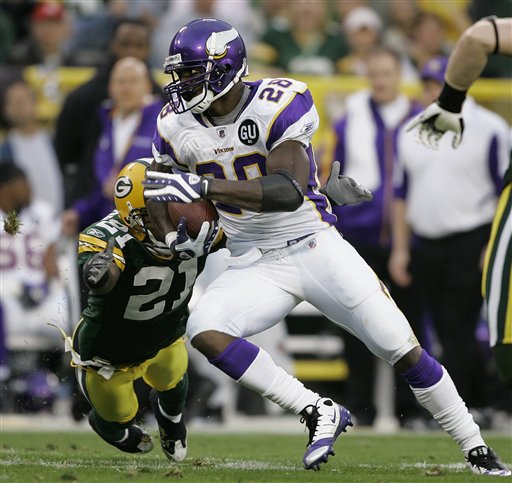 A different kind of ground game, but without Adrian Peterson the Vikes wouldn’t be 5-2

One wild card in this unique and exciting election campaign is the Obama ground game.    As Huffington Post columnist Paul Blumenthal notes, Obama’s ground game effort is unprecedented.   They are spending four times as much money in swing states than the Romney camp, with that many more offices and paid staff.   Already in states like North Carolina this is yielding high vote totals — levels which might not register in polls that screen likely voters.

In the swing states alone Obama and the Democrats are spending as much on the ground game as entire campaigns used to cost thirty years ago.  Will it work?

If it does, this could change the way politics operate.   Rather than focusing primarily on ads and big picture messaging, campaigns will delve more into social media, GOTV and the building of local grass roots networks to try to enhance voter turnout.

There is reason for Democrats to feel optimistic.   A study in 2009 showed that the Obama ground game flipped three states in 2008:  Florida, Indiana and North Carolina.    They made a difference everywhere, but in other states Obama’s lead was great enough that the ground game wasn’t the cause of victory.   The study tries to control for Obama’s overall popularity, an increase in minority voting, and other things that were happening even without the ground game.

Beyond that, Obama’s efforts have intensified even as reported Democratic enthusiasm has waned — very little can match the emotion of the 2008 campaign.    In 2008 the ground game ultimately got under emphasized because Obama’s win was decisive.   This year the ground game could decide the race. 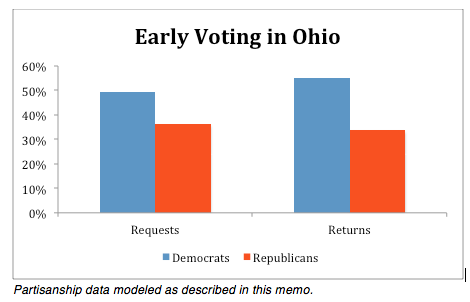 It’s hard to make sense of early and incomplete data, but the Democrats seem to be doing well in early voting in Ohio (this graph through 10-24)

Ohio, Florida, and North Carolina, states that Romney needs to win, all have early voting systems that benefit Obama’s ground game.   In Ohio and Florida early voting has been limited compared to 2008, though not as much as the GOP Governors and legislatures sought.    The reason, of course, was to try to blunt this Democratic advantage.  In Ohio there were efforts to cut the hours of early voting in Democratic districts while expanding them in Republican ones, as well as to limit early voting on the last weekend to the military only.    The US Supreme Court denied the latter effort, and the Secretary of State was shamed into abandoning the former.

Florida decreased the number of days for early voting and eliminated voting the Sunday before election day.   Black churches tended to bus people to the polls that day, enhancing minority turnout.    Florida’s changes led to court challenges and ultimately a deal was reached.

Five counties governed by the Voting Rights Act have been told they must have the maximum of 96 hours over eight consecutive days.   Other counties have chosen between 62 total hours the maximum of 96.   Early voting will take place from Saturday October 27 to Saturday November 3rd.    Florida also allows for mail in early voting, and there has been a lot of activity on that front. 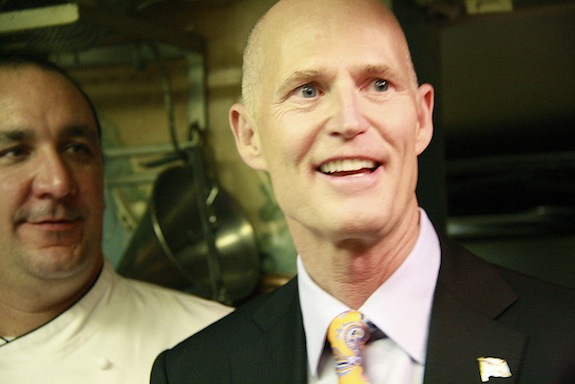 States like Colorado, Iowa and Nevada will be good tests of the ground game.   All three states have early voting for anyone who desires it.  In Colorado it starts 15 days before the election and ends on election day.   In Nevada and Iowa days and times vary by county, but in each state well over half the votes are cast early.

All of this makes the ground game potentially an enormous factor in the outcome.   There is more time to contact people, and those less enthused or likely to vote on election day may yield to the pressure (or embrace the convenience) of early voting. 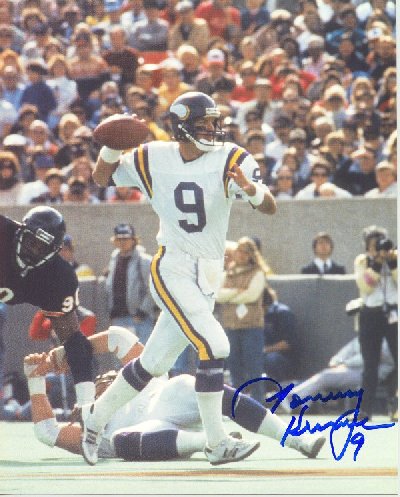 The air war – in football the passing game, in politics the TV ads – get most of the attention and generate the most excitement. But without a ground game, the impact may be limited.

No one is sure if this will be worth all the money and effort.   Perhaps spending four times as much as the GOP will yield only modest returns.   So going into the election I pose three hypotheses:

1)   Obama’s ground game will be decisive in all close states, even those without early voting.   If Obama wins in states without no excuse early voting, including Pennsylvania, Virginia, Michigan and New Hamsphire, this hypothesis is supported.   I’ll compare polls near the election with actual results; if Obama out performs the polls, that’s a sign that early voting made a difference.

2)  Obama’s ground game will be very effective in states with early voting.   If Obama is successful in states like Florida, Ohio, North Carolina, Colorado, Nevada and even Arizona, that will be a sign that a strong GOTV effort has a real impact on early voting.    If polls in states like North Carolina and Colorado show Obama behind but he pulls it out, that’ll be very strong evidence.    If he pulls off a surprise in a state like Arizona or others expected to go red but have extensive early voting, that will be very strong evidence for the efficacy of the ground game in states with early voting.

If Obama ends up winning decisively and carrying states that people expect to go red like North Carolina, expect the Democrats to make an intensive ground came a core part of their strategy.  After all their voters are historically less dependable than are Republicans, a mix of early voting and a strong ground game might shift electoral dynamics.    The GOP may have less to gain, but if they’re beaten on the ground expect them to not make the same mistake again.