The importance of the Presidential Debate 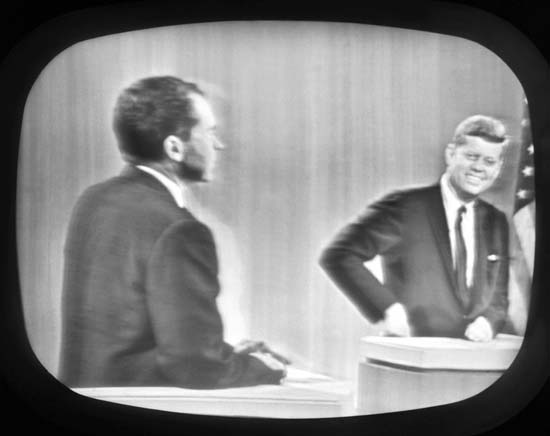 The first Presidential debate on October 3rd is important.   Even if it comes off bland and boring, it will have been important.     Here’s why.

Mitt Romney is down, but not out.   He finished September with a crawl, having two very bad weeks after the month started with the Democratic convention outshining the Republican show from Tampa Bay.   If this had been an election held in normal economic times, Romney would be in Mondale territory, a sure loser.

But it’s not a normal election.  The global economy remains stagnate, unemployment is over 8% and Obama hasn’t lived up to the hope people had for him in 2008.  It may be that no human could have met those expectations, but people are willing to vote the President out – if they think the other guy would be better.

Mitt Romney has yet to provide a compelling reason to think he should be entrusted with the Presidency.   Yes, he’s a successful business man, but we have oodles of those in the US in both parties; that alone isn’t enough to think he should lead the country.   Romney needs to use the first debate to shift the conversation and give people a reason to vote for him, not just against Obama.   If the Republican insiders decide Romney is an almost certain loser, money will start flowing down ticket and the Presidential campaign will become secondary to GOP efforts to win the Senate and keep the House.

But that hasn’t happened yet.    If he is to avoid that fate he needs to start the turn around on October 3rd.   The headlines the next day must indicate that Romney had a strong debate performance, the President didn’t seem quite up to the task, and that the defining moment(s) of the debate (the sound bites those tens of millions who don’t care to sit through 90 minutes of political banter will hear) broke for Romney.

If he can pull that off, he’s back in this thing and the poor polling weeks of September will not have been a death knell, but a trial by fire that the candidate overcame.

This makes it an especially difficult debate for both men.    Romney will go after the President with everything he has, and will do his best to surprise and maybe bother a President that can show irritation.   If the race were close, both candidates would play it safer.   That would mean it would be better scripted, but also that neither would be hit by something completely unexpected.   But with Romney needing to go for a big win, he can’t play it safe — and that makes it more dangerous for the President as well. 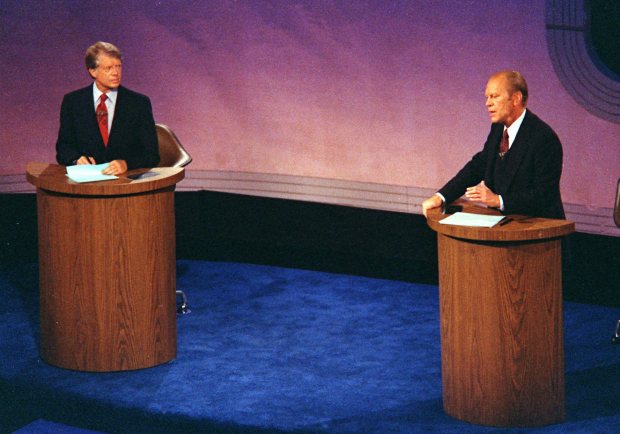 The 1976 debates between Ford and Carter started the current tradition of Presidential debate. Those early debates were less scripted and rehearsed.

What to look for?

1)   Body language.   If President Obama becomes stiff and more distant, it will show that Romney’s getting under his skin and pushing him off his game.    The President has to look at ease and comfortable.  Romney on the other hand has to appear genuine.  If his smiles look forced or he moves nervously, it’ll be a sign he’s struggling.   Both need to look in control and Presidential.  If one of them doesn’t, then that may do more to influence perceptions than anything they say.

2)  New Ground.   Both candidates might stake out new ground in the debate.   Governor Romney almost has to – he needs to give people a reason to believe he won’t simply go back to the policies of the GOP before 2008.   President Obama may offer some tantalizing new specifics too — choosing to introduce them here rather than at the convention.  New ground can force the other candidate off script because it provides something unexpected (though, of course, both try to anticipate what the other might do).    If Governor Romney can provide something new that is exciting – a headline of the debate – and Obama is unable to respond effectively, it could be break through moment. 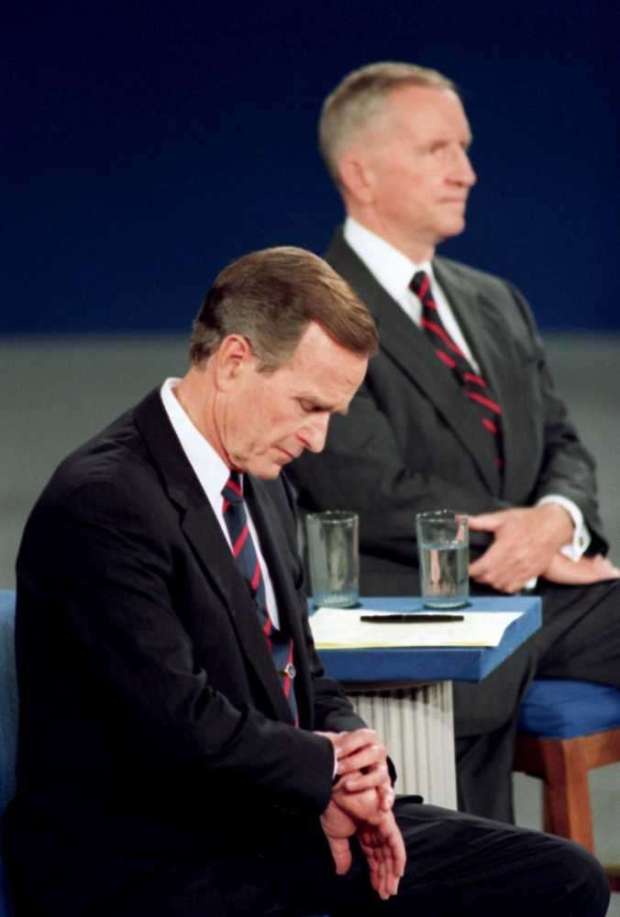 When Bush glanced at his watch in the 1992 debate with Perot and Clinton, his apparent disinterest helped fuel Clinton’s rise

3)  Foreign Policy.   With all due respect to neo-conservatives and other hawks, Governor Romney does not want to come off sounding like he’s ready to channel President Bush’s tough unilateralism.   This is a country still gripped by an “Iraq syndrome,” leaning isolationist and concerned more about home than abroad.    If Romney attacks Obama with a hawkish claim that Obama’s not being tough enough, Obama will say “Ask Bin Laden if I’m tough enough,” and then point out where tough talk and careless use of power led the country under the previous administration.   Romney should avoid foreign policy or trying to turn Libya into a scandal – that’s meat for the GOP base, but it won’t help him overall.

4)  Social issues.   Governor Romney has a dilemma.  If he could come off as an open minded moderate many independents would find him more appealing and he might alter the “gender gap.”    The trouble is that if he opens up on something like birth control, abortion or gay rights he might turn off a base that he needs out in force come November.  If he can create the impression he’s not a “severe conservative” on these issues without turning off his base, it’ll help him.

Reagan’s charm and delivery – such has his promise not to use the ‘you and inexperience of his opponent for political advantage’ in response to concerns about the 73 year old’s age – helped him use debates to his advantage.

5)  Zingers and one liners.   No doubt Governor Romney is practicing many of these, and President Obama may be focusing more on the response than trying to land a zinger.   It sounds like a good idea, and writers can come up with loads of possibilities.   The key is timing and delivery.  An ill timed zinger can seem weird, telegraphing that someone gave him this line and he wanted to use it.   It has to be delivered in a believable manner.   President Reagan is known for saying “there you go again, Mr. President” to Jimmy Carter in a way that made it seem Carter was exaggerating and Reagan was trustworthy.

But that line, if delivered with irritation or too understated might have seemed whiney or irrelevant.  Reagan delivered it masterfully and it is remembered to this day.   Walter Mondale did the same in his primary debate when he dismissed Gary Hart’s new ideas with “where’s the beef.”

6)  President Obama’s focus.  The President should focus on communicating to the people, almost as if Mitt Romney was not in the room.  If he can avoid letting himself get sucked into a one on one against Romney, he can play on his own turf, not Romney’s.   He needs to answer the questions, not get sucked into, well, a debate!

What not to look for:  a real glimpse at what either of them will actually do when elected.   Right now for both candidates the debate is about the horse race and focus groups.   That may sound cynical, but it’s true.   If either of them can convince people he is speaking with true substance and honesty, that candidate will do very well.   It’s the first rule of politics: “sincerity is key, and once you learn to fake it, then you’re home free.”  (Styx – “Fallen Angel”)