Posted by Scott Erb in Uncategorized on February 2, 2018

When The Selling of the President by Joe McGinniss was published, it raised eyebrows and concerns.   The Nixon campaign of 1968 was less an effort to persuade the American people that Nixon would be a good President than a marketing campaign.

What would happen if the politics of the country became no better than the competition between Coke and Pepsi?   What if instead of reasoned debate we simply had glitzy ad campaigns, with substance irrelevant?  Democracy requires an engaged and reasonably knowledgable citizenry.  Marketing campaigns do not.

The Trump Presidency has been marketing on steroids.   When he falsely claimed his State of the Union address was the most watched in US history, few were outraged.  Trump is a shameless self-promoter, and lies so often that people seem not to care.   But perhaps the most telling – and dangerous – is the controversy over the memo put forward by Devin Nunes, Chair of the House Intelligence Committee.  On its face it’s just another political game; in reality to cuts to the core of what we are as a nation. 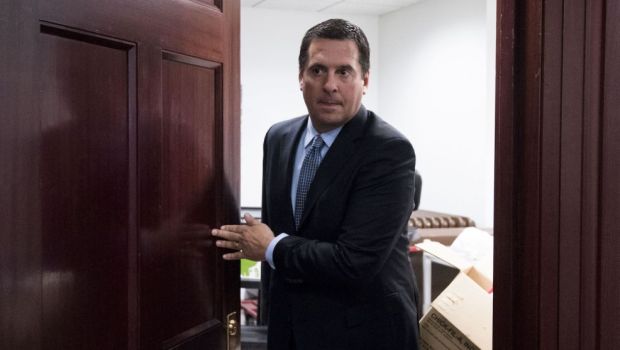 Devin Nunes is center of a storm that symbolizes our political dysfunction.

The facts are straightforward.   President Trump and people around him are under investigation for collusion with Russia to impact the 2016 election.  Trump hates this investigation.  He fired James Comey, the last FBI director, for pursuing the issue.   He has attacked and bitterly condemned Robert Mueller, who was chosen to head the investigation.

The Trump team are worried.  While existing practice makes it unlikely the President will be indicted for any crime, people close to the President may be implicated (some already have) and there is a potential to severely weaken an already embattled President.  So like good marketers, without regard to truth, they have decided it’s best to try to discredit the investigation, which means attacking Mueller, the FBI and the Justice Department.

That’s huge – the White House is virtually at war with its own justice department.   Trump is reportedly fuming that “his” people can’t simply stop this investigation.  It’s the “Trump Justice Department” after all!  And in corrupt countries, that would happen – the power of the leader trumps rule of law.

The US has a long tradition of putting law first, and the FBI and Mueller have refused to back down.  Enter Nunes.  He decided to take information available from a variety of sources and cherry pick anything that might lead one to question the FBI’s actions, and put them into one memo with the sole purpose of discrediting the FBI investigation.

FBI Director Christopher Wray, Trump’s choice to replace fired James Comey, is in the hot seat over the FBI memo.

Stop here.  This is astounding.   The Head of the House Intelligence committee creating an overtly political “memo” based on cherry picking claims and interpreting them in a way to make the FBI look bad (while ignoring the majority of evidence) is NOT something one expects in a country governed by rule of law.  It is an effort to undermine trust in law enforcement in order to politically protect the President.   So much for Congress checking Presidential power!

This is surreal.   It is absurd.   It upends traditional practice and the sense that after an investigation we let the facts speak, without turning it into a political circus.

But that was a bombshell that shocked the political establishment and helped lead to Nixon’s demise.  Here Congress is actively trying to find cover for the President to halt the investigation, directly attacking American law enforcement in so doing.

If the memo is released, it will pressure FBI Director Christopher Wray to resign – he has strongly opposed releasing a flawed and overtly partisan “memo.”   It will challenge Republicans to think hard about the cost of politicizing this investigation  to the point of attacking the FBI.

Democracies usually don’t collapse, often one compromise against rule of law starts a cascade until it seems normal to simply do what is necessary to keep or gain power.  If this memo is released, the strength of our democratic system will be tested.  If this derails the investigation and puts the FBI on the defensive, then there is a chink in the armor of our democratic institutions.   As surreal as the spectacle might be, the reality is that democracy and rule of law are at stake.