Secretariat races to victory in the 1973 Kentucky Derby

So how’s is the Presidential campaign going?    Is Romney like Secretariat, coming up fast from the back to race past and leave Obama in the dust, or is Obama like a pennant winning baseball team recovering from a nine game losing streak and holding ground.   I know some readers HATE sports metaphors about a decision so important to the lives of real people.   I apologize, but campaigns are contests, and the strategies and dynamics behind them can be fascinating.

The race for the Presidency has gotten hyper-confusing for those who watch polls and try to make sense of the shifting trends.   Supporters of Governor Romney look at narrow  leads in national polls and very close state polls to conclude that their man has the momentum and the race has turned in their favor.    Some hope that this continues and Romney wins in a romp.

Obama supporters, who last month saw polls that made the race seem all but over, are clearly spooked.   Having the lead and losing it is emotionally more draining than being behind and catching up.    They take solace in the fact that Obama still tends to lead swing state polls and his path to victory seems wider than Romney’s.

The best news for Romney’s people comes from Gallup, whose tracking poll has shown Mitt holding a six or seven point lead for half a week.   Obama backers take solace in the numbers at intrade.com.   Long a favorite of free market conservatives, it’s a market where people bet on who will win.  Right now the  money is on Obama, giving him a 60% chance of victory – and intrade has a strong track record.

At some level the chaos of the current state of the race is a function of being right in the middle of it, with new polls every day and debates every week.   Stepping back, the race can be seen as actually rather stable.

The two spent the summer where they are now – virtually tied.   President Obama then had a very good September as the Democratic convention’s optimism and excitement combined with the infamous “47% tape” from Romney to give Obama a clear lead by late September.

Yet Obama’s lead was fragile.  It depended on the public having an extremely low opinion of Mitt Romney.   This actually worked in Romney’s favor in the first debate.   He shifted to the center and appeared not at all like the man in the 47% video.   Moreover, the election was being recast about the economy and the future, the 47% thing looked like a petty “gotcha” moment.   The race returned to where it had been – the two neck and neck.

So where are we now? 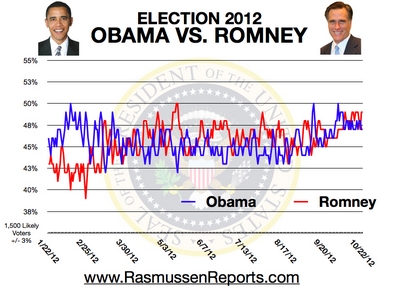 Rasmussen’s chart shows that despite twists and turns, the race has remained essentially very close

National polls show Romney with a slight lead.   Today most polling shows Romney up 2 or 3 points.   In an election this close those numbers need to be taken with a grain of salt.   Shifts of four or five points are common simply due to the nature of polling.     After all, if Gallup is kind to Romney, IBD/TIPP is being kind to Obama.    Swing state polls still seem to lean slightly towards Obama. 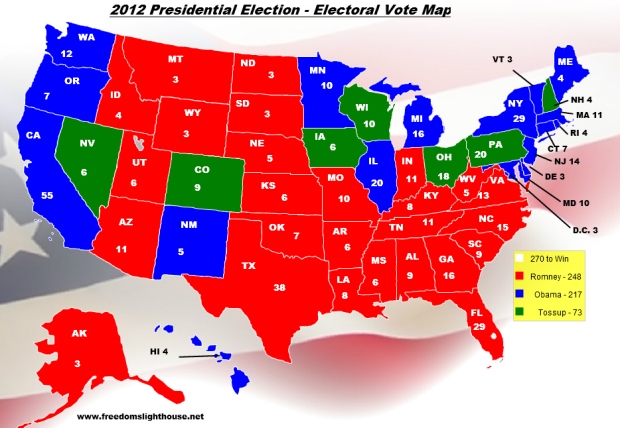 Polls give limited information.    Not only are they “snapshots,” but methodology matters, especially in a race this close.   Pollsters try to discern likely voters from registered voters.   Each polling company has a screen, some (like Gallup) are more intense than others.    If the questions and data used to determine who is likely to vote are off base, then the poll results will be off.     Moreover, the full impact of the get out the vote (GOTV) efforts and early voting are unclear.

Consider:  President Obama’s campaign has massively invested in building a get out of the vote effort that dwarfs even their 2008 ground game.   Republicans haven’t gone beyond their usual efforts.  Does that matter?  That’s a big if in this election.   If it turns out that the polls understate Obama’s share of the vote, that will be strong evidence that Obama’s ground game worked.  If not, then one has to question how effective intensive get out the vote efforts might be.

What about claims that Rasmussen and other Republican leaning pollsters are creating an illusion of a Romney resurgence?   That is only partially borne out by the evidence.   Here is the swing state (major) polling since October 14th.  The first column does not include Rasmussen, Gravis or We ask America.   The second does.    In Colorado, Virginia and Florida the additional polls do cause swing towards Romney.   I have two listings for Florida, the second removes a Zogby poll that had Obama + 6.

* One after I posted this, a New Hampshire poll from WMUR came out with Obama up 9.  The polls are all over the place.  I keep track of the polls I follow here.

However, the national polls have been trending towards Romney in recent days, including the ones that show Obama with a lead.   Since trends affect all states, this could indicate that the swing states will tighten up more or shift to Romney.   Moreover, when races are within a few points of each other, all poll numbers have to be seen as fallible.

1.  Obama is clinging to a narrow lead, especially in the important swing states;
2.  Romney seems to still have some momentum, though the race has stabilized;
3.  Get out the vote efforts and turnout will make a difference in very close states; and
4.  The next two weeks will be really intense!