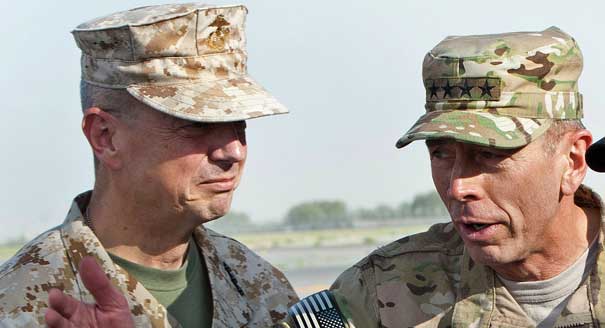 Last Thursday the students in the Honors first year seminar headed down to Colby College in Waterville to see a modern production of the Aristophanes classic Lysistrata.    It was hilarious.

Colby College Theater Department chair Lynne Connor adapted it and injected it with modern themes, ranging from binders of women to frustrated men walking around with toy light sabers positioned like male erections.    A subtheme of the whole play was the role of women as a potential force against war, as well as the insanity of war in general.

The age old themes of women, men, sex and warfare had a turn for the bizarre with the news that first CIA Director David Petraeus and now General John Allen, a four star general commanding forces in Afghanistan, may be brought down by indiscretions involving attractive women connected with the military.   Aristophanes would smile – la plus ca change, la plus c’est la meme chose – the more things change the more they stay the same. 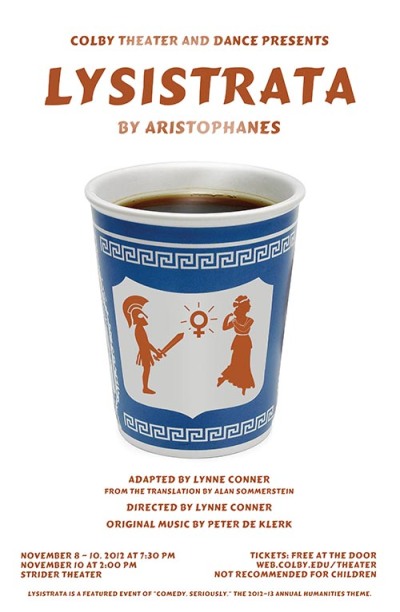 Given events, Colby’s production of Lysistrata was well timed

The scandal started with jarring news directly after the election that David Petraeus had resigned as CIA director due to an affair with Paula Broadwell.   Broadwell, a beautiful and athletic women in her late thirties, had observed Petraeus in order to write a book about his leadership skills.    Though they worked together from 2008 onward, the affair apparently started in 2011 after Petraeus left the military.

They thought they had it hidden.   Borrowing from al qaeda methods of communication, they shared an e-mail account and left messages as drafts in their files.   Each could access the account and read the drafts.   Clever.   At this point not much more is known about their relationship, though Broadwell’s father says there is “a lot more than meets the eye” and that new revelations are likely.

The FBI started investigating when another woman, Jill Kelley, reported receiving harassing e-mails from Broadwell in July 2012.    The FBI quickly determined that Broadwell sent the e-mails.   In so doing they found the gmail account used by Petraeus and Broadwell to discuss their affair.

In September US Attorney General Eric Holder was notified of the investigation.  The FBI said they didn’t think there was any security breach but wanted to continue to investigate whether or not Petraeus had a role in the harassing e-mails.    On October 27 Republican House majority leader Eric Cantor was notified as well.   At this point it seems that people wanted to keep the matter quiet.  If it’s just an affair, better to not have it destroy the career of Petraeus, whose success in Iraq helped make him a national hero.   Holder didn’t tell the White House or Director of National Intelligence James Clapper; Cantor didn’t tell House Speaker John Boehner.

Something happened after the second FBI interview with the principles in late October.   Within a week, Petraeus had resigned.   (UPDATE:  According to the Washington Post, it may have been Cantor’s involvement that actually caused the case to go public.  In their report Petraeus is indeed a subject of the e-mails sent to Kelley, and the FBI was relaxing the investigation when an upset agent contacted a Representative who contacted Cantor who called the FBI director…I’ll not add any more updates to this fast changing story.)

Attractive, athletic, married and a mom, Paula Broadwell made the rounds selling her biography of David Petraeus, “All In.”

Even as jaws were dropping about Petraeus’ resignation the issue got more complicated.   Jill Kelley is the social liaison to MacDill Air Force Base in Tampa, home to the military’s Central Command and Special Operations Command.   She and her husband have been friends with Petraeus and his wife for a long time.

While at first some thought this could be a love triangle, it appears that the e-mails hardly mentioned Petraeus and were more like a “cat fight.”   Broadwell apparently thought Kelley was strutting around the base with too much verve and should be taken down a notch.   Kelley was mystified by these mysterious but troubling e-mails and notified the FBI.   Since the e-mails contained no overt threat the FBI almost didn’t investigate.   After consulting the laws they decided there was enough to warrant looking further.

Was it just childish jealousy that caused Boadwell to start harassing Kelley?

That the commander in Afghanistan spent so much communicating with a party planner in Tampa raises eyebrows.   For now hearings scheduled this week for his promotion to head the US European Command and become Commander of NATO forces has been put on hold.   If he did have an affair with Kelley he could face a court-martial as adultery is against Army law (Petraeus smartly started his affair after he left the military).   He claims there was no wrong doing.

What to make of all this?   Well, Broadwell’s book about Petraeus received a sales boost from the news, even if her husband had to cancel her 40th Birthday party.     Holly Petraeus is justifiably outraged:  a good military wife for 37 years and her husband cheats with a woman who appears to be an egomaniac, albeit a well built and attractive egomaniac?

But is there more?   Tweets with Broadwell and Karl Rove have surfaced, rumors about Libya — did the CIA hold prisoners in the Libyan embassy that the attackers wanted to free? — and a host of other questions swirl about.  All of this has a kind of soap opera quality, something Jon Stewart mocked as “Spyfall.”   For now we have wait and see how this will unravel.   A few lessons though:

1.  All would be cheaters who want to use sneaky facebook or e-mail account tricks to hide your affair – don’t try.   If the head of the CIA using al qaeda like tactics can’t even get away with hiding his tracks, anyone can get caught!

2.   Pillow talk and sexual desire can take down even the strongest and most powerful among us, from Sampson and Delilah to Petraeus and Broadwell.

3.   The themes of sex, power and war that Aristophanes explored over 2500 years ago are valid yet today.   For all our progress and technology, men still think with their light sabers.

This entry was posted on November 13, 2012, 11:12 and is filed under Afghanistan, David Petraeus, Libya, Scandal. You can follow any responses to this entry through RSS 2.0. You can leave a response, or trackback from your own site.