The frustrating thing about violence like this is that observers tend to join the combatants in forming two camps.   The pro-Israeli side condemns the Palestinians for engaging in terrorism, and dismisses concern about innocents by simply blaming Hamas.   In the US sympathy for the Palestinians in Gaza is dismissed by pro-Israel hawks as “anti-Semitic,” or akin to support of the Nazis.    Never mind that a large number of Jews in Israel form the backbone of an Israeli peace movement even more radical, the pro-Israel side often paints the world in stark good vs. evil tones. 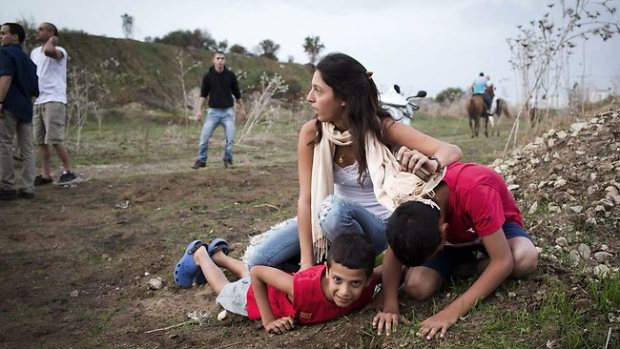 On the other side are the defenders of the Palestinians, pointing at the big bad Israeli military hurling massive weapons into Gaza, killing women, children and other defenseless folk.    They rationalize Hamas’ missile attacks into Israel by pointing out the horrid conditions in the occupied territories and how Israel’s grip limits economic opportunity and leaves millions with no real political and economic rights.   For them it’s good vs. evil as well, but the Palestinians are the victims, fighting out desperation for a better future against a ruthless foe.

Go on line and follow blogs and news sites for each side and you’ll find two self-contained narratives wherein it is absolutely clear that one side is right and the other wrong, with little ambiguity or uncertainty.   Of course, which one is right depends on the side you’re following.

The reality is that ambiguity and misunderstanding define this conflict, while the capacity to paint it in stark black and white terms makes it harder for each side to truly understand the other.    In turn, that makes it more difficult to solve the conflict.   But the Arabs won’t drive the Jews into the sea and the Jews won’t drive the Arabs into the desert.

Consider this case.   Border clashes leave a Palestinian youth dead.   Mad at that and other IDF (Israeli Defense Force) actions Hamas shoots missiles into Israel.   In Hamas’ mind it’s a tit for tat, they’re retaliating.   For Israelis shooting missiles into residential areas is an escalation – the IDF was engaged simply in protecting Israel’s security.   So they retaliate hard against Gaza.   Hamas then retaliates back, upping the ante.

Emotions are ignited on both sides, the conflicts grows in intensity, and soon we have a full blown crisis that apparently neither side planned or wanted.   Protests world wide show sympathy to the residents of Gaza, while supporters of Israel grumble that the media is unfair and doesn’t understand that no country could tolerate missiles being launched across the border into residential areas.   Two legs good, four legs evil.   Or was it four legs good, two legs evil?

The reality is far more complex.   The Palestinians have suffered and often have been treated unfairly and denied dignity by the Israelis.   Hamas did send missiles into Israel in an action no state could ignore or just accept.   Hamas is a terror organization which could end this by renouncing its terror tactics and stopping the bombardment.   Israel does keep the Palestinians on the leash that naturally breed resentment and anger.     That’s why each side is so adept at seeing themselves as the good guys – each side has evidence to that effect.

At this point its foolish to try to say one side is “more to blame.”   That falls victim to that same capacity to choose evidence and make interpretations that will see one side as essentially good and the other as the cause of the violence.  The first step out of this is to see it as a problem to be solved, rather than enemies to be defeated.   Neither side can win unless they both win.   That can only happen if they solve the fundamental problems they face.

There is a reason why war maker Yitzak Rabin became a peacemaker, reaching agreements with the PLO in 1993.   There is a reason why ultra-hawk Ariel Sharon ultimately proposed unilateral withdrawal from the occupied territories after running a much a different platform.   An objective look at Israel’s security interests makes clear that on going conflict is harmful to Israel, especially with the rise of non-state actors like Hamas and Hezbollah.   The Arab states never really could pose an existential threat to Israel.  The non-state actors?   That’s a different story.

So how to solve the problem?   First, the two sides need to agree to a cease fire.   Israel should not try for a ‘military solution.’   Invading Gaza will be no more effective than invading Lebanon in 2006. Even if they damage Hamas, the conflict will be intensified and Israel will be no more secure.

This will create dilemmas for both the PA and Hamas.   The Palestinian Authority doesn’t want to be seen as abandoning Gaza.   The only way they can possibly break from Hamas is if Israeli military action in Gaza has ceased.   Israel would also have to renounce some of the new policies they have for settlements in the West Bank, as well taking a softer line on the Palestinian Authority’s efforts at the UN.

Some would see that as Israel giving into pressure, but it’s a clever “giving in.”  If done in a way that undercuts Hamas it would be a victory for Israel.  Hamas might respond by upping the ante with more attacks.   But a more likely response would be to communicate to the PA the need to be on the same page and try to influence the negotiations.

Much conspires against such a solution.   Can Israel really pivot to a political effort to isolate Hamas rather than a military effort to defeat it?   Will Israel and the Palestinian Authority be able to make enough progress on past roadblocks to negotiation to make real communication between the two feasible?   Will the PA be willing to risk “selling out” its rival Hamas, and will the Arab world side with the PA over Hamas?   Still, despite the mess, this could open up the chance for a real move forward.

The phrase may be over used but it’s true – in every crisis there is an opportunity.