Todd Akin (R-MO) simply said what he and other anti-abortion activists truly believe.

Most Republicans I know are reasonable, intelligent and thoughtful people.   We can disagree and have good intense discussions, and often find that we agree on more than we realize.   Not being a straight ticket voter, I vote for Republicans in a variety of races and have always admired Senator Olympia Snowe.   So my heart goes out to all the reasonable Republicans out there who are finding their party being hijacked by the crazies.

The most recent example is Todd Akin from Missouri who is defying pressure from within his own party to drop out of the race.    While a lot is being made about his comment that a woman who suffers “legitimate rape” will have their body shut down and thus not become pregnant, his view represents a strain of thought that is rather common amongst the anti-abortion activists.

The vitriol against moderates became too much for Senator Snowe

Here’s the deal:  the hard core anti-abortion folk (who also wrote the anti-abortion plank of the Republican platform this year) believe abortion is wrong in all circumstances, including incest and rape.   OK, there is a logical consistency to that.  If it’s murder to kill a fetus conceived by a loving couple, it’s no less murder if the fetus was conceived via rape.   If you think the fetus is a full human, then it’s just as wrong to abort it at three weeks as it is to kill it 23 years after birth.

But that creates an ethical quandry.   Women who have been traumatized and now are pregnant with a baby conceived by rape often lack love for the potential child and have no desire to change their whole life in order to bring a child into the world.   Most people — a vast majority — think abortion is OK in cases of rape and incest, or when the mother’s health is endangered.   More importantly, this quandry convinces a lot of conservatives to make exceptions in their anti-abortion stance, something the extremists can’t stand.

He’s probably never heard of the Higgs Boson either

So they make up a pseudo-factoid.    Women who are victims of forcible rape (which Akin in his apology said he meant to say) have their bodies shut down and thus do not become pregnant.   Rep. Steve King of Iowa said that he’s never heard of a pregnancy resulting from forcible rape or even statutory rape (huh?).  This is very convenient, especially for male anti-abortion activists.   There is no more ethical quandry — if a woman gets pregnant from rape, it wasn’t really rape.   It was either consensual or, at the very least, she must have enjoyed it.    Convince other activists to believe this, and pretty soon you have a neat, convenient world view that doesn’t require taking a harsh, unpopular ethical stand.

One can respect yet fiercely disagree with the principled pro-life stance.  But efforts to evade unpopular moral dilemmas by essentially blaming pregnant rape victims for their plight must be condemned.    Yet such views are common; Paul Ryan’s “pro life” rating is 100%, while Akin’s is only 90%!

There have been other examples of crazy.   Michelle Bachmann and her gang of  bigots tried to claim that Muslims were infiltrating government and affecting US policy.   Hey, it worked for Joe McCarthy!   Republican party leaders were aghast, rejected the claims, and yet realized that this blemished the GOP brand.   John McCain launched a blistering attack on Bachmann’s allegations on the Senate floor, but the damage was done.   And then you get the minor crazies, like Texas Judge Tom Head who claims that we could have civil war if Obama is re-elected because — get this — Obama wants to hand US sovereignty over to the UN and invite the UN army into the country (never mind the fact that the UN doesn’t have an army).

For a different kind of crazy, head south to Texas.

So far Mitt Romney has hurt himself by trying to appease the extremists.    He’ll lose the Latino vote thanks to his claim that illegals should “self-deport,” alongside his promise to oppose immigration reform.   Yeah, he can back track — shake the etch-a-sketch and try again — but the clip is out there and certain to be part of more than a few Latino-focused campaign ads.

For the Republicans, this is mess they brought on themselves.   Since Reagan was elected in 1980 the formula has been the same: give voice to some of the radical fundamentalist positions to get support, and then ignore them when governing.   Reagan could wax poetic on his pro-life stance, but never made it a priority in his Administration.   Karl Rove wooed the religious right to support George W. Bush because they provided high voter turnout, enthusiasm and money.   Yet their influenced declined after the election.

But in 2010 the crazies started to take over the asylum.   The GOP calculus went awry.    Candidates like Sharon Angle, Christine O’Donnell and Ken Buck assured that the GOP couldn’t win the Senate in their big 2010 landslide, and they barely escaped disaster in Alaska with Lisa Murkowski’s write in campaign.    High profile “tea party” candidates bring with them the baggage of extreme and unpopular views.   This year the damage continues.   The GOP has to win four seats from the Democrats to gain control of the Senate.   Yet two sure seats — Lugar in Indiana and Snowe in Maine — are in jeopardy because of the extremists.  Mourdock beat Lugar in the primary, and Snowe retired.

Tea party victories in 2010 also keeps the House in play — the Democrats would have to win a lot of seats, but due to the extreme positions of many freshman, it’s possible.   If the GOP were seen as a pragmatic party focused on improving the economy and reducing government, Romney would probably easily defeat President Obama and the Republicans might have another landslide.   As it is their positions on social issues and the crazy soundbites coming from the wings create distractions and provide energy for the left. 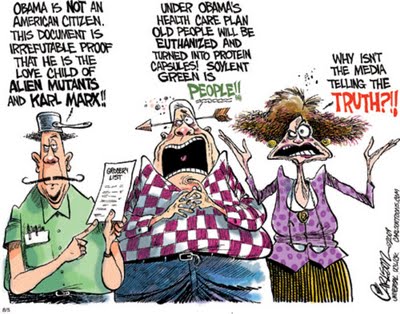 GOP leaders have tolerated this — and feared the backlash if they didn’t — for too long.

Yet party leaders fear alienating their so-called “base.”   Even Romney’s refusal to endorse Akin has led to a backlash from anti-abortion activists.   The result is likely to be vast majorities for Obama amongst both women and Latinos.   Romney will get a smaller percentage of the black vote  than McCain received in 2008.   This means that Romney’s path to victory is very difficult thanks to how he and his party have tolerated/embraced whacky ideas.

Yet again, most Republicans I know don’t hold such crazy ideas.   Many of them have strong arguments about limited government and the need to reform social welfare programs.   Yet that gets drowned out by the crazy talk from people like Akin.

Extremists disbelieving evolution, dismissing the 98% of climate scientists who insist global warming is real and mostly human made, and embracing ideology-driven beliefs about reality are dangerous.

Mitt Romney needs to take a stand.  He needs to call out the crazies for what they are, embrace the moderation he showed as Governor of Massachusetts and save his party from the extremists.   If he does he’ll win over a lot of independents and counter the image that he’s a wimp willing to say or do whatever it takes to win.   In this case it appears he has no core and is weak, trapped by the fringe.   Leaders don’t get trapped, they lead.   Mitt, take on the fringes of your party in order to save it — otherwise, prepare for defeat.

(By the way, did anyone catch my rock and roll pun?)

This entry was posted on August 24, 2012, 00:44 and is filed under 2010 Elections, 2012 Election, Barack Obama, Democrats, Republicans. You can follow any responses to this entry through RSS 2.0. You can leave a response, or trackback from your own site.