A series of polls that cascaded into each other and two hot tubs was a new kind of swimming experience!

Usually when we’ve thought about trips to the Caribbean we’ve hit a price barrier.   It’s too expensive, or the inexpensive places are not necessarily best with kids.    This year, we finally figured out what to do: go during hurricane season.   That’s the “low season,” and many wonder why anyone would want a tropical get away in mid-August?   That’s for the middle of winter, isn’t it?

Not at all.   At least not in the case of San Juan, Puerto Rico.   Not only is the tropical paradise just as enjoyable and real in August as it would be in February, but the place has so much to offer that we only got a taste in our five days there.  I definitely want to go back.

First, the hotel.   We stayed at the Caribe Hilton (pictured in the previous post ‘Back Next Week’), located on the shore with both an ocean beach and the series of pools pictured above.   The deepest pool is only about 4 feet, another is 3 1/2, and then there’s a toddler pool.   There is also a bar pool, serving drinks.    We ran up a bar tab of about $70 in five days.  That was a total of five drinks…averaging half a drink per person, per day.   But they were delicious!

The way to book this is to go to http://www.cheapcaribbean.com/ and book something for Mid-August probably into September.   That’s the hurricane season, but most hurricanes go around Puerto Rico.  Statistically, it’s a risk worth the very good deal you’ll get.   They’ll find cheap plane tickets and offer a rate that was 33% less than what Orbitz or Expedia were asking.   If you’re really worried about hurricanes they had an option for a 75% “cancel for any reason” insurance.   This makes a top class resort affordable, as long as you don’t go crazy buying drinks or eating at their on premises restaurants.

In five days we managed to fit in three distinct themes.    With kids aged 6 and 9 we spent a lot of time swimming on the beach and in the pools (which the kids absolutely loved — they would have been satisfied spending the day swimming at the hotel if we’d let them).   We also avoided late nights and didn’t over schedule.

The first theme was Old San Juan.   The city is remarkable.   We went three three of the five days, exploring, eating, and visiting the favorite square of the kids: plaza de armas.

At Plaza de Armas the boys loved feeding the pigeons.   The pigeons would perch on their arms, sit on their head, and they’d have fun with a bunch of other kids throwing seeds out to the birds.   San Juan locals sold seed for $1 a bag.   The same folke were at the square all three times we visited, hanging out and selling seeds.    I admit I was a bit discomforted by the enthusiasm the kids showed for these “flying rats.”   But a promise of going to where the pigeons are got them out of the pool and willing to venture into the city!

Old San Juan had charm, two amazing fortresses, beautiful streets and homes, and delicious food.   We stopped at tacky souvenir shops as well, but it was fun to explore.

Cola Falls, in the Rain Forest

We also booked a half day tour of the rain forest, El Yunque.  It was good in that it gave us a real taste of what the rain forest has to offer.  We stopped at the Visitor Center, Cola Falls, Yokahu Tower for some distance views, and took a short hike.   Alas, it was quick — next time (and there WILL be a next time) we’ll rent a car and explore it further.  We didn’t get to the falls you can swim in because it was too long of a hike or this tour.

Our short tour of the rain forest left us wanting more

On our last full day there we went snorkeling.    We used East Island excursions, which picked us up at the hotel with a van and took us to the coast near Fajardo.    There we boarded a catamaran for a 45 minute jaunt first to an island with a beautiful sandy shore.   We learned to snorkel there, saw a small reef, and had fun swimming and eating lunch on the boat.  15 minutes away was  a larger coral reef which was beautiful.   Between it, schools of fish, and about an hour of swimming in the beautiful ocean, the trip was well worth its while! 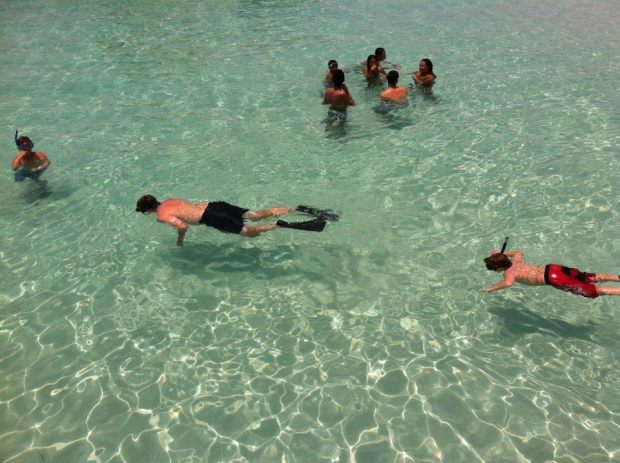 Practicing snorkeling near an island – paradise!

The boat itself – East Wind – was an experience.   They had free drinks (weak ones), food, and made the voyage seem like a party.  The kids could order pina coladas as well, albeit sans alcohol.   There was a water slide, and the crew kept things fun.   It was a worthwhile excursion – I’d recommend East Island Excursions to anyone traveling there.   We wanted to go on their bioluminescent bay tour, which would have been great given we were there at a new moon.   But it was from 3:30 to 1:00 AM, and ultimately we decided it would be a bit much for the kids.   Next time.

The East Wind sail boat took us to our snorkeling destinations

In all, it was a relaxing and enjoyable trip.   It gave us a taste of what Puerto Rico has to offer, and allowed us to enjoy a resort experience for a very reasonable cost — our room at the hotel at the Bangor airport was more for one night than the Caribe Hilton!  (We needed that because we took off at 7:00 AM, and had to leave our car there for the duration of the trip).

We didn’t experience all the rain forest has to offer, the San Juan night life, or as much of Puerto Rican cuisine and culture as we’d have liked.   We almost rented a car to explore the island, but decided not to.  With kids and a lack of knowlege of what the place has to offer we weren’t overly adventurous. Yet we gathered info that we can use for our next trip.   Ahhh, now I have to get ready for the new semester, feeling refreshed, revived and well tanned!

My cheap camera can’t do it justice, but this was the view from our balcony that I enjoyed every night, sitting and just taking in the atmosphere!