In a famous feud, Voltaire and Rousseau argued about the nature of God.    Both were Deists.   Deists didn’t doubt that there was a God.     Following Newton, a “world in motion” had to have a first mover.   Moreover, how could such an intricate and elaborate universe have come into being without a creator?   Beyond that, though Deists had different views.

Jean Jacques Rousseau (1712-1778) believed that God was a loving God, with nature being God’s true Bible, his message to humans.   Rousseau was convinced that the worst mistake humanity ever made was to leave the state of nature and form communities, generating artificial “needs” and desires.   He would no doubt be sickened by how humanity is now literally poisoning the planet and producing genetically altered plants and animals.

Voltaire (1694-1778), the pen name of François-Marie Arouet, did not share Rousseau’s optimistic view of God.   On November 1, 1755 Lisbon Portugal had a massive earthquake.   It was as strong as 9.0 on the Richter scale, destroyed 85% of Lisbon’s buildings and killed perhaps 50,000 of Lisbon’s 200,000 inhabitants.  It inspired the philosopher Immanuel Kant to develop the concept of “the sublime.”

(At the same time the Empress Maria Theresa of Austria was in labor – on November 2, 1755 she would give birth to her daughter Marie Antoinette, who would later be married off to the future king of France). 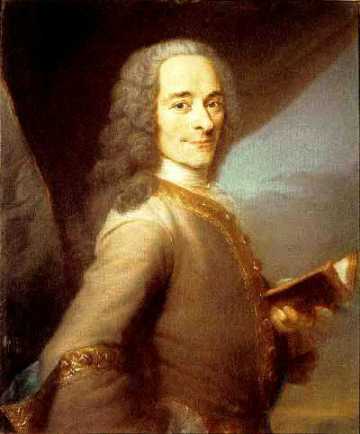 Voltaire, who already was suffering from personal tragedies, visited Lisbon and was sickened by what he saw.  Utter destruction, massive death, and survivors in misery.  Horrific suffering thanks to nature.   How could this be the handiwork of a loving God?  Why would God allow such misery to occur?

Rousseau offered an answer.    Nature is God’s message, and God is love.   So the problem must be humans.    God clearly doesn’t want us congregated into huge crowded cities.    People living on the country side could avoid the massive suffering caused by the earth quake.  It was a message: cities are unnatural, if humans create them and natural disaster hits, blame people, not God.

This infuriated Voltaire.   He had seen the suffering with his eyes and could not believe that Rousseau was blaming innocent victims for their peril.   But Voltaire was not sure how to respond.   Could God really be a horrific brute that reigned terror on humanity?   But if God was loving, how could he allow such suffering?

He pondered Gottfried Leibniz’s (1646-1716) explanation for the existence of evil, that of all the possible worlds that could exist, this one was the “best possible.”   Yes, bad stuff happens, but you could not have humans with free will without the potential of negative consequences.   Thinking of the scenes from Lisbon, Voltaire wondered, “is this is the best of all possible worlds?”

So Voltaire did what most writers do when stymied, he wrote.   And wrote.   The product of his work was a book called Candide, or Candide or the Optimist.   It is long, humorous, fast paced and satirical.   Candide is studying with Pangloss, a teacher who follows  Leibniz and Rousseau in saying that all works out for the best.    Within the book they even visit the scene of the Lisbon earthquake.   Candide asks if he should save a man who is drowning and Pangloss replies that he need not bother – if God wants him saved, he’ll be saved.  (Pangloss in Latin means literally “all word”).

By the end of the book Candide rejects Pangloss’s argument that all turns out as it necessarily must, for the best.   Instead, Candide says, “we must cultivate our own garden.”

That still inspires artists and thinkers to this day – click below to watch a video of Rush’s song “The Garden,” which lyricist Neil Peart said was inspired by Candide:

To be sure, there’s considerable debate over what exactly Voltaire meant.   I read it to suggest that while there may have been a creator, it’s not at all clear that the creator cares about or even pays attention to his work.   Perhaps God is out creating other worlds.  In any event, God doesn’t need our love, other humans need our love.   Rather than worshiping God or looking to him for salvation or support, we should be help each other.

Voltaire’s pragmatic argument was the beginning of what is now called “secular humanism.”   It is humanist because humans are the center – we are to help others, improve the world and use reason to take responsibility for the world we construct.  It is not the best of all possible worlds, but a world in need of improvement.    It is secular because God is irrelevant.  Praising God does nothing to help feed the poor or take care of those in need.   Better to put our energy towards making the world we find ourselves in a better place.

Voltaire marked a move towards truly putting reason first for creating ethics.    We are to use reason to figure out how to make the world better, improving conditions for humans.    Given conditions in France at the time, Voltaire could correctly blame the Church and its traditions for a good portion of human suffering going on in cities like Paris – suffering that would ultimately lead the people to revolt.

Yet perhaps there is a middle ground.   This may not be the “best of all possible worlds,” but that doesn’t mean that reason alone provides meaning.   Reason only leads one to work to better humanity when you take as a goal a humanist belief that the well being of humans is the ultimate value.    Yet reason does not give us proof for that value; reason can be used by fascists, Nazis, racists, nationalists and communists to justify their ideology.   Reason is a tool, not a means to discover principles and value.  Indeed after the French revolution people who thought they shared common principles turned into bitter enemies and society broke down. 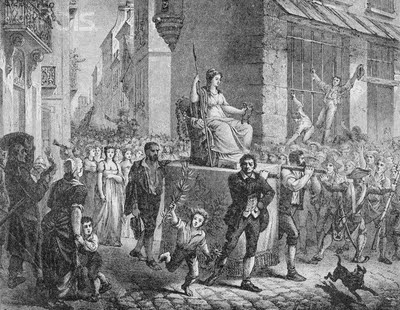 It does not have to be religious belief nor a traditional concept of God (though it can be).   But the fact we are alive in a world with no clear purpose or reason — the fact there is something rather than nothing — strongly indicates that we are only glimpsing part of reality, and not the part that tells us the “answers.”   Modern physics in fact says light is both a particle and a wave, and particles are actually just ripples in fields and not actually “stuff.”

Atheists often say that only things with measurable material consequences are relevant for understanding our world.   Yet that materialist view ignores the fact that perhaps the parts of reality we don’t experience in material terms do come through in our emotions, intuition, and inner sense.  For lack of a better word we call that “spiritual,” and it runs the gamut from magic new age crystals to Buddhist meditation and both traditional religious and non-traditional beliefs.  Perhaps we can use a “God concept” to explain whatever power gives substance to the universe.

That still doesn’t settle Rousseau and Voltaire’s dispute.     Rousseau believed that civilization muted our natural compassion.    Voltaire believed that civilization could be guided to better the human experience.  Perhaps both were right in their own way.   We must cultivate our own garden, but to do so we need to look both to nature and that voice inside, a voice that may have its origin outside the material reality we can perceive.  God?   Spirit?   Does it really matter?

This entry was posted on November 17, 2013, 15:08 and is filed under Deism, Ethics, Philosophy, Political thought, Religion, Rush, Spirituality. You can follow any responses to this entry through RSS 2.0. You can leave a response, or trackback from your own site.