From Europe to Asia 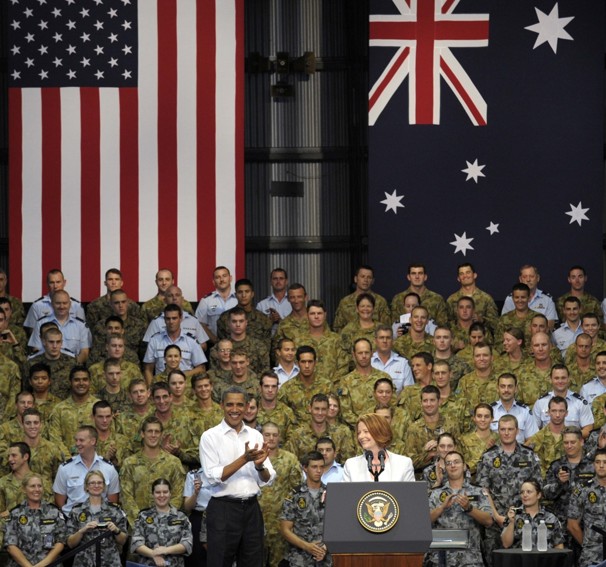 President Obama announced the expansion of US military ties with Australia

Franklin Delano Roosevelt had a problem.   As much as he wanted to get involved with the war that started in Europe in 1939, there was intense domestic opposition.    Many Americans, especially the “isolationist” Republicans had disdain for Europe.    European states were the world’s great powers, if we focused on them we’d have to play by their rules.   Asia, on the other hand represented an opportunity for the US to expand our influence and in fact counter European power.  Hitler may be a problem, but Tokyo stood most directly in the path of US interests, especially the American desire to develop a strategic partnership with China.

Of course it took a surprise attack from Japan to get the US into World War II, and for most of the war US efforts focused on the Asian theater, leaving it to Russia and Great Britain to try to beat back the Nazis.    When the war ended, the US occupied Japan and imposed a constitution designed to assure that Japan would not be a rival for dominance in the region.   President Truman and Secretary of State Acheson had to exaggerate the danger of Communism to get the Republicans to embrace NATO and the rebuilding of Europe.  Their eyes were still on Asia.

Then in 1949 Mao Zedong’s Communist revolution put an end to US hopes for regional hegemony.   With China “lost,” the region declined in importance, and US interests shifted back towards Europe where they’ve stayed for over sixty years.    To be sure, the US fought in both Korea and Vietnam, but those conflicts were not so much about Asia, they reflected global Cold War dynamics.  Our best troops, technology, and emphasis was on the NATO alliance – Europe and the US were “twin pillars” of the western alliance according to President Kennedy, a “community of common values” said West German Chancellor Adenauer. 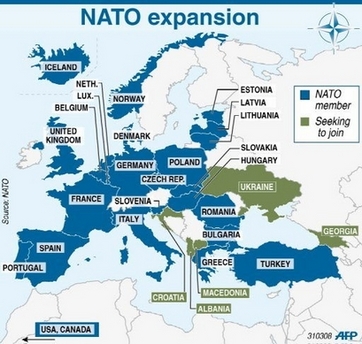 NATO became the most successful alliance in history

After the Cold War ended the US started to withdraw troops from Europe.   Russia was not seen as a serious security threat, especially not by the Europeans.   The US wanted to enjoy what President Bush (the Elder) called ‘the peace dividend,’ and Europeans felt they didn’t need the US to defend them.   NATO remained a successful alliance, but it’s necessity was in doubt.    Relations hit a low ebb in 2002-03 when a combination of American refusal to participate in international ventures important to the Europeans (ICC, Kyoto Protocols, etc.) and widespread European opposition to a US war in Iraq created mutual ill will.   Though they’ve patched things up again, it’s clear that relationship is not what it used to be.

With President Obama’s announcement in Australia of a growing US presence in the south Pacific, US policy has come full circle.  The future is no longer in Europe, but Asia.   Europe’s economic and financial mess rivals our own (the problems are, to be sure, different), while Asian countries represent the future, and perhaps a path towards economic stability. 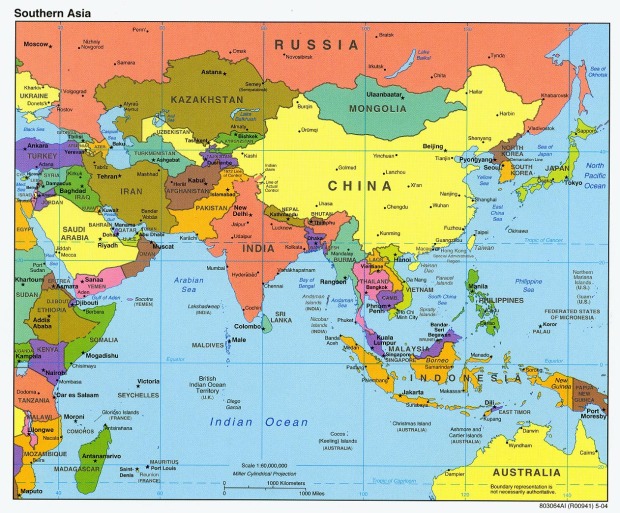 As a Europeanist (that’s my specialty in political science) one might think I’d oppose such a move, but I don’t.   Moreover, I think the EU will also shift it’s priorities from the US to Asia — Asia is the new center of economic power and perhaps the engine for the 21st Century.

From the standpoint of the United States and Australia the move makes sense in realist terms.    The shift of US interests from Europe to Asia, as well as the growing importance of India and China in the region suggests that its important the US care for its alliances in the region, particularly with Australia, Japan and South Korea.   A stable balance of power will prevent China from using its power to extend hegemony and work against US interests.

In neo-liberal theory, the case isn’t clear cut.   China’s reaction was one of annoyance: China’s economic relationship with Australia poses no threat to the country, but its alliance with the US creates a threat to China.    Australia should think about whether or not its worth it to anger a friend with whom it is engaged with a cordial, mutually beneficial relationship.

Chinese-Australian economic ties have been deepening, and benefit Australia

In that sense the US has far less to offer.   The US economy can’t help pick up Australia’s as ours remains mired in recession.   As the regional economic powerhouse, its in Australia’s interest to foster good relations with China — after all, who thinks China is going to invade Australia?

The strongest case against the agreement is based on an analysis of internal Chinese politics.   For years there has been a tug of war between China’s military and civilian leaderships.   The military thinks in realist terms, seeing the US as a potential threat to Chinese power and security.   After all, despite China’s wildly successful economy, they still lag far behind the US in military prowess.   The civilians don’t see war as likely, and recognize that conflict would mess up a very well developed strategy for economic growth and influence.    Up until now they’ve placated the military by allowing them to use a chunk of China’s economic growth to develop their capacity.   Yet the rift is real.   Will this tip the balance of power within China towards the military and yield a more confrontational China?

It shouldn’t.   As much as China protests (and the civilian leadership has to protest loudly or else face a more assertive military leadership), they know that this isn’t really a threat to China.    At best it’s a hedge against China exercising undue influence in regional disputes, it provides the US and its allies a slightly stronger voice in regional politics.   China may not like that, but they can live with it, as long economic and diplomatic efforts are made that take Chinese interests into account. 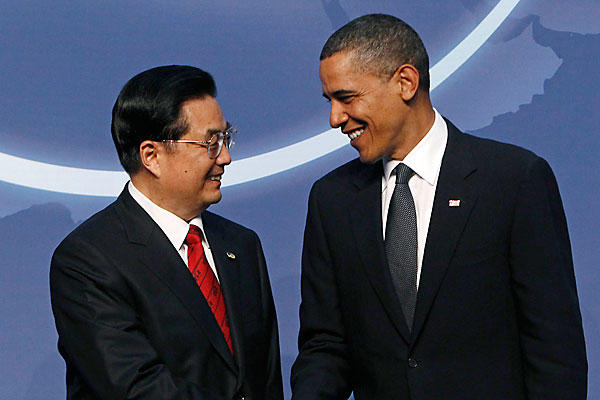 Ultimately the pro-Asia lobby before WWII may end up having been prophetic.   The US has a future in Asia, not as the dominant power but in partnership with China.   China’s problems of political transformation, corruption, environmental degradation and adapting to its position in a global economy are more easily solved by working with rather than against the US.   US economic ills are real and structural; China could damage our economy severely without a shot being fired.   Yet they don’t want that because they would be hurt by the resulting economic instability.   They would rather see the US restructure its economy.   They can help  a weakened yet still relevant US adapt to new international realities.

In that sense the shift of emphasis to Asia is part of a global dance.   China and the US are still rivals and the US is dealing with a relative loss of global power while China is on the rise.   There is concern amongst US allies about growing Chinese clout.  The US worries that without the capacity for quick intervention in the region China could fill the power vacuum.    Yet this rivalry can and should turn to partnership over time.   The world is still “realist” enough that the US presence in Australia is needed to remind China of the relevance of American military power.   But globalization is rendering military power ever less important, and over time the Chinese and Americans will see that their destinies are better linked in partnership than broken in conflict.

This entry was posted on November 20, 2011, 16:00 and is filed under Barack Obama, China, Foreign Policy, Globalization, World Affairs. You can follow any responses to this entry through RSS 2.0. You can leave a response, or trackback from your own site.