As we go into the 2012 election season I get the sense, as I wrote last month, that the political pendulum is starting a swing to the left.    The political discourse doesn’t sound the same, rage at the Democrats and Obama has faded, and disillusionment with the GOP Congress and its refusal to even close loopholes for the wealthy is growing.  Moreover even if the public doesn’t embrace Occupy Wall Street, they’ve shifted the conversation to one about relative wealth and the power the establishment elite.    That doesn’t necessarily help Obama, as he’s an establishment Democrat, but overall it’s not the kind of mood that’s good for the Republican party.

Pew research has released some polls that might give us a glimpse at the mood of the voters.   The first is the above poll showing “Tea Party” approval and disapproval.  Almost all through 2010 more people agreed with the Tea Party than disagreed, with an election day peak of 27% agreeing while 22% disagreed (most people, obviously, were non-committal).    Now 27% disagree while only 20% agree.   In tea party districts election day agreement was 33% to only 18% disagreeing.   Now it’s almost even, 25% agreeing, 23% disagreeing.   This loss of support by the Tea Party coincides with a loss of media exposure and the lack of any big rallies or media blitzes.   The Tea Party appears at the very least dormant.

Here’s another snippet from Pew: 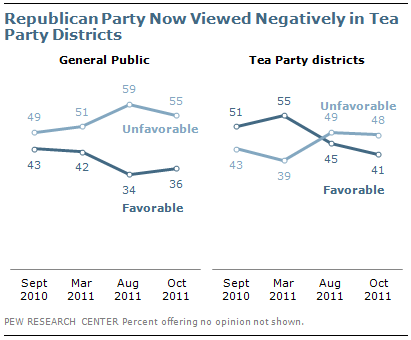 Around election time in 2010 the GOP was viewed negatively by 49% of the population, with 43% having a positive view. This may seem odd given the election results, but don’t forget that a lot of people see both parties in a negative light.  By last month the favorable rating for the GOP fell to 36%, while 55% had an unfavorable view.   Not a good trend for the Republicans heading into an election year.

In tea party districts the GOP was viewed favorably by 51% around election time and unfavorably by 43%.  By March 2011 that gap had grown to 55% favorable and 39% unfavorable.   Since then it has turned around.  In Tea Party districts the Republicans are now viewed favorably by only 41%, while 48% view them unfavorably.   Given that many of these districts have vulnerable first term members, this could be an ominous sign for the Republicans.   The good news in this for the GOP is that maybe they bottomed out in August — there was a slight uptick for October.

But what about the Democrats? 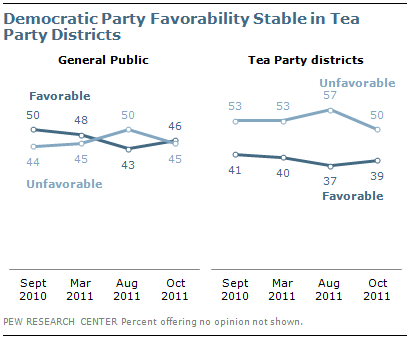 The Democrats don’t have rosey numbers either.  Last year before and even after the election they were viewed more favorably than they are now.  Still by 46% to 45% the general public views them more favorably.  In tea party districts the Democrats remain almost as unfavorable as ever, though their numbers are about the same as the Republicans.   Though the trend hasn’t been as pro-Democratic as it has been anti-Republican, the Democrats haven’t been hurt this last year as much as the GOP has been.

So what does all this mean?   First, there is a real chance that 2012 will turn out to be a much bigger Democratic year than most people now predict.   Not only is Obama still the odds on favorite (in part due to weakness in the GOP field), but the Republicans are almost certain to lose seats in the House despite Democratic retirements.   The possibility of the Democrats retaking the House cannot be ruled out.

But besides electoral politics, this is a sign that the Tea Party may have ran its course.  Not only is Occupy Wall Street grabbing the headlines and media attention, but anger at Republicans is muting past anger at Democrats.   Obama is hurt by a bad economy, but enough people still see it as something he’s inherited and believe the Republicans have stood in the way of compromises designed to pass measures to improve things.    People may not have warmed to the Democrats, but they’ve cooled to the Tea Party.

This suggests that the Republicans need to seriously think about compromise.   The message is clear: the American people don’t want hyper partisan ideological jihad.    Moreover when stories come out from Wisconsin that groups are collecting fake petitions on the Scott Walker recall ballot in order to try to fool voters into thinking they’ve signed — a felony offense (some are even going up and ripping them up) — it feeds into the stereotype of the Tea Party as mean spirited extremists.     The GOP has to turn this around if it wants a chance to hold on to the gains of 2010 and perhaps take the Presidency.

This creates opportunity for the Democrats.   Obama can run against Congress, and Democratic candidates can push Republicans on unpopular stances and their refusal to close loopholes on the wealthy.   However there is one thing President Obama and the Democrats need to harness if they’re to turn around their 2010 fortunes and garner a big victory: optimism.

On the campaign trail and in individual campaigns the Democratic theme has to be “a better tomorrow, starting today.”   Optimism needs to replace the hope of 2008.   The worst is behind us, we have a vision of renewal and innovation.   America isn’t done for, we’re not facing long term crisis or inevitable collapse.   We don’t all have to learn how to grow crops and prepare for calamity.   We’re neither going to war with China nor are we going to be overtaken by them.   The future is bright.

An optimistic message and a little economic good news, and the Democrats could end up looking at 2011 as a tough period that they survived.   Republicans might look back and think they peaked too soon.    All of this is speculative, it’s trying to intuit the pulse of the country, interpreting slight shifts in public mood.   Bad news, a scandal, a foreign policy disaster, economic crisis (or growth) all can push aside other factors in shaping 2012.

Still, one thing seems clear: the Tea Party is yesterday’s news.   Even in its own distracts it’s lost popularity and has run out of gas.  Its style and methods now turn people off more than they help.   The Republicans have to recognize this, and realize that the anger of the Tea Party may have helped in 2010, but it’s not an effective long term approach.   They have the House now, anger works against them.

And if it makes the Tea Party feel any better, the same kind of collapse happened to President Obama after his election.   Movements can arise, but are hard to sustain.   OWS should take notice and learn from this as well.