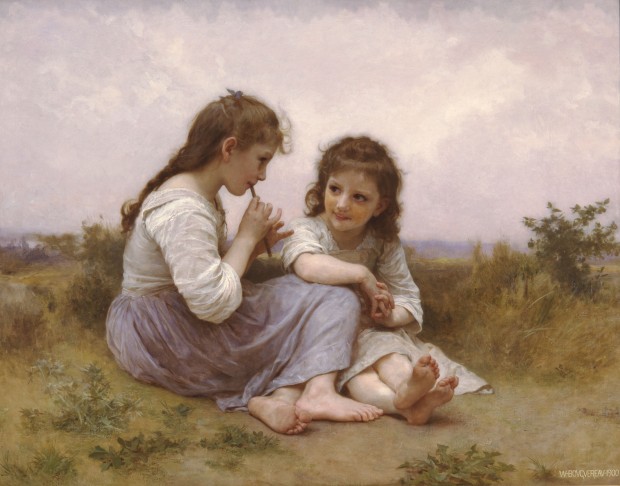 A Childhood Idyll, by William-Adolphe Bouguereau, 1900

(Note, this is part 7 of a series called “Quantum Life,” in which I post the contents of a strange ‘guide book’ I found for a game called “Quantum Life.”  It is in English, which the book calls a “Quantum Life language,” unable to capture all thecomplexities of the world as it really is.  I’m not sure where this book came from).  If this reads very strange to those following my blog, click the link above and look at the basic premise of this series and earlier entries.  Picking up where I left off, the next section is “Childhood”:

In a nutshell, the goal of childhood in the game Quantum Life is to create an identity in this round of play (lifetime) that reflects the player’s personality and experience, and engages the chosen environment (era, culture, etc.) effectively.   A successful childhood yields a player who, while not understanding he or she is in a game, recognizes that through choice he or she is fundamentally in control of the life experience.   Moreover a successful childhood yields a player who intuitively understands and can use the myriad of connections and shared experiences to learn and grow.

Childhood is the most pure experience of the game, with stronger connections to past experiences than any other time.    This makes it an exuberant part of life, or one in which great resiliency and surprising strength can be shown.  Nonetheless many players spend multiple “lives” simply trying to get through childhood successfully before attempting adulthood.   Others choose obstacles in particular lives (illness, injury, a different perspective on reality often seen as mental illness within the game) to work on particular challenges.    Relatively new players to the game often choose to leave at or near the end of childhood.    By age 17 almost all “psychic” connections are fully subconscious and operate invisibly.

As with any “life,” different experiences are chosen for diverse reasons.  Almost always the parent-child dynamic is important.   At the age of 3 or 4 the child first leaves the protection of  extremely close contact with and understanding of true reality.   Sometimes this corresponds to a point of trauma.    Many people want to experience a particular kind of lesson in life, and trauma at that point can be life shaping – it sets up a more rigid set of probabilities, conditions a player is less likely to veer away from.   Those who experience trauma of some sort at an early age will find that experience (losing a parent or sibling, having a life changing injury, etc.) a part of their entire life and identity.  Traumas throughout childhood play a similar role; their influence is strongest at age 3 or 4 when the child emerges from its deeper connection with true reality.

Even without major trauma, a key role of childhood is identity construction.  Since each game or “life” requires the player to don a new personality, childhood is when the ground work for doing this happens:

1.  Relation to others.   Early on children are completely dependent on others for material survival.   Between birth and age 5 the relationship to the parents determines the ease players will have in trusting and opening themselves to others.  Players have considerable control over this, as these ages are the easiest to plan with the game counselor.  For various reasons some players might want to overcome the challenge of having a lack of trust for others, or perhaps help their parents learn lessons about the consequences of their actions.

For example, two players between games may decide that one has a real problem with patience and empathy.   Another player may choose to enter the game as a child with a major handicap in order to try to force the problem player to work on those traits.

2.  Confidence.  Confidence in life is an important goal of the game, but it has to be learned.   Early in childhood this involves asserting ones’ will, defying authority, and even “temper tantrums.”   This can be countered by ideas of shame and outside control by parents or an existing culture.    Depending on goals and challenges to be faced, players may want to have low confidence as an obstacle to be overcome.   Other times poor choices by parents limit the confidence and increase the shame in a player.     Many players play multiple rounds (lives) primarily to practice developing or fostering confidence in the roles of parent or child.

3.  Action.   After age 11 players also learn how to take action in the world and achieve results.  Toys and games are particularly important, as are relationships with others.    Players model out actions and possibilities, preparing themselves for the choices adulthood will require.   This is integrated with the goal of confidence building:   low confidence action can inspire guilt, high confidence connects action with initiative.

4.  Understanding.   Throughout childhood players are acquiring knowledge about their new environment at a tremendous pace and learning how the world — the quantum life game reality — works.    Learning in the game is a communal endeavor, not something the player achieves completely on his or her own.    This understanding of the world takes place on many levels — causal understanding of how things happen in a “material” world, as well as determining what kinds of things have value for the players.

5.  Taking Control.   As players near adulthood the primary goal is to take control of ones’ life and take responsibility for the choices made and their consequences.    Players should be comfortable with the identity they have constructed for themselves at this point.    For many players, especially new ones, this is a daunting task which must be attempted multiple times before success.   Even seasoned players may fail, making adulthood very difficult.

The two goals of childhood seem straight forward: a) accept and be happy with the identity they have constructed, and b) to take control and accept responsibility for ones’ life choices and path.    Yet numerous obstacles stand in the way, despite the closer connections with reality.   This is a necessary consequence of  “forgetting” past rounds of the game.   Moreover, for all the difficulties and opportunities that “adult” players endure, childhood remains the most important and difficult (if also joyful) stages of the game.

Finally, the tasks listed above accumulate over rounds of play.   A player who has mastered the notion of control and identity acceptance will have an easier time doing so in future rounds.   These differences appear in the quantum life game as differences in personality or temperament.   Extremely advanced players often choose to experience childhood in difficult ways in order to help less advanced players who may be their parents or otherwise connected with their life.

This entry was posted on July 20, 2012, 13:06 and is filed under Fiction, Quantum Life, Spirituality. You can follow any responses to this entry through RSS 2.0. You can leave a response, or trackback from your own site.