Posted by Scott Erb in Minnesota Twins, Sports on May 4, 2015 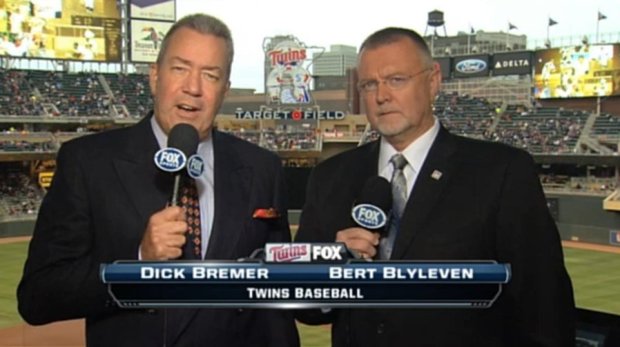 In 1970 at the age of ten I became a serious Twins fan.  I kept a scrapbook, including a story from the Minneapolis Tribune about a 19 year old rookie named Bert Blyleven who looked “too young to shave yet.”   By the time I was 13 I was keeping score and kept a notebook with info from all the games, including who hit homeruns, the pitcher of record, and if there was a save.  I’d listen to Herb Carneal call the game, glued to the radio.

My first live game was  a double header against the Oakland A’s in 1973.  That was the A’s heyday with Reggie Jackson, Sal Bando, Gene Tenace, Catfish Hunter, etc.  The A’s would win their second world series in a row that year, but the Twins had their number, winning 14 of the 18 games they played.  That included the two I saw, with the second being exciting.  After starter Jim Kaat was knocked out of the game early, a rookie named Bill Campbell came in and pitched brilliantly as the Twins caught up.  In the 10th Tony Olivia would double and George Mitterwald hit his second home run of the game to win 7-5! 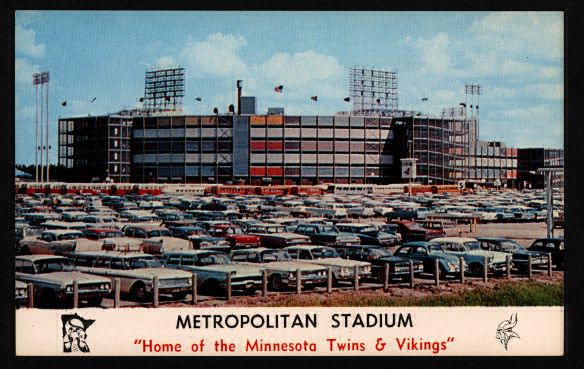 As a kid I thought the outside of the old Met stadium was absolutely beautiful!

In 1987 I was in grad school at the University of Minnesota, following the team as Gary Gaetti, Kirby Puckett, Dan Gladden, Frank Viola, Bert Blyleven, Tom Brunansky and Kent Hrbek led an unexpected drive to the Twins first world championship.  In 1986 they had been last in their division.   Nothing can replicate that experience for Twins fans – the first championship (unless you count when they were the Washington Senators in 1924), unexpected, with a core group that had come up through the farm system and endured some rough years.

Then four years later, in Berlin Germany to do research, I listened to every game of the 1991 series as Vin Scully and Johnny Bench called the play by play carried over Armed Forces radio.   In the wee hours of the morning as Jack Morris pitched ten scoreless innings and Gene Larkin hit a game winner I was jumping around the apartment I was in, thrilled!

This all ended in 1995.  I got a job in Maine, loaded a Ryder truck and took off.  I spent the summer in Europe, and as I threw myself into my new job and home, baseball seemed distant.  Moreover the 1994 strike and cancelled world series left a sour taste in my mouth.   Baseball seemed tarnished.   I was surrounded by Red Sox fans, and soon I lost track of the Twins.  Oh, the years they made the playoffs I would watch.   But I didn’t know the players or feel connected.  But now, 20 years later, I’m finally a Twins fan again.

This year I got Directv’s “extra innings” major league baseball package.  And so far I have managed to watch every one of the Twins first 25 games, albeit a few via DVR.  Dick Bremer and Bert Blyleven are the announcers – the same Blyleven who was a rookie when I first started following the Twins . 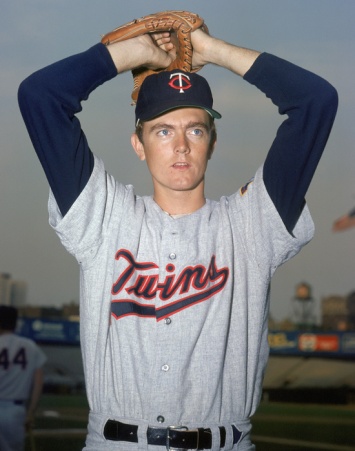 It didn’t take long to get to know the team. Watching daily after following them somewhat close in spring training I am learning about each player.  It’s my team again.   The only bummer is a black hole in my Twins memory.  I can recall Steve Braun, Bobby Darwin, Larry Hisle, Ray Corbin, Danny Ford and a host of others former players, some good some utterly forgettable.  But there are twenty years of names – some very important – that are meaningless to me.  Still, I’m even learning those, bit by bit.

The game has changed some.  They’re really strict on the check swing rule now, pitchers are yanked earlier, even when pitching well, and I can’t believe how the fielders are shifting some hitters.   I like how they show the speed of every pitch as well as keeping the pitch count (which I used to do myself).   Still, it’s like coming home, reuniting with an old friend after 20 years, and realizing that you feel as close and connected as ever. 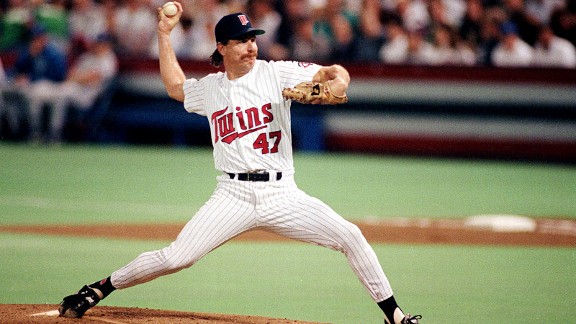 Jack Morris’ ten inning shutout of the Braves in game 7 of the 1991 World Series remains one of the most celebrated individual baseball performances.

My nine year old son is watching with me quite often.  I explain the game to him and he’s a quick study.  He impressed me after a runner was held at second by a ground out to short.  “Dad,” he said, ” you know, if you have a guy on second you should hit it on the other side, then he’d be able to get to third.”   So cool that my son, on his own, re-discovered one of the fundamentals of baseball.   “Yes,” I said, “that’s right – they say you should hit behind the runner.”  He thought about that and smiled, “I get it!”

It’s not just about baseball, or the Twins, it’s about my youth.  How often did I hear on the radio, “The Minnesota Twins are on the air!”  Followed by the jingle, “We’re going to win Twins, we’re going to score…”  Following Rod Carew’s quest to hit .400, every year thinking “this will be the year!”  Even now when short stop Danny Santana makes eight errors early in the season I think, “wow, he’s fielding like Danny Thompson back in the 70s.”

Seeing the fans in the stands at Target Field – a place I have not yet visited, but will with two sons on July 8th – has me remembering many games at the Dome and the old Met.  Back in grad school I’d often on rainy days get a $3 outfield bleacher ticket just to watch the game.

One of the more surreal experiences I had was at the Metrodome. It was 1986 and the Twins led the Angels. Ron Davis, their “ace reliever” (who that year blew almost all his save opportunities) was pitching and a storm outside caused the roof to tear and the dome to start to collapse.  People went running for the exits, one lady screamed and pushed me aside as she dragged her kids down – I stayed on the second deck to watch.    Soon the dome re-inflated, and then the Angels defeated the Twins.  I miss the dome, but am glad they’re playing outdoors again!

Sunday after my son and I batted and played catch for about an hour we went in.  We were watching the Twins together when they loaded the bases.  I had told Dana about what a grand slam is, but he never saw one.   “Maybe you’ll see your first,” I said.  We then watched together as Trevor Plouffe launched a home run to left to give the Twins the lead.   Dana jumped up and down with excitement and I realized that he’s where I was all those years ago, starting to become a fan.  I’m glad I’m back and who knows – maybe this will be the year!