Yes to the Trans-Pacific Partnership 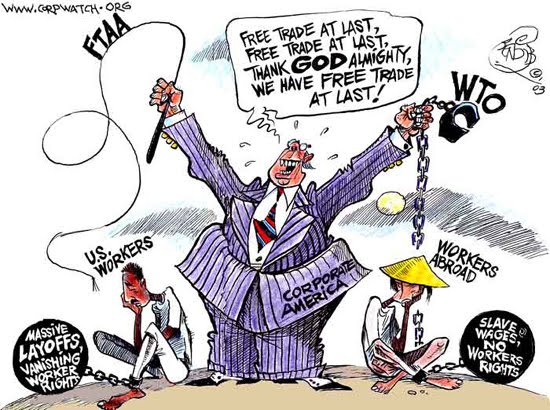 In 2005 Brunei, Chile, New Zealand and Singapore formed the  Trans-Pacific Strategic Economic Partnership Agreement with the idea of integrating the economies of countries on both sides of the Pacific.  The US joined in 2011, and now negotiations are underway to expand the zone to include Australia, Canada, Japan, Malaysia, Mexico, Peru and Vietnam (as well as the original four and the US).  Other countries, such as Taiwan, the Philippines, Laos, Cambodia, Indonesia, Bangladesh, India, Columbia, Thailand and China have expressed interest in joining.

Many on the left oppose expanding this agreement, arguing that it would harm the US economy by exposing us to competition from third world countries that pay their workers less and have laxer environmental regulations.  The argument is that this further empowers global corporations to evade democratic oversight and prosper at a cost to American workers.

Maine Congressman Mike Michaud also urged President Obama to bring up alleged currency manipulation by Japan in negotiations with Japan’s Prime Minister Shinzo Abe.   Japan’s currency has been deflating despite economic growth, and it appears that this is intentional.  Yet given the near 25 year stagnation of the Japanese economy, I’m not sure turning this into an economic conflict does anyone any good.

Michaud’s argument is sound, but it’s not clear his recommended course of action is best

Joseph Stiglitz, one of the top economists on the planet, has warned that this agreement benefits the very wealthy, and will contribute to the increasing concentration of wealth in the world.   By trying to push this through on a “fast track” trade agreement (meaning a bill written by the White House could be sent to Congress with no possibility of amendments or alterations), President Obama is likely to anger the left wing of his party.   Indeed, anything sent to Congress will likely be after the 2014 elections so as not to arouse controversy during the mid term campaigns.

So is Obama becoming a tool for big money, showing that once in power Democrats like Republicans serve the rich and powerful, or is the trade agreement good for the economy and US national interest?

Alas, the answer is not easy, nor can it be reached with the usual ideological arguments.  Yes, this is good for big corporations, and in my opinion we are in dire need of a global regulatory scheme to put big money under some form of accountability other than “the market.”   Markets aren’t magic, and in fact can be easily manipulated by the very powerful.   Yes, this could create difficulties for workers facing new competition.

Yet globalization is real.  The greater the connections between countries, the better the world economy will become.  The production possibilities frontier will expand, third world states will use first world markets to grow their own markets, and global economic growth will pull us out of the current recession/crisis.   The risks of not expanding global markets in a time where we face high debt and stagnant growth are greater than the threat to American workers.

Despite the faults, expanding global trade and cooperation is necessary

The way to insure a “fair” globalization is not to try to stop cooperation between states, but to use NGOs and social media to expose ways in which the system is rigged and create a movement for change.   That won’t come easily because the system is still stuck in the mode of the old sovereign state schema.   The system is obsolete, in a state of transition, and change won’t come fast enough for idealists who see the problems.   The answer isn’t to try to stop change, but to work to guide it.

So I favor the TPP – Trans Pacific Partnership.  I favor expanding trade and global cooperation.   Yet that is not enough; we must also build stronger international institutions to protect workers and the environment, and expand democratic accountability.  To be sure, I’m keeping my mind open and will listen to alternative arguments.  This is not an easy issue.