Trump Had No Choice 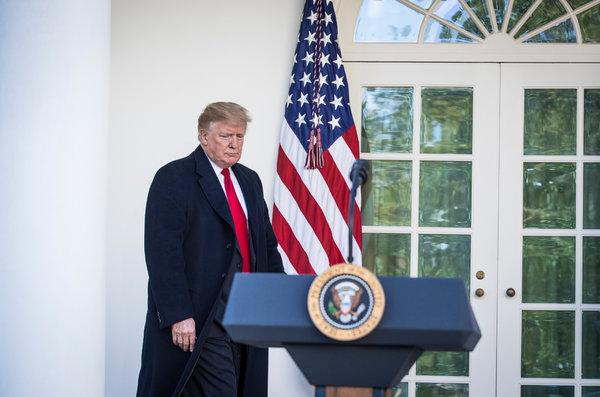 Make no mistake:  Donald Trump’s decision to end the shutdown was an ignominious defeat for the man who likes to “win.”  But while conservatives fret that Trump “caved,” he really had no choice.   He had chosen a flawed strategy based on an underestimation of his opposition, and without appreciation for how much Americans would not like a shutdown.

In December it appeared the President agreed to a short term bill to keep government open in order to allow time to negotiate on border security.   An avalanche of protest from right wing pundits convinced Trump to shift strategy and embrace the shutdown.  In an infamous meeting with Nancy Pelosi and Chuck Schumer he boasted that he would “own the shutdown” and “would not blame” the Democrats.   That clip got played many times on the media as the shutdown went on.

By all accounts, those supporting the move in the Administration felt this could be an “easy, quick win,” which would show the Democrats that they can’t just obstruct.   Nancy Pelosi had to fight off an internal revolt to become Speaker, and many centrist and conservative Democrats had expressed support for at least part of the wall.  Moreover the price of $5 billion wouldn’t be a budget buster – and the shutdown would cost more.  Surely the Democrats wouldn’t go to the mattresses over this!   Indeed, many moderate Democrats questioned Pelosi’s hard line approach – but she held her caucus together.

When the shutdown started, President Trump’s job approval in the “Realclearpolitics” poll of polls was at negative 8.5%.  Last week it hit negative 15%.   All polls showed the public blaming the President, and it didn’t help that his cabinet and staff became adept at making statements that made them seem out of touch with how federal workers were suffering without pay.

At 78 years old, few in Washington have the political experience and strategic brilliance as the Speaker.

With Trump’s poll numbers dropping, fears that the shutdown might harm economic growth, and the public growing impatient, Pelosi had no incentive to make a deal.   Anything the President did to try to turn around the negativity associated with him and the shutdown failed.   His compromise proposal was too meager to be taken seriously, and failed to turn public opinion around.

The first law of holes is that if you are in one, stop digging.   Unfortunately for the President, the belief that the Democrats would somehow fold kept him digging longer than he should have.   One of the biggest mistakes people make in politics, warfare and sports is to think an opponent to be weak or lacking resolve.    Conservatives in the White House convinced themselves that the Democrats could not weather a long shut down.  They were wrong.

What Pelosi has done is put the President on notice: he’s dealing with divided government and nothing gets through that doesn’t get the approval of the Democratic majority in the House.   If he wants something, he has to bargain as an equal partner, he can’t just demand.   Trump is used to have GOP majorities in each chamber, he is getting a quick lesson in how divided government works.

Where does this go next?   My bet will be that the Democrats will offer the President a face saving compromise that he can claim as “the best possible” given Democratic control of the House.  He will say he chose not to call a national emergency in order to give the Democrats a chance to prove they are concerned about border security.    Pelosi will recognize that the politics have changed, and she needs to deal.

Of course, it’s possible the far right will convince the President to undertake another sure fire losing strategy: declare a national emergency.   Not only would that create a constitutional crisis sure to be tied up in the courts, but it faces bipartisan opposition.  The public would recognize it as a gambit to try to circumvent normal rule of law.  I suspect, however, that the President realizes that these kinds of fights aren’t in his interest.  He needs to do what he says he’s good at: make a deal.

This entry was posted on January 26, 2019, 12:31 and is filed under Uncategorized. You can follow any responses to this entry through RSS 2.0. You can leave a response, or trackback from your own site.