Obama, the Republicans and Immigration

Obama addresses the nation on November 20, 2014

The politics behind President Obama’s executive order on immigration are fascinating, so I’ll quickly dispense with the policy stuff.  Yes, what he did is legal.  It probably should have been earlier, and it comes after he tried to work with Congress for six years to get a legislative solution.  No, this doesn’t go as far as comprehensive immigration reform – we’ll still need Congress to do that (and I suspect they will – but only in 2017) – but it definitely gives the US a more humane, compassionate and reasonable approach to immigration.

And the politics, well…as Spock would say, fascinating.

One theory is Obama is purposefully “trolling the Republican party.”  Not so much by the policy – Obama was going to do this anyway – but by not waiting until a bill was passed in December to continue government spending.   The logic goes like this:  the Republicans do not benefit politically when they try to shut down the government.   Most Republicans do not want a government shut down.   Already 2016 looks difficult for them, wounding themselves politically is something they want to avoid.

Moreover, the GOP remains divided.  They want to create the impression they are united and can be responsible, but the divisions are intense.   If those divisions can be brought into the open and be shown to bring chaos into Republican ranks, then the Democrats not only have a better shot to perhaps win back both houses in 2016, but Obama will benefit politically, giving him more leeway.  Already talk radio hosts, tea party activists and many in the House and Senate are calling for a government shut down. 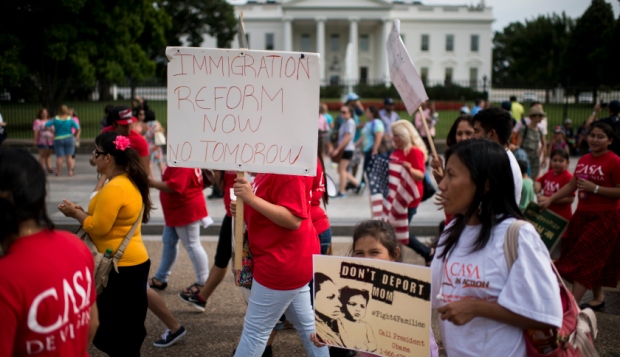 This would, however, be a major shift of tone from a President who has been criticized for being too nice with Republicans, too unwilling to take unilateral action.  He is by nature a consensus builder and he has tried to use pressure and persuasion with Republican leaders who make ultimatums and refuse to compromise.   It’s not that they don’t want to compromise, but they don’t have their House caucus under control.  To make significant compromises would be to face a rebellion, and Speaker Boehner would prefer to lead a “do-nothing” Congress with at least the illusion of party unity than one gets things done, but further divides and weakens the GOP.

So the White House may believe: a) there is nothing to gain by trying to work with this Congress – it’ll be no different than the last one; b) it’s now or never, we have two years to continue our agenda; and c) if we act now and inspire anger in the GOP base, then the  party will be divided, play with the fire of a government shut down, and ultimately be weakened going into 2016.

On top of that, Latinos will be thankful, will see and get angry at the rhetoric coming from the right, and turn out in record numbers to vote in Democrats in 2016.   The Republicans will claim the Democrats are “bribing Hispanics,” but that will be even more insulting.  The result: a weakened GOP and a revived Democratic party, already recovering from the 2014 election and realizing that overall the direction of the country still favors the Democrats.

To be sure, Obama wouldn’t have done this if he thought it was bad policy.  This could be another aspect of his legacy that one day shines brightly, despite the controversy now.  It could also make it easier for the GOP to actually decide to pass a bi-partisan immigration policy that has more of what they want, realizing they get nothing if they just complain.  If the Republicans did that, they might find it easier to win over Latino voters in the future.

To Boehner and McConnell, they have to somehow satisfy their right wing (Boehner calling Obama ‘the most lawless President in history’ shows at least he’ll use their rhetoric) but chart a path that shows the country that the Republicans aren’t a bunch of angry whackos who can’t be trusted with the steering wheel.  This is a real test of whether or not the GOP can actually use their new majority effectively.

Clearly Obama is still very relevant and willing to use his power.   Senator McConnell said the President is ignoring the will of the voters (the relatively small number of voters who voted in the midterm), but the Majority Leader should be reminded that Obama won elections with significant majorities twice.   That means he has been entrusted to follow his best judgment.

It’s also interesting how fickle politics can be.  Just over two weeks ago Republicans were overjoyed and Democrats demoralized by the 2014 Midterm elections.   Between the defeat of the Keystone pipeline, the China-US climate deal and now bold leadership from the President on immigration, it’s the Republicans feeling angry and upset, and liberals light on their feet.   But that could change just as quickly.

This entry was posted on November 20, 2014, 22:56 and is filed under 2014 Election, 2016 Election, Barack Obama, Democrats, Government shutdown, Immigration, John Boehner, Republicans. You can follow any responses to this entry through RSS 2.0. You can leave a response, or trackback from your own site.