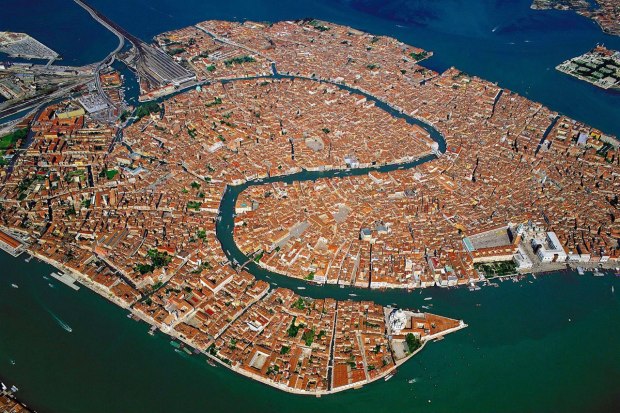 The last western Roman Emperor was deposed in 476.  The Italian peninsula was in ruin – barbarian tribes were attacking what was left of the old imperial glory, and soon the knowledge and order of Rome gave way to the dark ages, as politics throughout Europe became exceedingly local, with custom and tradition defining social life.  With the church embracing Augustine’s other-worldly theology (this world has no value, it can only tempt you – eschew the things of the world and focus on preparing for the afterlife), progress stopped.

Venice was different.  As Rome fell, a group seeking safety decided that the sand dunes around what is now Venice could make it a defensible city, and keep out the barbarians.  They took wood and piled it up in the lagoon, literally creating islands!  Wood does not decay as quickly under water, and wood from that era was much stronger than today.  Without so much carbon in the atmosphere the rings of trees are tighter – that wooden foundation still holds Venice up today.

Fitting that the last western Roman Emperor was Romulus Augustus – Romulus was the name of Rome’s mythical founder, Augustus was the man who began imperial rule.

Early on they fished and focused simply on creating a sustainable life style.   They recognized the authority of the Byzantine Empire to the East.  Rome had split into East and West, as Emperor Constantine created the city of Constantinople to rule the East.    For a time it kept the Roman heritage alive, and could provide Venice protection.   For the ensuing centuries Venice couldn’t really be called Italian – they focused on the East and stayed out of Italian political life.

Politically, the Venetians created one of the most successful Republics in history.   In 697 they elected their first Doge, who would be the symbolic leader.  The Venetian Republic would last 1100 years, and be dynamic for most of that time.   It’s decline would start in the 1400s but even in decline Venice would remain stable and prosperous.

Their political system was complex.  Up until 1297 nobility was something that came with wealth – if you were a successful merchant, you could be in the Venetian ruling class.  The system had what we would call checks and balances to guard against any group getting too much power.  The Doge was “first among equals” and had very limited power.

The rise of Venice as a true power started with the first crusade of 1095.   Although we tend to see the crusades in primarily religious terms, and certainly religion was the rationale provided, it was also political.  Europeans had been fighting the Vikings and other groups for centuries.  By the eleventh century things had stabilized and they needed something for their warrior class to do – expansion to the east was natural.  Venice would transport troops and material for the crusade, and bring back goods to sell.   Quickly they became exceedingly wealthy and their influence grew.

The Serrata of 1297 altered the Republic by preventing anyone new from joining the Venetian Great Council.  Nobility was now by birth, ending the centuries of having a ruling class that was chosen by a kind of entrepreneurial meritocracy.  However, the nobility knew that they could not lose the loyalty of the rest of the merchant class, so they created the cittadini originari which gave those who might begrudge the new nobility certain rights and powers.  Various workers had their own status, as well as political roles.  It worked.

What Venice managed to do was to create a system with virtually no political dissent.   They did this by institutionalizing decision making in a manner that kept everyone with the same goal: protect and enhance Venetian prosperity.  Differences of opinion were worked out peacefully, almost invisibly. 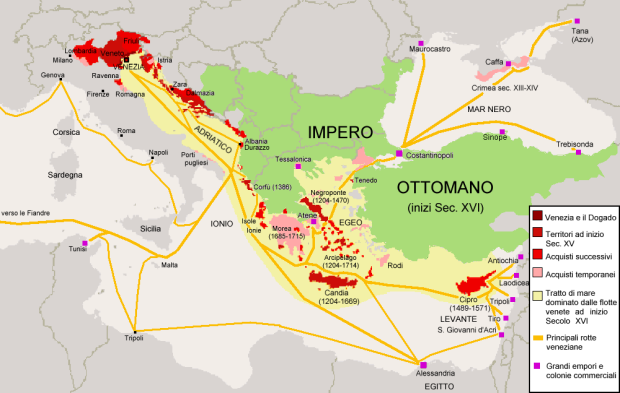 The dark red was original Venice, lighter red is territory they acquired. Pink they held temporarily. Yellow routes, and light yellow shade is where Venice dominated trade in 1500

This gave them the capacity to defeat Genoa in 1381, becoming for awhile the dominant force in European international trade.  Venice was at the height of its power, but faced a new problem.   The Byzantine empire, which was a buffer from the power of the Islamic world, was in rapid decline.   The Ottoman Empire emerged as a real threat.  At that point Venice truly became Italian, and in the 1400s built the Terrafirma empire which stretched almost to Milan.

Alas, this led to rivalry with other Italian powers, and in 1509 Venice was defeated at Agnadello.  If not for the Pope, who wanted Venice to remain a buffer preventing the expansion of the Ottoman Empire to Italy, the city might have been taken and the Republic would have ended.  As it was, it would last almost 300 more years.

Venetian power was in decline, however.   Their defeat at Agnadello combined with the expansion of the Ottomans to eat away at Venice’s trade dominance.   When Portugal managed to get around the cape of Africa, states on the Atlantic coast rose in trade power.  It’s a credit to the Venetian Republican system that it could endure all that without creating bitter rivalries.  Other cities like Genoa and Florence were weakened by internal power structures, Venice was not. 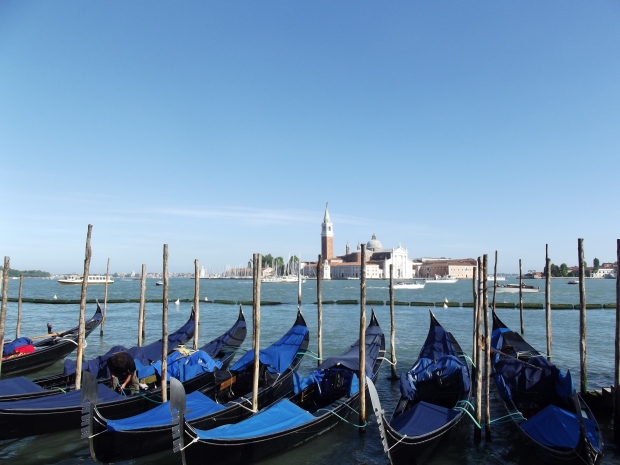 In some ways, Venetian history is more impressive than that of the Roman Empire.  They remained a republic (albeit an oligarchic one), and except for the relatively small terrafirma, focused on making profit rather than expanding territory.  Imperial Rome was constantly riveted by civil war and power struggles – Venice had a kind of unity of purpose that is rare.

As a political scientist I ponder what they got right, and if there are lessons we can learn.   More on that soon; those who may join us on the May term trip to Italy, think of the rich, wonderful history we’ll encounter.  Venice is so much more than beautiful canals and narrow alleys.

This entry was posted on September 18, 2014, 21:47 and is filed under History, Italy, Travel. You can follow any responses to this entry through RSS 2.0. You can leave a response, or trackback from your own site.