When I was 22 I left the US for the first time, traveling to Bologna, Italy to study a year at Johns Hopkins SAIS (School of Advanced International Studies – now called the Nitze school) Bologna Center, working for my MA in International Studies.   I left on August 23, 1982, exactly 32 years ago.

Bettino Craxi was Prime Minister, considered at that time one of the most successful as his government had staying power.  Later he’d be part of the Mani Pulite scandal that would destroy the Italian first Republic and die in exile in Tunisia, but that was a decade away.  Bologna was considered a “red” city, governed by the PCI, the Italian Communist Party.  It had a vibrant student life, thanks to being the home of the oldest university in the world – the University of Bologna, founded in 1060.  It was radical, wild, and quite the place for a young man who had spent almost all his life in South Dakota, about as far from radical big city life as humanly possible!

I went into a bar and they had murals of American indians, teepees, and stuff about the Lakota Sioux.  I told them I was from South Dakota, where the Sioux lived.  Turned out it was a Communist bar and we got into a discussion about communism, capitalism and politics.  I was the typical American but already had the capacity to listen to other perspectives – it was fun.

That year transformed me.   My mind opened to Italian and European culture (I also spent a lot of time visiting pen pals in Germany, developing a taste for Hefe-Weizen while learning some Bavarian), and became fascinated with European history and culture.

I bought, read, and looked up words for about 30 of the comic books (lengthy ones) telling stories of the one village in Gaul which did not yield to Julius Caeser, thanks to our heros and a magical drink cooked up by their Druid

Alas, the classes at SAIS were all in English and I spent most of my language time studying German.  I went to visit friends in Eichstaett every month or so, and really wanted to communicate.  I bought German translations of the Asterix and Obelisk comics, and wrote down every word I didn’t know.  Then I would look them up, and study that list – the list grew to over 3000 words.  I built a vocabulary slowly but surely. Now with kids and a job, I don’t have as much time to put that kind of effort in it, but I know what it takes to learn a language – it isn’t fast or easy.

Luckily, while I didn’t really learn Italian during my year there, I did go out a lot and picked the language up well enough to chat at parties or on the street.  I’ve forgotten much of that, but my ear still can distinguish words and patterns in Italian, so I don’t need something fancy like Rosetta stone to learn it.  A work book, a vocabulary list, and grammar exercises will be key.

I’ve been saying I’m going to learn Italian for over thirty years.  When I returned from my year in Bologna I was determined to keep studying Italian.  But between finishing my masters, working for the Senate, night managing a pizza place, and then ultimately earning my Ph.D., other things got in the way.   In 1991-2 I lived in Germany, and really developed my fluency in Germany.  I avoided Americans and made some of the best friends in my life while there.  I learned the joy it is to communicate in a foreign language, and really start to understand a different culture. 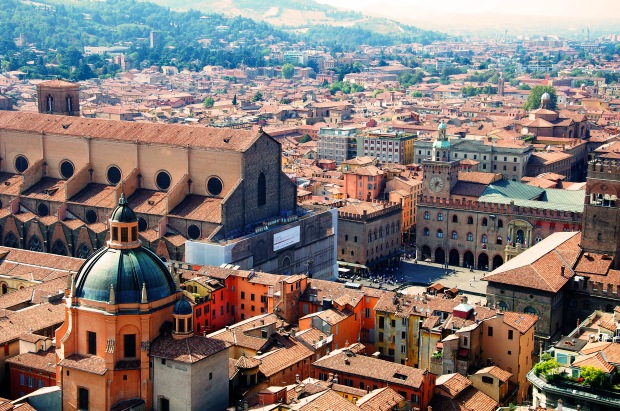 Bologna’s Centro Storico – historic city center. I spent hours exploring the streets and allys, visiting shops and observing everything I could

I’ve been back to Europe many times.   I’ve crossed the Atlantic over 40 times (meaning over 20 round trips — not sure the exact number).   11 of them have been leading travel courses, four times to Germany and seven times to Italy.   Otherwise most of my trips were to Germany to visit friends and engage in research.  Next May we plan on another travel course to Italy.  This time, I want to go there able to speak Italian.  Not fluently – you have to live there for that – but enough to engage in conversation and understand what is said.

So I got out my book today and started with the basics.   Definite articles, indefinite articles, plurals, partitives, etc.  I know enough that I don’t have to go back to the very basics, just review basic grammar, relearn conjugations, and most importantly build vocabulary.

A defining feature of Bologna is the Portici – porticos so ubiquitous in the city that you can walk all through the Centro Storico on a rainy day but never get wet!

I’m also lucky that my friend Steve is going to do work in Venice, Italy in the near future and thus he’s really throwing himself into learning Italian.   So I have someone to practice with, if I keep myself disciplined.   It sort of makes me feel young – focusing on learning this language, wanting to be able to use it.   The 22 year old in me comes back out.

In those days it was a different world.  Bologna had no fast food except one Italian burger place near the train station (now it’s dotted with McDonalds), to make a call home I had to go to the phone company in the middle of the night and wait to be given a booth to place the call.  No internet, just lots of letters and post cards.  Credit cards weren’t accepted anywhere in Italy, there were no ATMs, and the currency was the Lira — 1900 Lire per dollar, that year.

So glad the Boboli gardens were free when I was there – it was a perfect place to read, study, people watch and eat gelato — a short train ride from Bologna

Italian TV had only three or four public channels, and almost everything you bought was at a small store or market.  There were a couple Coop supermarkets, but the quality was less and it was a long drive.  I bought my pasta from a lady who ran a small shop with a big photo of Mussolini behind the counter.   The local Tabacchi sold stamps – the price seemed to always vary – and I would spend hours just walking around the city, exploring and observing.  I was hooked – this South Dakota boy was going to study international relations!

I realize that the Italy I experienced back in Bologna is as far away as the Italy of 1950 was from my time there.   That boggles my mind.  I would go to Florence to read and people watch, spending lots of time at the Boboli gardens, which were free to enter.  Now it’s 12 Euros.  A train ticket to Venice or Florence as about $5 round trip second class.  Now it’s about $50 – but instead of two and a half hours the trip is about an hour.  The trains then had compartments and on warm days you could open the windows.  Now it’s climate control with “airplane” seating.

So as I celebrate the 32nd anniversary of my first flight abroad (first commercial flight ever, actually), I also feel very lucky to have experienced how Europe has changed over the years.   And that 22 year old Scott still is a part of me, driving me to finally learn Italian for real this time!   Anyone have any Asterix and Obelix books in Italiano?

This entry was posted on August 23, 2014, 00:20 and is filed under Uncategorized. You can follow any responses to this entry through RSS 2.0. You can leave a response, or trackback from your own site.