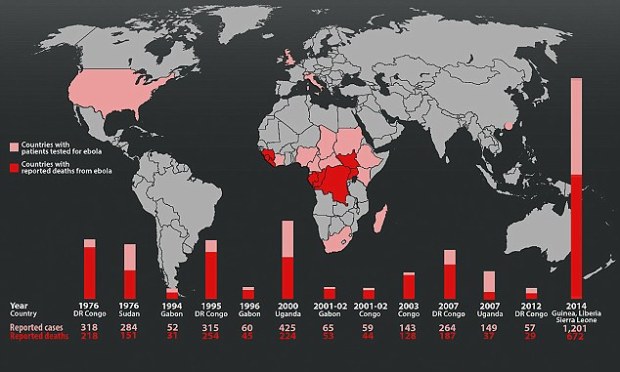 Most of us treat the story about the Ebola outbreak in Africa as a curiosity.   This isn’t the first story about Ebola somewhere in Africa, but it always seems to get contained.   However, the current Ebola outbreak has become more widespread than any time in the past; if it spreads in Nigeria, especially to the capital of Lagos where a case has been reported, it risks becoming the a world wide epidemic.

It started, like small past outbreaks have, in what seemed to be an isolated village, Guéckédou, Guinea.  In December 2013 a two year old died of suspected Ebola, as did a few others.  After that things seemed quiet until February of this year when the disease started spreading through Guinea.  In March Doctors Without Borders warned that this was a dangerous epidemic and would be difficult to contain.

But Ebola in an African country is not unprecedented, so most people shrugged off the news.  Then in May it spread to Sierra Leone, and later to Liberia.

Dr. Sheik Umar Khan, one of Africa’s most famous doctors, succumbed to Ebola in Sierra Leone, despite having followed all the protocols

A few facts:  Ebola is spread through exchange of bodily fluids, which can include sweat and thus touch can transmit the disease.  It kills over half of its victims, and this strain seems to have a death rate of near 70%.   Once infected, there is no cure.  There are treatments, but those usually involve basic patient care to increase the chances of survival.   There is no vaccine, nor are there any potential vaccines or cures anywhere near any kind of human testing.   Since the disease has been very limited in scope, drug companies haven’t had the profit motive to invest large amounts in preparing for a potential outbreak.

If it spreads, we’re in trouble.

There has been a case in Lagos, Nigeria, a city of over 20 million people.   Not only is Lagos immense, but it is full of slums and dirty living conditions.  If it spreads there, it could rage out of control.   Lagos is also home to major transnational oil companies who operate in Nigeria.   Ebola in a city won’t stay in the slums.   There is a lot of international travel from Lagos, and it’s likely that an outbreak in Lagos would become global.

At this point, the response has been slow.   Seen as an African disease, the West hasn’t taken it seriously, nor has it given African states affected the aid they need.  Governments in the West haven’t funded research into cures or vaccines because it wasn’t seen as a major problem.

But it’s not too late.  At this point, the virus is not out of control, even if this outbreak is larger and more dangerous than any time in the past.  For once Ebola is in a position to become a global pandemic, and even if the chances are still relatively small, the time to act is now.  Not only to prevent this outbreak from spiraling out of control, but to prepare for the future.  This will happen again, and again, and each time the risk of a pandemic will grow.  This needs to be a global priority. 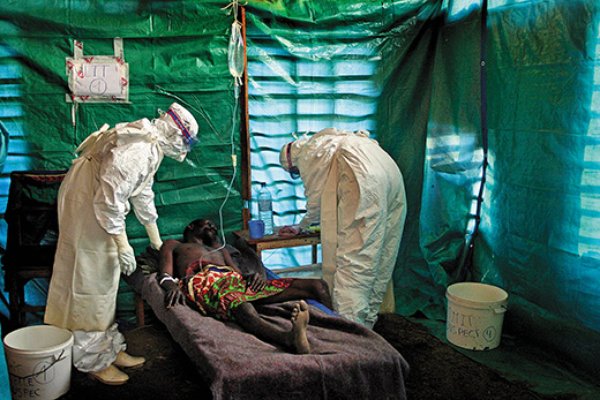 There is nothing about Ebola that makes it an African disease; if it spreads to the West it will be hard to stop

The governments of the West need to give as much aid as possible to assist the effort on the ground in Liberia, Sierra Leone, Guinea and Nigeria.   The focus now can’t be primarily on potential cures or vaccines — there’s not enough time for that — but to treat, quarantine, and contain the virus where it is.

That means sending people and supplies – basic medical equipment, including gloves, sanitizing agents, sheets and material used to disinfect and create sanitary conditions.  Good quarantine facilities will make it easier to contain the virus.  People on the ground can make it easier to identify cases and get help to where it’s needed.

Yes, it’s dangerous.   More health care workers have died in this outbreak than any other Ebola outbreak before – not only in absolute terms, but as a percentage of the health care workers.  That is scary – and one can understand people in the West not wanting to go into a situation where even the top doctors have not been immune from infection.  But we send troops into battle, and health care workers have proven themselves as brave as soldiers.   They often have helping others as their main goal.

Still, if we want to send enough people to make a difference, they need to be well equipped and everything possible done to protect health care workers.   This is real.  The time to act is now – this is a real and present danger, and the warning signs are clear.   Otherwise we risk that 2015 will be remembered as the year of the Ebola plague.