Crimea’s location on the Black Sea has been of historical strategic importance to Russia.

The reaction to Russia’s invasion of Crimea has been swift and harsh.   The EU and the US have unambiguously condemned the military action, and have talked of serious sanctions and consequences should Moscow not back down.   However, as time passes and it becomes clear that there is no easy way to get Russia to back down, it may be necessary to seriously consider dividing Ukraine.

Its almost surreal how there is a kind of collective amnesia about the 2008 war in which Russia attacked the independent state of Georgia, a close US ally and participant in the Iraq war, taking the Russian-speaking territories of Abkhazia and South Ossetia.   Those are still occupied by Russia almost six years late.   The events on the ground, outside the control of the US, created a situation where Russian action was virtually inevitable no matter who was in office.   Blaming Obama (or Bush in 2008) is ridiculous.

Second, this war represents the weakness of the Russian position.   While critics want to paint Putin as Hitler incarnate, planning to swoop next into Poland, the reality is that he is struggling to keep Russian influence in places where Russia has been dominant for quite some time.    When the USSR gave Crimea to Ukraine in 1954, there was no doubt where the power really lie – in Moscow.   Kiev, like Tbilisi, was subservient to the Kremlin.   That they can’t keep a fraction of their influence without using the military shows a country still in decline, not one resurgent. 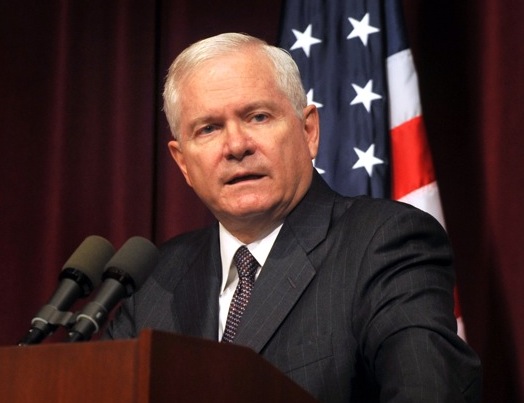 Gates, a Republican told his party to tone down it’s criticism of the President and “try to be supportive of the president rather than natter at the president.”

Third, Republican attacks on the President are counter productive,  shallow and objectively wrong.   The response to Russia’s invasion of the Crimean peninsula has been vitriolic among a few on the right.   Senator McCain said the US had a “feckless foreign policy” and Senator Graham claimed that Obama is “weak and indecisive” and “invited aggression.”

Driven by talk radio, Fox News, and the right wing blogosphere, the right has convinced themselves that Obama is a bumbling idiot with no experience, who does everything wrong, and maybe should be impeached.  That hyperbolic inbred Obama-phobia plays well among that group, but is both absurd and harmful to the country.   We need to have a serious domestic discussion about our options, interests and goals in dealing with far away crises like this one.  Consider:

1.  What options does the US have?  In reality, we’re not going to go to war over Crimea.   Neither are the Europeans.  Russia has troops on the ground and it’s in their backyard – their “near abroad.”  This means that the only feasible response involves economic, symbolic and diplomatic action.   This cannot be unilateral.  Such actions are only effective if they are multilateral and enforced.  That means the US has to work with the EU for a common position.

The 1854-55 Crimean War is remembered as a military disaster, even if it did yield the Red Cross and “the charge of the light brigade”

2.  Is it wrong to consider having the Ukraine give up territory?   Besides Georgia, Yugoslavia is another state where ethnic differences caused parts of that country to want independence from the core.   The international community opposed separatists in Yugoslavia for a long time, but ultimately realized that the country was untenable as one state.   Might it be untenable to have a Ukraine so divided between East and West – or Europe and Russia – that internal conflicts are unable to be settled?  Might it not be better to have a clearly western Ukraine whose people support NATO and EU, and a new state representing parts of the east that want to be closer to Russia?   Do we support existing lines on maps, or self-determination?

3.  If Russia is in decline with Putin acting desperately, shouldn’t we also consider not just “piling on” like the international community is now doing, but giving Putin a way out?  The Russians have a tradition of isolation from the West, and if Putin sees no choice he’ll play into that cultural history to keep a firm grip on power and assert regional Russian power.   Russians often have seen “being Russian” as a spiritual identity that is exceptional and must not be sacrificed for western norms.

The problem with not giving Russia a way to save face or gain something is that more regional conflicts could emerge, spreading instability.   Moreover, if Russia is isolated, any effort by the Russian people to try to open up their society would be endangered.  If isolated, domestic oppression would grow.   The hope of having economic interdependence ultimately open Russia’s politics would be dashed.   Finally, sanctions and enmity between Moscow and the West would have economic costs; it’s ultimately in nobody’s interest.

US Secretary of State Kerry and the EU’s equivalent to a foreign minister, Catherine Ashton.

Americans have to accept that the world doesn’t run by idealistic legalism, and geopolitical events overseas often reflect the local realities that can’t be countered with simple slogans.

I believe negotiations should start aimed at allowing Russian speaking regions of the Ukraine vote on autonomy or remaining with Ukraine.  Right now this is not a popular position – the international community is piling on Russia, and domestic political name calling makes it hard to deal with the ambiguities and nuances of this case.   But I doubt that a divided Ukraine is sustainable.  Given globalization, there is no real benefit to controlling a bigger chunk of territory – whatever the nationalists in Kiev might say.  That kind of thinking is obsolete. 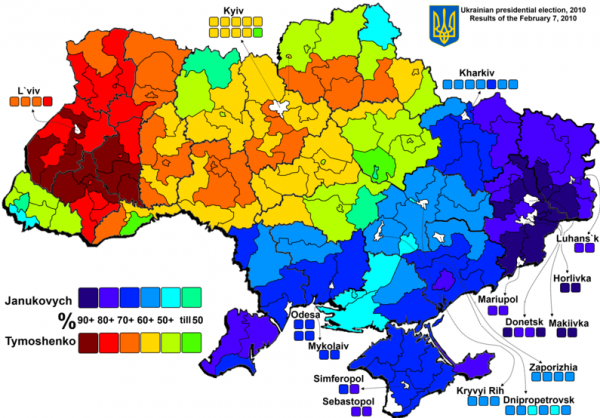 This map, shown in the post yesterday, shows the stark division. The places with blue or dark blue could well choose to leave Ukraine.

This entry was posted on March 5, 2014, 13:49 and is filed under Barack Obama, European Union, Foreign Policy, International Relations, John Kerry, Ukraine, World Affairs. You can follow any responses to this entry through RSS 2.0. You can leave a response, or trackback from your own site.