Why Obama Must Not Negotiate 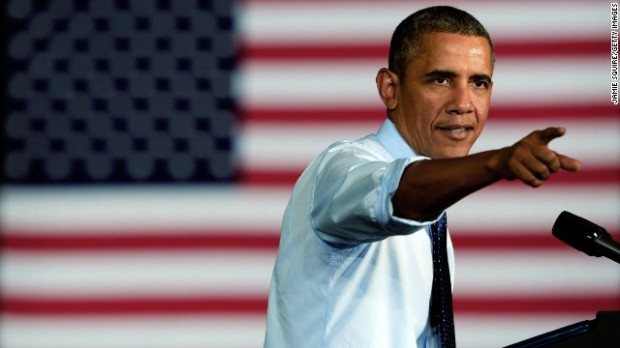 House Republicans are miffed that the President refuses to negotiate with them about the government shut down.   “He’s willing to talk with Iran, why not us,” Senate Minority Leader Mitch McConnell bemoaned.   Yet the truth of the matter is that there is nothing to negotiate.  For the good of the political process, for the sake of future Presidents Republican and Democratic, and for the country, the President must remain resolute.

The Republicans are trying to gut or delay the Affordable Care Act, and using a threat to shut down the government as a means of doing so.  That is, a group of people do not like a law that was passed a few years ago, and are threatening the entire country’s economy and well being in order to try to stop that law.   That’s not how you do it.

In a Democratic Republic, if you don’t like a law you make the case to the public.   You get your people elected, and then you change or rescind the law.   You do it through a constitutional process whereby the House and Senate vote, confer, and then pass a bill.  The President can sign or veto it.  Congress can override the veto if they have the votes.

In this case, the 2012 election had Obamacare as a main component of the campaign.   Candidate Romney vowed to rescind or at least dramatically alter the act if elected, the President vowed to maintain it.   The votes were counted and the President won by a large margin.  The Democrats gained seats in the Senate.   And though Republicans took the majority in the House, more votes for the House went to Democrats than Republicans.

If it becomes possible for a minority to get their way and undercut laws simply by threatening to shut down the government, a horrible precedent will be set.   Rather than letting the democratic process operate, dangerous and destructive games of chicken will become common place.   Today it may be the GOP and the Affordable Care Act, but sometime in the future the Democrats might threaten to do the same to stop changes in Social Security.

It’s even worse than that.   If the Speaker of the House allowed a free vote on conscience, the government shutdown would be averted.  A number of Republicans disagree with the extremist approach being taken.  But they are being silenced by a large minority, which has not only stymied the legislative process, but put the world economy at risk.

Whatever one’s view on Obamacare, there should be agreement that blackmail and threats to the very fabric of our country are not the way to oppose it.   A case in point: on October 1, the first day that exchanges were up to sell insurance for Obamacare, lots of glitches and problems arose.  The GOP could use that in their favor to argue against Obamacare.  Instead those stories were under the radar as everyone focused on the shutdown.

I’m not saying the glitches are truly a reason to oppose Obamacare, only that the GOP should be focusing on substance to make their case before the 2014 election rather than playing Russian roulette with the economy and the jobs of nearly a million federal workers.

Today is a gorgeous day in Maine, and one of the most beautiful parks in the US, Acadia National Park, is closed thanks to the fact Congress can’t do its job.   When a young child wants to watch TV and a parent says no, often the child throws a tantrum.   If the parent gives in, then the child learns that tantrums work, and will more frequently and more vigor go ballistic to get his way.  If the parent holds firm and there are negative consequences for the tantrum, the child soon learns that tantrums don’t work and it’s better to follow the rules.

The tea party wing of the GOP is throwing a collective tantrum.  To give in would assure that shutdowns, crises and other threats to our stability become more frequent – the tactic will have worked.   The President cannot let that happen.

This entry was posted on October 2, 2013, 09:08 and is filed under 2012 Election, 2014 Election, Barack Obama, Budget, Democrats, Health Care, Mitt Romney, Republicans, Tea Party, US Politics. You can follow any responses to this entry through RSS 2.0. You can leave a response, or trackback from your own site.