One of my projects this year is a series of lectures as part of the “World in Your Library” series sponsored by the Maine Humanities Council.  Saturday I traveled to beautiful Southwest Harbor, Maine, a delightful community on Mt. Desert Island.   The island, home to Acadia National Park and the tourist destination Bar Harbor, is stunningly gorgeous and I never knew what a gem Southwest Harbor was.   In the next two months I have talks in Bangor and two in Kennebunk.

The topic of today’s talk was “Children and War.”   The topic is important to me thanks to a course I co-teach with Dr. Mellisa Clawson, a professor of Early Childhood Education.   She and I started teaching that course in 2004, and over the years thinking about how war affects children world wide has changed my view on how we in political science think about conflict.   “Children and War” is a subject that elicits emotion and pain.   One woman said after the talk that her stomach hurt, and she had a hard time taking in the information, even though she was glad she came.   She gave me a hug and thanked me.  After the talk the Q and A ran almost an hour, perhaps the most flattering response one can receive!

I ended the talk with the video above – “Vagina” by Emmanual Jal.  Jal is a former child soldier from the Sudan, whose musical ability and creativity helped him escape and recover from the trauma of being a child soldier witness to and participant in atrocities and horrors.  The video is crude in some ways – “stop treating Mama Africa like a vagina, she’s not your whore, not any more….”  One woman, a feminist, was at first put off by what she saw as the derogatory use of the term “vagina.”  But others pointed out that the video was saying the beauty of Africa – and the vagina – was being misplaced by violence and rape; in this case, rape of Africa’s natural resources, leaving the people poor and subject to horrific violence.

Massive oil wealth is produced in the Niger Delta, where people live in abject poverty

And Jal is, sadly, correct.  Our lust for diamonds, oil and gold have lead us in the industrialized West to be complicit in horrific crimes in Africa.  We provide the demand for demands, gold and of course oil, and big corporations in collusion with African governments (read: organized criminal gangs aka mafia) provide it.  The people who live and work there are left poor, and wars to try to control the resources leave thousands dead and provide the fodder for the recruitment and use of child soldiers.

There are many organizations now that try to “rescue” and rehabilitate former child soldiers — children who have perpetrated atrocities that here would yield the death penalty.   Former child soldiers recall how they would feel proud of the terror they’d instill going into a community and killing indiscriminately.   Sometimes their leaders would scratch their skin open and rub cocaine into their blood to create a sense of power.   They’d tell them they were invincible; the LRA in Uganda would have the children rub palm oil over their body, saying it would protect them, if they believed the Lord was true.  If comrades died, they lacked belief. 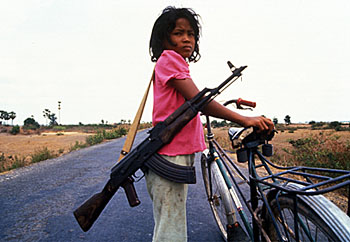 As many as 40% of child soldiers are female; rape is a constant

Up to 40% of child soldiers were girls, all of whom were raped and used as sex slaves, home keepers, and soldiers.  If they have children from the rapes, those children would be raised to fight.  They often avoid rehabilitation in order to avoid the stigma of having been part of the militias – the stigma of having been raped and used, making them “undesirable” by men in that culture.

But as Jal’s video shows, we are complicit.  Our big corporations work with their corrupt governments to cheaply mine diamonds, gold, oil and other minerals.  We don’t know or care of the social impact.  We pretend it’s just “the market,” and that any problems in Africa are endemic to those countries.   We are blameless.

Yet we are not – we make those atrocities possible, and our forefathers through colonialism and greed destroyed the old functioning culture on the African continent to bring them “civilization” – Christianity, government and science.   Thus they went from being self-sustaining and balanced to impoverished, unstable and dependent.   Crudely, we (in the West overall) raped the continent saying “it’s good for them and they like it.”  Yeah, Jal’s metaphor is discomforting, but accurate.

One problem is cheap weapons; yet when efforts are made to control their flow, the US opposes as the NRA considers it “gun control.”

To solve these problems it’s not enough just to try to help former child soldiers.  We need to work to build communities with a sense of purpose and identity.  Military intervention can’t work without a lot of effort to help rebuild social structures, providing education, basic necessities, and stability to allow community building.  But those efforts work against the desire of big corporations of the West – joined now by groups from China also wanting cheap resources – to maximize profit, while keeping Africans poor and divided.

If the people of Africa are kept down, treated as worthless as powerful states and corporations use “the market” to rationalize the plunder their wealth, the people may strike back.   In an era of terrorism, new media and easy to obtain WMD, that anger could be given substance.   The anger implicit in this video could magnify.  It’s in our interests to work together now, rather than close our eyes and simply enjoy the lifestyle we receive by tolerating the violence and abuse by corporations and governments worried more about the bottom line than humanity.