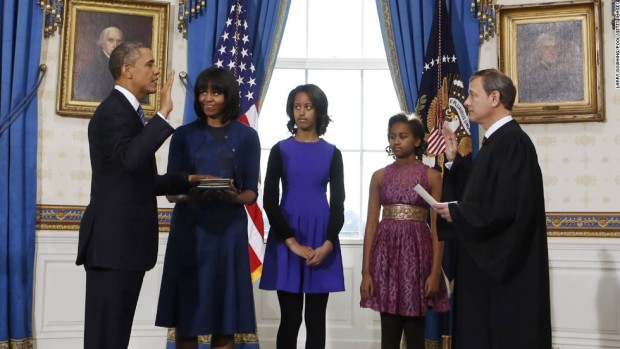 Obama is sworn in during a private ceremony on January 20, 2013

I have long felt that President Obama is destined to be remembered as one of the great Presidents in US history.   He came into office during a crisis, he is governing in a period of intense national and global transformation, and has true challenges to overcome.

In his second inaugural address President Obama made it very clear he’s not just looking to defend accomplishments of the past or stop Republicans from undermining social security or medicare.  Instead he made the case for moving forward, and tackling problems such as climate change, advancing causes like gay rights, and working to undo the slow deterioration of the middle class as wealth gets every more concentrated at the top.

Obama’s speech — and his re-election — might ultimately be remembered as the time when the US shifted from the path of deficits, tax reduction and distrust in government towards a new progressivism, rooted not in ideology but American values. 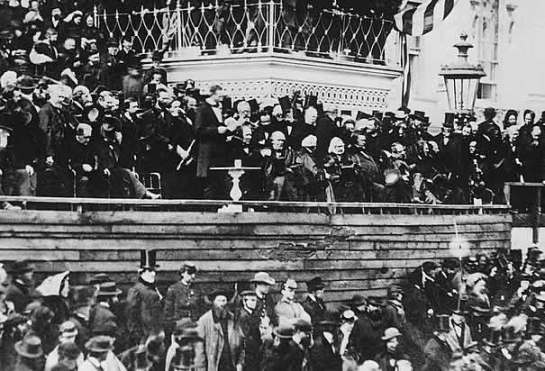 “For we, the people, understand that our country cannot succeed when a shrinking few do very well and a growing many barely make it. We believe that America’s prosperity must rest upon the broad shoulders of a rising middle class. We know that America thrives when every person can find independence and pride in their work; when the wages of honest labor liberate families from the brink of hardship. We are true to our creed when a little girl born into the bleakest poverty knows that she has the same chance to succeed as anybody else, because she is an American, she is free, and she is equal, not just in the eyes of God but also in our own.”

This is a clear indication that over the next four years the President isn’t just going to cut spending and/or raise taxes, but challenge Congress to rethink the core of our economic policies.   The path we’ve been on has lead to the most severe crisis since the Great Depression, and has left the middle class battered and bruised.  We must rethink economic conventional wisdom for an era of globalization.   Another:

“We will respond to the threat of climate change, knowing that the failure to do so would betray our children and future generations. Some may still deny the overwhelming judgment of science, but none can avoid the devastating impact of raging fires, and crippling drought, and more powerful storms. The path towards sustainable energy sources will be long and sometimes difficult. But America cannot resist this transition; we must lead it. We cannot cede to other nations the technology that will power new jobs and new industries – we must claim its promise. That is how we will maintain our economic vitality and our national treasure – our forests and waterways; our croplands and snowcapped peaks. That is how we will preserve our planet, commanded to our care by God. That’s what will lend meaning to the creed our fathers once declared.”

People have been bemoaning the lack of attention given by the President to an issue many consider the most important of our time – preserving the planet for coming generations by preparing for already evident climate change.  There is no reasonable way to deny human caused climate change.  There is a self-contained alternative narrative that tries to posit everything from scientists as being frauds to get government funds or cherry picked data, but even one time skeptics are admitting that the evidence is overwhelming.   Moreover, not acting will cause us to fall further behind the development of future technology.  Another:

Our journey is not complete until our gay brothers and sisters are treated like anyone else under the law – for if we are truly created equal, then surely the love we commit to one another must be equal as well.

The President’s words, coming after a reminder of the message of Martin Luther King 50 years ago, makes gay rights just as important a civil rights issue as any.   Just as you don’t deny marriage, housing, service or care to people on the basis of color, the days are ending when bigotry against gays was tolerated because people thought there was “something wrong” with them.

We cannot mistake absolutism for principle, or substitute spectacle for politics, or treat name-calling as reasoned debate. We must act, knowing that our work will be imperfect. We must act, knowing that today’s victories will be only partial, and that it will be up to those who stand here in four years, and forty years, and four hundred years hence to advance the timeless spirit once conferred to us in a spare Philadelphia hall.

A recognition that movement forward will often be slow, and in small steps.   That even if we set goals, we cannot get there unless we are pragmatic, and recognize that change builds over time.   Some activists see pragmatism or compromise as surrender, a violation of principle.  The President is telling those activists that’s not how our nation works.   We move slowly, and we always have.  Partial victories beget more partial victories, and with issues such as gay marriage change grows until it becomes inexorable.

President Obama has the chance to grab the mantel of greatness in his second term.   His vision is there, his leadership has been proven effective, and the country is in the midst of transformation.    I wish for him the wisdom to make the right call in ambiguous situations, to use the Presidency as a bully pulpit to continue to talk about American values, and to forge a path forward into the 21st century!