Great news, the unemployment rate is down to 7.8%, finally below the 8.0% barrier.  Not only were 114,000 jobs added last month, but revisions to the two previous months suggest the job market is stronger than had been thought.   Most people look at this as a good bit of positive news for the President, boosting his argument that we’ve turned the economy around even though there is more to do.

But wait, Republicans say, this isn’t as good as it seems.   We’ll dismiss the conspiracy theorists who say the numbers are cooked (just like the polls are skewed *eyes rolling*), and look instead at legitimate reasons not to see this as being as good as it appears.

Clearly this recovery has been slower than past recoveries.   But this doesn’t mean Obama has failed.   Back in 2009 I labeled what we’re going through the equivalent of “Great Depression II” and predicted it would take a long time for the global economy to restructure and recover.     The economy is now global, and no industrialized state has burst out like we did from past recessions.

Simply, this is not a typical recession caused by over production and the business cycle.   Rather, this is a structural crisis caused by a massive increase in debt (both public and private) and a severe financial crisis.   Moreover, due to high debt the traditional tool to get out of a recession — stimulate the economy — is no longer as useful.   Currencies are also under stress due to large increases in money supply, creating a risk of inflation.   This is more like the Great Depression, a structural adjustment to the global economy which probably will take the better part of a decade – or more.

This crisis could also be compared to other examples of a financial crisis induced recession – in those terms we’re still early in the process!

To be sure, Obama and his economists predicted that they could get out of the recession more quickly, and it’s fair to criticize him for not understanding the depth of the crisis.    Still, the prospects that any President can fix this even in the next four years are dim.

2.   Unemployment numbers are skewed due to increased part time work, a decline in work force participation and under counting the unemployed.   Here are a few charts to consider: 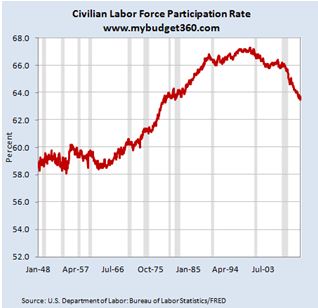 Labor force participation rates are down from a high of 67% at the height of the last boom to 63.6% this month (it’s been under 64% all year).      This means that a lot of people have left the work force.  There are probably more single income households now, as well as people going back to earn degrees.     Fewer people in the work force does lower the unemployment rate.   Also: 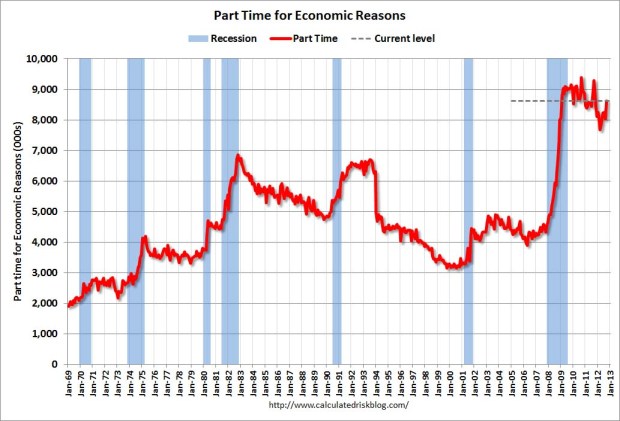 All recessions show people moving to part time work due to the recession.  This recession saw the steepest increase in absolute terms, but  those numbers rarely go down until well after the recession ends.    Higher levels of part time employment may be a fact of the new economy for some time.   Consider as well longer term unemployment: 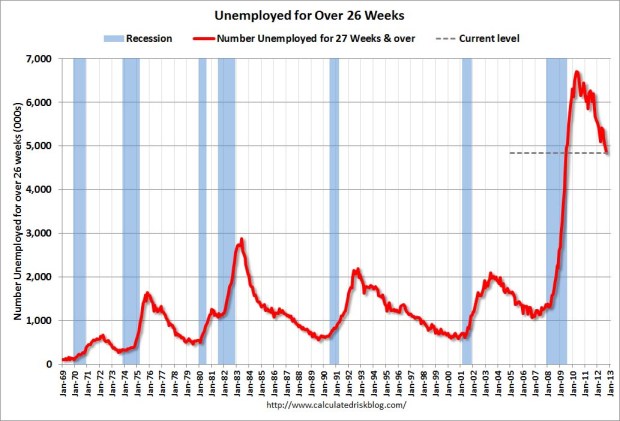 This is usually a lagging indicator of a recovery, but the numbers have already been declining – though the growth was steep during the recession.   The decline could be seen as a good sign.  Finally, there is the issue of the “real” unemployment number: 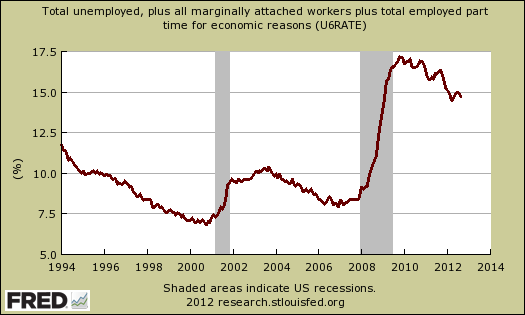 So what to make from these four issuess – part time workers, lower labor participation rates, long term unemployment and the real unemployment rate?   None of these statistics point to a robust recovery.   That is in line with my conclusion in point one – we’re in a global economic crisis from which there will be no quick and easy escape.

Yet the decline in the unemployment rate and 31 months of increasing job numbers are good things.   This recovery is probably as good as we can hope for given the structural imbalances in the global economy.    And, while Governor Romney is right in saying this isn’t like past recoveries, there is no reason to distrust or dismiss the steady if slow improvements in the US economy.

This entry was posted on October 6, 2012, 18:01 and is filed under 2012 Election, Barack Obama, Economy, Mitt Romney, US Politics. You can follow any responses to this entry through RSS 2.0. You can leave a response, or trackback from your own site.