The Duomo and Baptistery in Firenze

Having just discovered some cool websites involving Italy including Margieinitaly, lovebeautyexperience,  and traveling foodie, I’m very engaged with planning of the trip.   I’m the “trip planner,” the one who makes arrangements and takes care of the finances (in exchange my colleagues take over a lot of excess work during the trip itself).

Venice has been described as a “thinking person’s Disneyland,” but it’s beauty is real

The trip is difficult to plan because of the numbers.   We routinely have 40 students and four faculty, flying into Venice and out of Rome.    Venice is not a major hub so to get inexpensive tickets for that many people requires booking early.

My colleagues:  Steve Pane (Music History), Sarah Maline (Art History) and Luann Yetter (Literature) are the other three faculty, and together we’ve created a tight, integrated interdisciplinary course that yields an academic experience unlike any I’ve encountered.   Not only are we “on the scene” when we talk about art, history, the Catholic Church, or Florence, but over the years we’ve amazed ourselves by how much we learn from each other.    We find connections between disciplines and perspectives, and develop those in conversations with students.  The trip is always an educational experience for us as well as for the students.  There’s always more to learn!

Luann Yetter near Santa Maria Nouvella, talking about Dante at the end of the “Dante walking tour.”

1.  Numbers and Recruitment.    While it may seem like we’d be more comfortable with fewer than forty students, the economics of such a course requires at least nine students for each faculty member at a minimum.   We’re now gathering e-mail addresses of perspective participants, communicating with students who might be interested, and Monday held an early meeting (with a slide show!)   Because the course has a reputation, we usually have a good number who really want to go — but getting to forty can be daunting.

2.  Hotels.   Hotels are a challenge with over 40 people.   Luckily we’ve made connections over the years.  We know of a good hotel in Venice, Agli Artisti, near the train station.   Our favorites are the FLorentine hotels Abacho and Giappone, just blocks from the Duomo.   The Florence hotels feature five flights of stairs and no elevator, but the people there are awesome – we’ve stayed there every time.   Rome varies.   We usually stay near the Termini train station because it’s convenient, but they don’t like booking large groups.   We often have to break the group up.   My strategy now is to inquire about smaller groups in a number of hotels located close to each other.

Here I am with students in a Florence park, a seminar about the themes of the course so far (students were divided in groups, faculty rotated)

3.   Money.   Every trip has had a balanced budget.   As “keeper of the finances” my task is to determine a travel fee (cost of airfare, hotels, internal travel, public transportation, airport service, and many museums and events) and keep it as inexpensive as possible.   We do pretty good.   We get group rate train tickets (much cheaper than the Italian rail passes we got our first time); with hotels we balance price and quality.   By quality I mean safety and cleanliness, we eschew luxuries!   Students bring their own money for meals and others (though hotels usually have breakfast).

The hard part – determining the price in September without knowing what the value of the Euro will be in May.   Sometimes, it makes things really tight.    Even pricing in a higher value things can shoot up, that happened a couple of times and it was a struggle to stay in budget.   Once, though, the Euro dropped pretty dramatically and we were able to have some group meals and extra day trips. 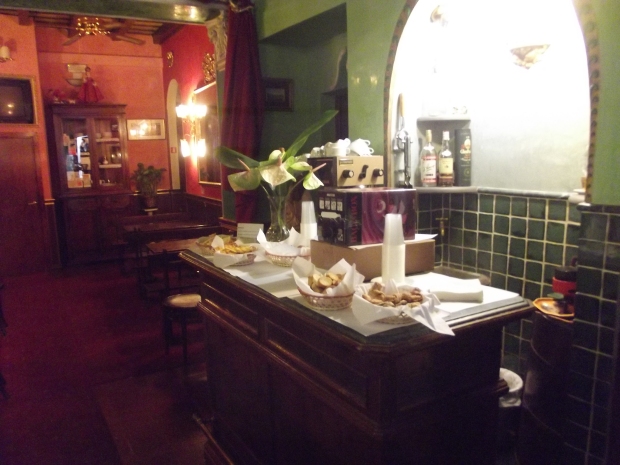 Not the best quality photo, but our friends at Hotel Abacha (via dei Banchi) in Florence surprised us with some bread and wine one evening

4.  Logistics.   Who is coming?   How many need a bus to the airport?   Can we pick people up at the Kennebunk rest area?   How early should we get to the airport?    Too early and people get bored, but we don’t want to risk a flat tire or traffic jam threatening our flight!   One thing I learned is that when you’re traveling with a big group, airlines treat you right.   They don’t want to rebook 40 people.

Once we flew Portland-New York-Rome.   Due to a weather delay we arrived in New York at the very time our Rome flight was to depart.  I was convinced we’d have to spend the night near JFK.   Nope – Delta had a bus next to plane just to get our group to our flight.  They had held it for us, gave us boarding passes as we entered, and the best part is that our luggage arrived on time too!   Another time in London British Airways switched to a bigger plane to rebook us to Vienna (on a Germany-Austria trip) after we missed our flight due to volcanic ash.

Theme of the Course:  Travel well, live well.   Traveling well means to accept that problems will emerge.   Museums will be closed, trains will be late, we’ll get lost, we’ll miss out on something, and our feet will get blisters.

Some people get very annoyed when things don’t go as planned, they get mad at airlines, the trains, and people who seem to be mucking up their day.   Stress builds.   These people are not traveling well.   The key is to let it go, go with the flow.   No matter how bad it seems, you’ll have a story and things will work out.    Once a student forgot his passport at the hostel and had to miss the train from Florence to Rome.   We gave him instructions to catch the next one, but due to a change of platforms about three hours into his trip he noticed the Alps.   Ooops, not Rome.   But he made it.

Another student had a passport stolen, others have gotten ill, and we get lost and off schedule quite a bit!   Don’t let such things get the better of you, look at it all as an experience — enjoy and travel well!   My experience is that if you can travel well, those traits carry over into every day life.   Problems get solved, life goes on, and you collect experiences!

This entry was posted on September 24, 2012, 21:01 and is filed under Education, History, Italy, Travel. You can follow any responses to this entry through RSS 2.0. You can leave a response, or trackback from your own site.