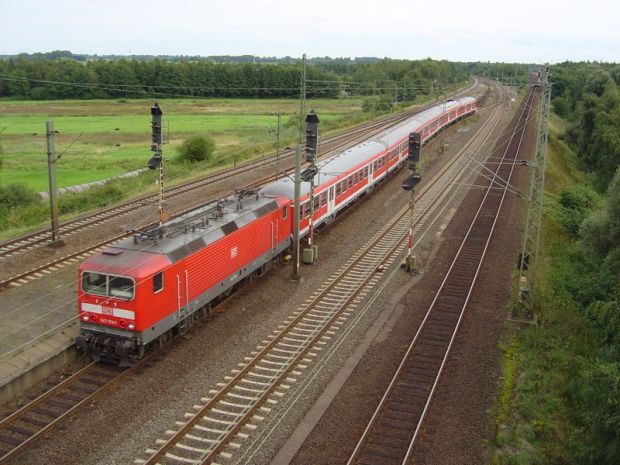 It was January 25, 1992 and I had just spent a few days with students from St. Olaf College, helping out on a “global semester” course run by Professor Rod Grubb.   I was living in Bonn, working on my dissertation, and had been hired by Professor Grubb to come help out as he led 15 students around the world, with a January stop in Berlin.   The students were great as we explored old East Berlin, not yet rebuilt or remodeled — a Berlin that is now gone.

I had to take the train back to Bonn, buying the German newsweekly Der Spiegel and finding a compartment that was empty.   Nowadays European trains tend to have open seating, much like airplanes.  In those days they were generally divided in compartments of six seats, three people facing three others.

Those compartments yielded some of the most memorable conversations of my life.  I recall once spending a night in deep conversation with four others on an overnight train from Bologna to Munich.    I chatted with a girl from Austria who got pulled from the train by the police when we crossed over into Germany.   Seems she had a striking resemblance to a female terrorist – she said she got pulled aside almost every time she crossed from Austria to Germany.   I developed a crush on her, got her address, but never saw or heard from her again. 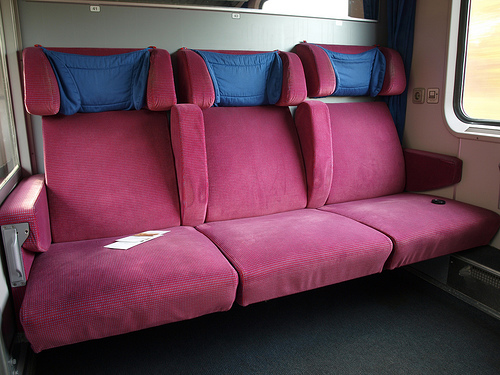 Three seats like this were across from three other seats, often fostering conversation between strangers, and even lasting friendships

On this January day I was anticipating an uneventful trip.   However, soon my compartment was invaded by three talkative elderly women.    I had a window seat and buried myself in Der Spiegel as the train zoomed westward.    At some point one of the women was having trouble putting a bag onto the luggage rack above.   I stood up and offered to help, and she was very thankful.    She asked where I was heading, and I told her Bonn.   I think she could tell my accent was not German so she asked if I lived there.   Yes, I said, but only for this year, as I was actually a student from Minnesota studying in Germany.

She started asking me about Minnesota and my impressions of Germany.   It was a pleasant conversation, and the other women joined in.   At some point I mentioned Germany history, and the false impressions Americans had of Germany because of war movies and images of Hitler and the Nazis.

“I…” one woman said, looking at her colleagues, “we lived through that.”   She paused.

“What was it like?”   It was probably not a politically correct question, as Germans tend to be very sensitive about that era of history.   Yet I was curious.   My German Professor in college, Gerhard Schumutterer, had been in the Germany army in WWII.    We would ask him what he had thought about Hitler and what it was like to be in the German army.   I don’t think we realized how sensitive such inquiries were.   He’d answer patiently, noting that while he believed at the time Germany was right, he had been living in New Zealand with his missionary parents when he was called to the army. 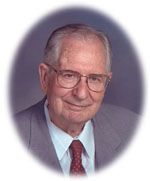 My old German Prof, Gerhard Schmutterer (1919 – 2005), who I thank for getting me to fall in love with the German language and culture.

His father had connections in the Lutheran church and arranged to have him come study at Augustana College in Sioux Falls (where he would later teach until he retired) right after the war.    He said the first night he arrived he was tired and taken to his new dorm room.  Turns out the next day was a big football game with South Dakota State University.   The tradition then was that SDSU students would come and try to break into dorm rooms and paint the faces of students red (SDSU’s colors were red and white).    He hadn’t locked his door, heard screaming, leapt up remembering his time fighting on the Russian front, and when they broke into his room and painted his face red he was sure the Russians had invaded.   What a way to wake up in a new country!

So I wanted to hear the experiences of these women as we traveled across Germany on a non-descript winter day.   The most engaging and insightful woman told me how she was born in Lotsch, Germany and her parents had been supporters of the Catholic party and not too enthused about Hitler.   Yet, she recounted how under the Nazis the economy boomed and pretty soon Germans felt proud be German again. 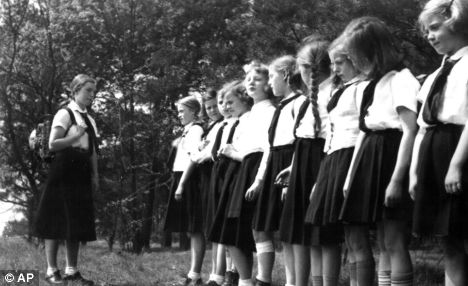 Raised to be patriotic and proud of their country, most Germans thought it self-evident they were on the side of good in World War II

The others agreed — the newsreels at the cinemas would compare Germany’s economic growth in the mid-thirties with the depression in the West, and many Germans felt that they were unified and moving forward.   Other voices were silenced.    One woman recounted how her brother became an enthusiastic member of the Hitler youth, and though he was young wanted to fight to the very end when the war was finally over.   “He never fully recovered,” she said, “he still deep down is a Nazi.”

They started talking with each other, stories about that era – rationing, what happened in the schools, what their parents were doing, friends they lost and how convinced they were that the war had been forced on Germany because others were jealous of their economic success.   One talked about a priest who was genuinely conflicted, believing in Germany and disliking the war and censorship.

They told me of how hard it was after the war, how one who lived in the East hid in a haystack from Russian soldiers who were raping German women and girls.   They talked about how unreal it seemed.   Propaganda had convinced them of their superiority, but now allied troops occupied their towns.

I asked about the holocaust.   One woman insisted it was a shock to her and if she had known she never would have supported the war.  Another woman was more sober.  “I didn’t know about it,” she said, “but I knew Jewish people were disappearing.   People said they were immigrating, not wanting to be part of the National Socialist state.   I think we believed that because we wanted to.  But we could have known.   All the signs were there.   We closed our eyes.”

The first woman disagreed, but the other nodded her head.   They were clearly uncomfortable.   I realized that their war experiences were not that much different than those of the French or British — citizens are brought along for the ride, manipulated and used by leaders with their own agendas. 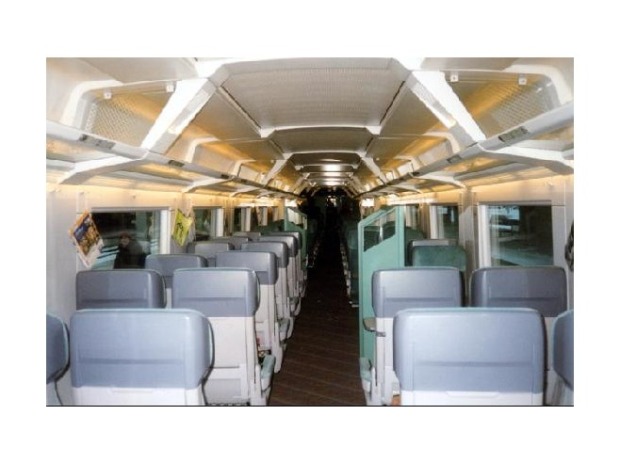 Now high speed trains are comfortable and open. I miss the old compartments.

They exited in Dortmund.   As they got off the train one of them grabbed my arm.  “I have never talked about this in this way or in so much detail.   Not even with my children or grandchildren.”    I nodded, unsure what to say.   “Thanks, I’ve enjoyed the conversation,” I responded.  She smiled.   “Enjoyed?”   She smiled again, shaking her head, “have a wonderful time in Germany, I’m so glad we had a chance to talk.”

I watched them get off the train and walk away as the train left the station.   I thought about my German professor, and how thankful I was that he inspired me to learn the German language.   Without that, I could never have had that kind of conversation.    I also realized that history looks clear in hindsight, but while it unfolds there are numerous shades of gray.    I can’t blame them for not seeing the evil that Hitler represented, nor can I be confident any of us won’t be fooled by someone who promises prosperity and claims war is being forced on us.

This entry was posted on September 20, 2012, 14:41 and is filed under Germany, History, Travel. You can follow any responses to this entry through RSS 2.0. You can leave a response, or trackback from your own site.