The Hard Truth in the Mideast

A mantra when I teach Comparative Politics is that democracy is an extremely difficult system to implement and maintain.   It seems “natural” to us only because we have a culture that has built it over centuries.   It is in fact a system that requires sturdy cultural support and efforts to build democracy often flounder and fail before achieving success.

Last year as we discussed the results of the Arab spring, students speculated on what the region would have to go through.   Most figured it would take 20 to 30 years before we could even hope for a stable democracies across the region (I’m more optimistic about some states).   All predicted anti-American violence and clashes between secular and religious factions.

Alas, we still have a lot of people in the US who seem to think that if bad things happen somewhere else, the United States should get the blame.    Mitt Romney says the President has been too weak, others say a film portraying Muhammad in a bad light riled things up.   Both charges are self-serving and wrong.

Clearly people are mad about the film, but how many Christians in the US go on murderous rampages over a film?   It’s not that Christianity is any more peaceful at its core than Islam — it’s not.   These events are caused by cultural and political instability that will continue for some time. 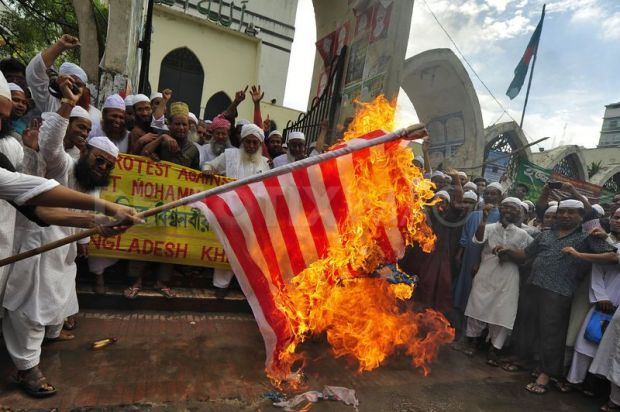 As offensive as the film may be, the cause of this is a history of oppression, dictatorship, and lack of opportunity

Moreover, this isn’t something to bemoan or regret.   It’s better to have instability than to still have Mubarak or Qaddafi in power.    Donald Trump infamously tweeted that the US embassy wasn’t attacked when those two were at the helm, apparently suggesting that we’d be better off with authoritarian thugs in charge of those countries.    But that view is myopic on two levels:  a) it only considers the short term; and b) it neglects the human rights of the Egyptian and Libyan people.

One thing George W. Bush got right was that the authoritarian power structures in the Mideast are anachronistic and inevitably will fall.   That goes for the Saudi royal family as well — they are out of place in the 21st Century and the longer they stay in power the more angry the forces they suppress will become.   The more it appears that the US is enabling the authoritarians, the stronger anti-American sentiment will become.

Dictators like Mubarak, Saddam, Asad and Qaddafi follow in the footsteps of similar regimes of the Ottoman Empire, defining for 700 years the political culture of the region.

What Bush got wrong was the idea that the US could simply overthrow the bad guys and then quickly build a stable democracy in its place.   He overthrew Saddam within a few weeks, but democracy building…that takes decades and can’t be done by outsiders.   So despite money, effort and a strong will to make it work, Iraq descended into chaos and civil war, with the US only able to leave by abandoning most of the original goals for the war.

Egypt and Libya are going through the same kind of turmoil.   Iraq is still in disarray.   When Asad falls in Syria, expect instability to persist there as well.    It’s not something the United States can stop, it’s not something we can blame the President for, nor is it surprising.   In fact, it’s necessary and inevitable.

We in the industrialized West are used to stability.   The wars of Europe are nearly seven decades in the past.   We transfer power with pomp and ceremony, and despite the vicious attack ads, the loser is gracious after the election.   But the West didn’t become what it is without violence, sometimes horrific violence directed against innocents.   We fought tremendous battles over slavery, ideology, and land.    By today’s standards of what a democracy is, ours took over 150 years to build.   Egypt, Libya and other Arab countries cannot be expected to leap to a stable future in a few short years.  The world doesn’t work that way.

John McCain, no doubt driven by good intentions, thinks we should use our military to help out in Syria and elsewhere.   But we learned in Iraq and Afghanistan that even the world’s most potent military power can’t shape this process.    The pent up anger and suppressed interests after centuries of authoritarian rule assure that there is more violence to come.   The lingering rage over past American/European influence assure we will be targeted.  No President can prevent that, no policy can fix it.

In the long run these extremists have no chance, history is against them. But the process has to play itself out.

Ultimately, it’ll be worth the pain.   Trade, technology and economic interests will, over time, overcome the reactionary extremists from al qaeda and other such groups.   It’s better to be on the path towards that future, then simply kept in an authoritarian pressure cooker that will inevitably blow.

The US can’t shape the result, but we need to avoid over reacting.   We should support democratic values as effectively as possible, and recognize that while there was a vicious attack in Libya, the next day brought out far more people protesting in support of the United States.

Extremists tend to see the world in stark terms — it’s either their way or the destruction of their civilization.   That’s how they rationalize such violence.   It only serves their interests if we treat the entire region as if they were all extremists, or if we yearn for a return of dictatorial thugs.   Their future is not ours to make.

In our consumer society it’s easy to forget that much of history was forged through bloodshed and violence.   We want to think the people in the Mideast should be able to go vote next Tuesday and happily embrace democracy and markets.   But change follows its own path, and often that path includes violence.   We should help the victims, do whatever we can to positively aid those who want peace, and we should try to prevent the violence from escalating out of control.   But the cold reality is that this is the start of a long process, one we should welcome, even if we know the transition will be difficult.