In 1987 the Twins defeated the St. Louis Cardinals to win their first World Series

Can it really be 25 years since that magical 1987 victory of the Twins over the St. Louis Cardinals?   Going through some old material I found a Twins Yearbook from 1987, and paged through it.    A number of that year’s championship team were born the same year I was: Frank Viola, Kent Hrbek, Steve Lambordozzi, Al Newman and Tom Brunansky.   Over half the team was born within two years of me — that team was my generation of Twins!

It was an amazing year.   Along with a bunch of others at the University of Minnesota I attended home opener and followed the Twins through the year.     On rainy days I’d often buy $3 bleacher seats, sometimes going to the game alone just to watch.     The Twins went 85 – 77 that year, barely enough to win the division championship.   I don’t think I saw them lose a game when I attended;  their home record was 66-25 (road: 29 – 52).    Luckily they had home field advantage in the series, which they won 4-3, losing the three games at St. Louis.  I’m tempted to go watch the tapes I made of the series, but I no longer have a Beta-max to play them on.

What a team!  Gary Gaetti, the efficient third base slugger, Greg Gagne at short stop, Steve Lombardozzi at 2nd and Kent Hrbek at first.   Superb defense!   The outfield was Brunansky in right, Gladden in left and Kirby Puckett in center.  Viola and Bert Blyleven lead the pitching staff, with Jeff Reardon closing out games with brutal efficiency, usually set up by Juan Berenguer.   It’s like it was yesterday.

Alas, time may heal all wounds but it also dampens all worldly joy.   As I googled the names of the players it was clear that their glory days are behind them.   One of the brighter stories belongs to Frank Viola.    Viola, nicknamed “Sweet Music” was one of the most amazing pitchers to watch back in his heyday with the Twins.

When he was on his game, Viola was virtually unhittable

Viola left the Twins before their 1991 World Series season, and had a few good years (and a few mediocre) before he retired with a 176 – 150 lifetime record, with 1844 K’s.   Since then he’s had a nondescript career coaching baseball, currently a pitching coach for the Met’s A team, the Savannah Sand Gnats.   He’s still with the game he loves, but it’s a far cry from winning Game 7 of the World Series.   Still, his daughter Brittany competed in the 2012 London Olympics as a diver.  Though she didn’t win a metal, seeing his daughter perform at that level must be as thrilling as it was for him to pitch in the big leagues.

As her father was an artist on the mound, Brittany Viola is an artistic diver

But some stories are sad.   One that brought tears to my eyes on many levels is that of “The Terminator,” Twins closer Jeff Reardon.   Reardon was rock solid to shut down the opposition when called from the bull pen with a save opportunity.  He is second on the all time save list.  Yet Reardon lost his son Shane to drugs in 2004.    Shane was 20 – my ’87 Twins Yearbook has a picture of the Reardon family with a young Shane. 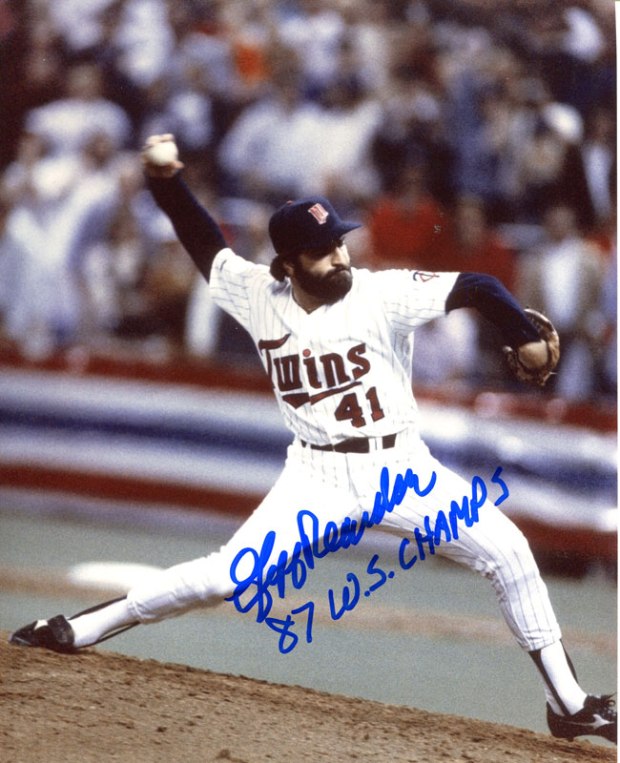 The Twins would not have made it to the series without the most consistent closer in the business in 1987 – Jeff Reardon.

That is sad in and of itself.   But Reardon could not take the death of his son, he fell into depression, was heavily medicated, and then needed heart surgery.   After that he had a urinary tract infection, and apparently the mix of prescriptions left him out of control.   He tried to rob a store and was arrested.  He had also attempted suicide.

Ultimately he was found not guilty by reason of drug induced insanity, his medications were cut down and from what I can tell he’s doing better.   Still, as a father myself, I really felt for him and what it must have been like losing his son.   Add the psychological issues, medications, and torture he went through, and the glory days were far gone.

A mug shot instead of a baseball card

Perhaps the worst story is that of the all around “good guy” and hero of the Twins, Kirby Puckett.   Nobody was more loved than Puckett who drove in the winning run in game seven of the World Series, and four years later would hit a home run to win game six of the 1991 World Series.    He was generous and well liked, but his career was tragically shortened by contracting glaucoma in 1996 and being forced to retire at age 35.   Later he was arrested amid scandals of his affairs and treatment of women, and he died in 2006 of a brain hemorrhage.

In my 1987 Yearbook Reardon and Puckett’s pages are side by side. 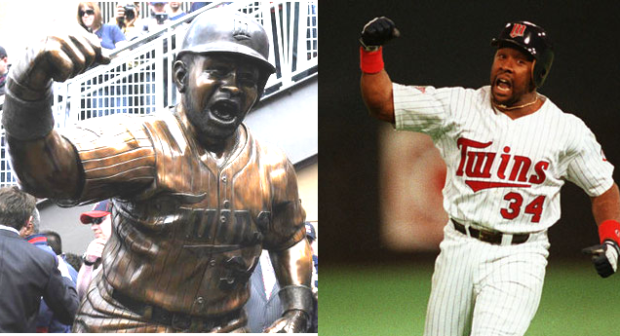 Most stories are anti-climatic.  Steve Lombardozzi has a son who is also a second baseman, playing for the Washington Nationals.  He was born in 1988, a year after the Twins won their first series.   Many are still in the Twins Cities area, including Kent Hrbek.   Hrbek could have been one of the biggest stars of all time, when he came up he was slender, strong, agile and literally ‘a natural.’   No one could play first base defensively like Herbie.   But he didn’t take care of himself, gained extra weight, had nagging injuries and never dedicated himself to being the best he could be.  But he had fun — and I still remember witnessing some awesome homeruns from him at the Dome. 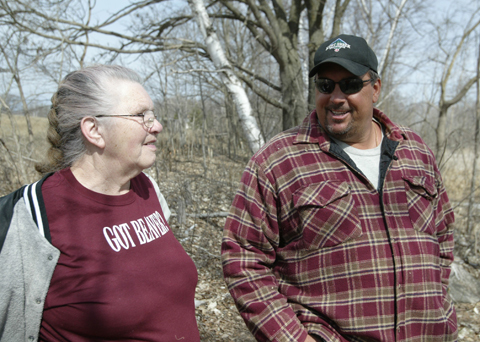 Kent Hrbek could have been one of the greatest of all time. But I have to respect the fact that he wanted first to have fun. He now does an outdoors show.

Tom Kelly, who became the youngest manager to win a World Series, currently works for the Twins, though he resigned as manager in 2001.   His number 10 uniform will be retired on September 8th this year.  I taped Kelly’s only major league homerun back in 1975, putting my cassette tape recorder up next to the radio speaker as Herb Carneal gave the play by play (I did that with every at bat of every player, then taped over the at bat if he didn’t hit a home run — that gave me a nice ‘home run tape’).

Using Google to find “where are they now,” it was odd to think how fleeting the glory from that World Series was.  As a fan the team is forever young in my mind, the 1987 season and series stands as unchangable event.  In reality, the players moved on, and glory faded.   It’s a reminder that life is more like a marathon than a sprint.

And somehow as I close this post I think it’s fitting to remember Tom Kelly’s baseball philosophy:  stay even, don’t get too high, don’t get too down, just go from one game to the next.    Wise words.

This entry was posted on August 15, 2012, 00:04 and is filed under History, Minnesota Twins, Sports. You can follow any responses to this entry through RSS 2.0. You can leave a response, or trackback from your own site.