Greece Steps Back from the Abyss 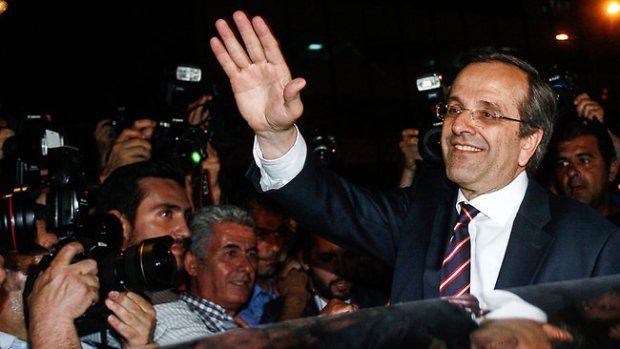 Last weekend the Greek people faced a decision on their future with their second election in as many months.   The first election, held May 6th, was a shocker.   Greek austerity, forced upon the country by the European Union, led to a massive deepening of the Greek recession and a significant drop in the standard of living and quality of life in Greece.   Few countries have seen such a dramatic and unexpected decline as Greece has.

The people felt humiliated.   They realized that their leaders had been lying and gambling with their country’s future, putting the country in tremendous debt, fostering corruption, and then leaving the Greek people holding the bag when everything fell apart.    On top of that the Germans and the rest of the EU needed to bail them out, helping not average Greeks, but the politicians and banks that created the mess.   That anger came out in the election results.

New Democracy, the conservative party, had the most votes with 18.85%.  That won them 108 seats, thanks to the bonus of the largest party getting 50 more seats than the percentage should earn them.   That was down from 33% in the previous election, though they gained 17 seats since in 2009 they were not the largest party.

The ruling party, PASOK (left of center) fell from 43% to 13.18%, losing 119 seat (and ending with 41).    The surprise winner was the radical left wing party Syriza, led by Alexis Tsipras.   Tsipras tapped into the anger and humiliation to rise from 4% to 16.8%, passing PASOK.   The result took Europe by surprise.   In a 300 seat parliament, even PASOK and New Democracy together couldn’t form a ruling coalition, as they controlled only 149 seats.   Talks with other parties made it clear that any government that they formed would be shaky and could easily fall, which is not a good thing when the country has to make very difficult decisions. 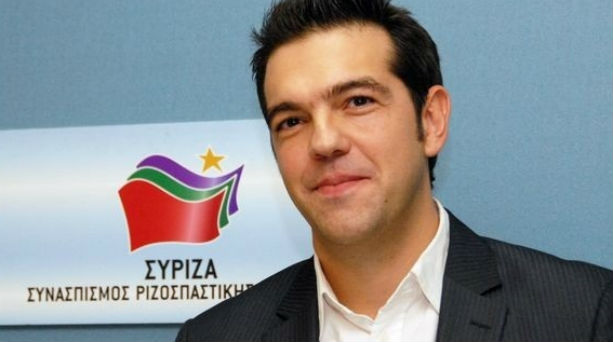 37 year old Tsipras signals a left wing challenge to Euro-orthodoxy. If the main parties can’t show real progress, he could emerge stronger in the next election.

In the uncertainty of the moment they decided that the most prudent course of action was to ask the voters if they really meant it.   A new election was planned for June 18.   As the campaigning grew it was clear that Greeks were reading the election as a referendum on the Euro and to some extent the EU.    Should Greece remain in the Eurozone?

Tsipras made a confident, powerful and emotional argument that they should not, unless they get real concessions from the EU.   Do the Greeks really want to have their sovereign decisions made according to German dictates?   Should the Greeks accept an austerity that requires them to see the recession cascading inward and causing more pain for average folk?   Shouldn’t the politicians of PASOK and ND (New Democracy) be punished for their corruption and willingness to drive up such debt with horrific fiscal policies? Shouldn’t the Greeks be in charge of their own destiny?   After all, the Europeans want to “save” Greece to save their own banks — doesn’t that mean Greece has more bargaining power than they realize?

As Tsipras’ popularity grew many assumed Syriza would end up on top in the June election, perhaps with enough votes to form a stable coalition.   The result would dramatically increase the odds of a Greek departure from the Eurozone, even though Tsipras coyly claimed he simply wanted to negotiate “fair” terms.

After early reports had Syriza as narrowly winning as the largest party, the actual results gave that honor to ND.  ND earned nearly 30%, up over 10% from a month before, now with 129 seats.  Syriza also increased its share to 27%, gaining 19 seats.   That means that compared to 2009 it rose in popularity by 23%.    Although they didn’t come out on top, it was still a remarkable performance for a radical party once seen as too extreme to be taken seriously.    PASOK fell further, losing 8 more seats and down to 12.3% of the vote.     The former ruling party was clearly being punished.

Yet PASOK and ND could combine for 162 seats for a clear majority in government.   To provide added stability they added the pro-EU Democratic Left, whose 17 seats gives the coalition 179 out of 300. 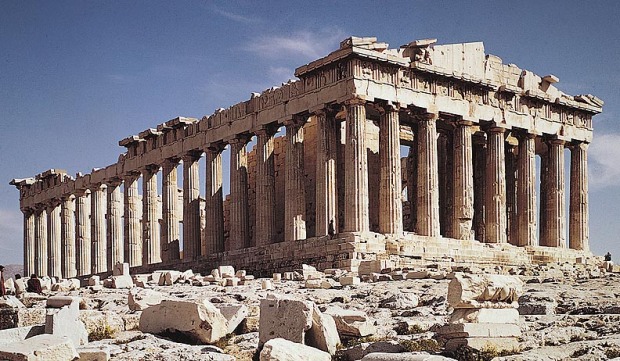 The first recorded moves towards democracy came in Athens; it was messy but voters show democracy still works.

So what does this mean?  The Greeks took a hard look at what Syriza represented and found it scary.   The party is Euro-communist, and its radicalism would put it in opposition to the rest of Europe.  Many fear that it would drift towards dictatorship, like past Communist parties did.   That seems unlikely, but many Greeks angry about the situation didn’t want to leap to the far left or the far right — those ideologies have a poor track record.

They also had time to digest what would happen if they brought back the drachma.   First, they’d see the value of their currency plummet, which would force them to default on loans.   Second, they’d not be able to get new loans, people would trust neither the Drachma nor Greece’s ability to pay them back.    That would either mean a fall into near third world status or, should Greece try to use monetary policy to stimulate the economy, a risk of hyper-inflation.

More importantly, they wouldn’t be part of Europe any more, at least not the civilized united and progressive Europe that the EU represents.   The Greeks know that a small backwards troubled economy south of the Balkans could drift farther from the prosperity and stability that northern Europe represents.   Independence and sovereignty sound good in theory but in practice they represent a fading era.  Greece without Europe would be a Greek failure.

The problems have not been solved.   The austerity program as currently structured is too harsh and has no growth aspect designed to help Greece truly restructure its economy.    With the rise of French President Francois Hollande as a foil and potential partner to Germany’s Angela Merkel, the EU has the hard task of formulating a new approach that isn’t so harsh on Greece in exchange for stricter monetary policy controls.    The banks are going to have to take loses – the problem can’t be solved by governments alone. 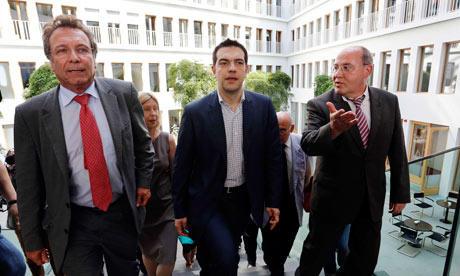 Tsipras (center) has allies in Germany in “die Linke” (the left), a party to the left of the Social Democrats. Here is talks with Klaus Ernst and Gregor Gysi in Berlin.

But some of the urgency has gone away.   They have time, and in Germany, Greece and elsewhere there is growing recognition that a contraction of the Euro to an inner core of wealthy countries would damage everyone.  And the longer this drags out, the less likely it is that things will fall apart.  The EU and the Euro are revolutionary, they are redefining what a “state” is, what “sovereignty” means and how economies are structured.   Such transformations are never easy, but most Europeans realize there is no turning back.

This entry was posted on June 21, 2012, 03:54 and is filed under Democracy, Economic crisis, European Union, François Hollande, Germany, Greece, World Affairs. You can follow any responses to this entry through RSS 2.0. You can leave a response, or trackback from your own site.