Deutsches Museum: the history of technology

Tuesday was a rainy day in Munich, so we took in the Deutsches Museum, an awesome monument to technology and the role of Germany in creating the world we live in now. When we arrived the students went into the first room and I went to use the toilet. I didn’t see any of them again until our arranged meeting time three and a half hours later. None of us were hiding, the museum is that immense!

Visiting the museum really helped me put into context the age we are living in, and how it marks the transition of one kind of society to another. We are leaving the machine age and entering the digital age!

I’ve never been to a museum with so many parts and sometimes full airplanes and cars on display, including jet engines, models of different types of planes, smaller plans parked or hanging from a ceiling. They also had a full display of wooden ships, both models and a full size fishing ship.

Yet more interesting to me is getting a sense of how technology has changed lives. There was an entire display on the printing press, including a replica of Gutenberg’s original, how it was improved on over the years, different styles, linotype machines, up to modern digital methods. There was an exhibit on film and camera, with hundreds of cameras up to modern digital cameras there. Kitchen equipment, electric generators, motors of all sorts, musical instruments, metallurgy, mining, tunnel building, toys, nano and bio technology, oil and gas, energy in general, space flight, glass blowing, genetic research, industrial machinery, tools, optics, atomic physics, pharmaceuticals, ceramics, astronomy, telecommunications, agricultural technology, radios…and more (even Zeppelins!)

I thought I was perhaps pushing it when I told the students to meet back in three and a half hours – I’ve seen students “do” the Uffizi in Florence in 20 minutes. Yet this was so massive you couldn’t do it properly spending the whole day.

Each of these eras had its own cultural and political structure. From the cottage textile weavers to the first factories, both politics and every day life changed dramatically as technology improved. I imagined the huge factories of the mechanical era. Or accountants working with mechanical calculators, so large and complex. The era of machines! 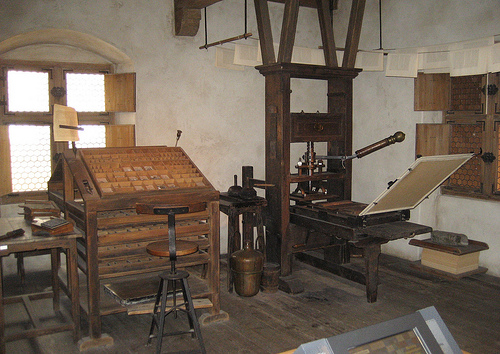 There was a model of the DC Douglas plane that formed the first fleet of Pan Am jets, which could go from New York to Frankfurt in 13 hours.

Looking at the first cars — some really attractive models were produced by auto companies in the 1920s — innovative, often strange, showing that there was not yet a standard design for cars.

A 1925 aluminum car was innovative!

Now we’re in the digital era, even the electronic equipment (record players, radios, etc.) was obviously from a different time. In fact, one can put a date on it. For most (but not all) the exhibits the 1980s marked the start of a shift to technology driven by our vastly expanding computer and information technology.

We’re at the start of a change that will have as dramatic an impact on our lives as the rise of industrial era had. It will change politics, culture and life in ways we can only imagine (and much is outside what we now are likely to imagine!)

And that’s probably a good thing. The era of the machine needed vast quantities of power to reshape the world. With oil running low and concerns about global warming, how we get the energy to run whatever world will emerge will have to be different. But seeing the range of innovations of the past, created often as solutions to problems of their times, I end up optimistic that the era just beginning will be better than the one just ending.

This entry was posted on May 16, 2012, 19:54 and is filed under Germany, Technology, Travel. You can follow any responses to this entry through RSS 2.0. You can leave a response, or trackback from your own site.