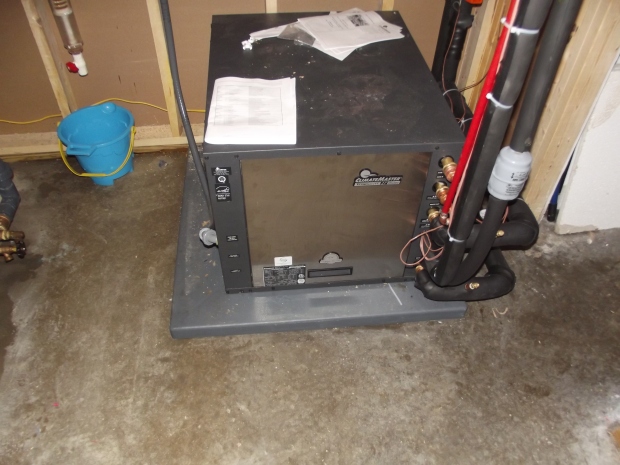 The heat exchange unit, which sends warm or cold air to the attic where a fan then sends it through the house

Last June I blogged about our installation of a geothermal heating and cooling system in our house.  (The link is to one of the final blogs, go earlier in the week to see the process).   Now seven months later it’s time for an update.

It is winter.   You can’t tell by looking out the window because we are barren of snow.  That is exceedingly rare for December 30th and has destroyed my plans to spend the week skiing with the boys here in town.    We did get a two inch snowfall on December 23rd that melted on December 26th.   Maine without a white Christmas would have been an abomination!

So far the geothermal system gets a mixed review.  It does a quick, reasonably silent and comfortable job heating and cooling.   It’s nice that air doesn’t blast out of the ducts; it’s even hard to tell when the system is running.    As expected, there isn’t a lot of heat being pushed to the basement, so while we keep the upstairs at a comfortable 68 when we’re around, the basement is usually a good five or six degrees cooler.   We do have a space heater we use sparingly (and we could turn on the oil heat if we really wanted the basement toasty).

We don’t seem to be saving as much money as we hoped to.   We haven’t seen any help from our desuperheater, designed to provide hot water.    I expected better from something called a ‘desuperheater.’   It is supposed to augment our boiler, which now is used only for hot water and back up heat.   The goal was to burn 15% of the oil we used to, but it’s more like 30% –  which is pretty much what hot water costs anyway!   The boiler acts as if the desuperheater isn’t there. 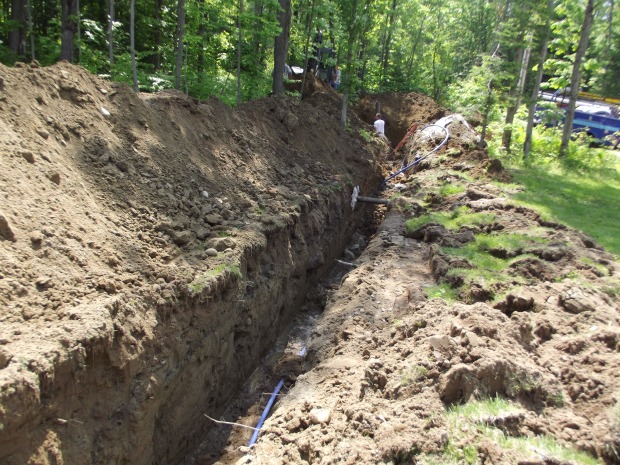 To install it we not only had to deepen our well from 360 feet to 840, but dig up the front lawn to connect a second pipe for returning the water. The well provides both domestic water and geothermal.

I plan to increase the temperature of the water sent from the geothermal unit to the hot water supply.   I originally set it to 125 instead of 150 out of fear that water too hot would burn the kids.   I think the water sent would mix with cooler water so I’ll experiment with that.  If the kids start suffering 2nd degree burns I’ll turn the temperature back down.

The other issue is electricity.   Unfortunately our electric bills haven’t been consistent.   Despite the new use of ‘smart meters,’ a device which sends information on usage to the company so CMP can lay off meter readers, we seem to be getting a lot of estimated bills or wild fluctuations from month to month.

In summer the cooling didn’t increase the cost much, but last month’s bill spiked.   If that continues (one month is hard to go by with electric bills, you have to average them out), we could be looking at $500 more for the three  coldest months, and  probably about $700 more for the rest of the year.   Even that is suspect because we had two dehumidifiers pumping water out of the year non-stop this summer since my wife got concerned that there is too much mold in the basement air.   I thought it added character to the atmosphere but her sinuses disagreed.

If those figures are accurate that would mean the additional electricity would cost about $1200, or $100 a month on average.   That would make our savings $2100 for the year.   If we can’t improve on that it will take the system as much as 15 years to pay for itself.

So far the system has only malfunctioned once, and Jeff Gagnon Heating and Plumbing was there early the next day to fix what was a minor problem (free of charge, of course, as it is under warranty).   I gotta love Maine — we weren’t able to be home when they could stop by, so we just left the house unlocked.   That’s typical here.   During that time it was nice to have oil heat back up.   We also had a 13 hour power outage in mid-autumn which also required us to use oil.   We have a generator, but it’s not powerful enough to start the geothermal system.   The electrician who worked on the installation just laughed heartily when I pointed to my generator and asked if it would be enough to keep the geothermal going.

Despite that, I still do not regret installing the system.   My wife – a CPA much more in tune with money issues than a dreamy academic like me – isn’t so sure.    But if oil prices sky rocket, the payback time could decrease quickly.  Looking at headlines from Iran, Syria, and the Mideast I find it a bit comforting not to be relying completely on oil.

We have heat going down to the basement through three upstairs closets; so far it's providing minimal but valuable help

I also really like having air conditioning in the summer.   You don’t need it in Maine, but if you’re going to entertain guests, cook indoors, or be comfortable on those hot weeks (and we seem to be getting more of them), it is very pleasant.   We couldn’t have had central air without duct work being done anyway, and that was a chunk of the cost.    We would never have gotten central air for that reason and a few window units would have been a pain.   There is real value to having a cooling system!

Finally, I’m not yet convinced about the cost.   I need more data about the cost of electricity over a full year, and I hope to get the desuperheater to provide more relief heating water.

So the unit works well, we get good heat, and I’m happy with it.   We don’t seem to be saving as much as we hoped for, and the basement stays chillier than the upstairs.   Nonetheless seven months in I’m still glad we did this!   My wife tells me that even if I get a major midlife crisis I’d better be happy with my Ford Fusion for at least another decade — this was my expensive toy of choice.   I can live with that!