“One Hundred Years From Now” and “Cyclorama” 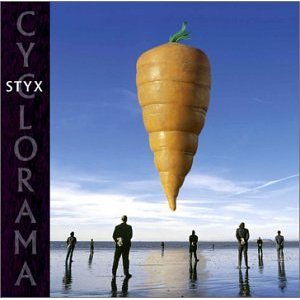 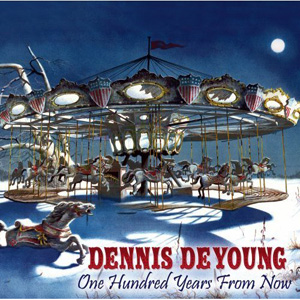 I thought it would be fun to compare the most recent solo album by Dennis DeYoung: One Hundred Years from Now with the most recent studio album of new songs from the band Styx, Cyclorama.   DeYoung’s album came out in 2007 in Canada, and then was released with some changes to the US in 2009.   Cyclorama was released in 2003 and is the only Styx studio album without DeYoung’s presence.   DeYoung’s album apparently did not chart in the US (though it hit number 1 in Canada), while Cyclorama reached 127 on the Billboard chart, selling about 50,000 copies.   I’ll start with the older album.

I believe Cyclorama is an excellent album and I enjoy it more as I listen to it more.   It’s just not really a Styx album for me.  Without DeYoung it seems like a very different band.   Not a bad band, but a different band.   The album has a number of highlights.   James Young shines with These are the Times, his best song since Miss America.   It is a powerful hard rock song that probably could not be written by a young man.  It reflects the wisdom of experience along with the recognition that choices matter.   One with Everything by Tommy Shaw is another of my favorites — on so many levels the song moves and amazes me, the music is one with the lyrics, it is on my list of all time favorite songs.  Lawrence Gowon, who replaced DeYoung, also contributes solidly to the album, especially with the socially and psychologically relevant More Love for the Money.

The album has no clunkers.   Killing the Thing that you Love drags a bit for me, and is the song I most often click past. James Young’s Captain America is OK; the idea is good and the music rocks, but the song itself seems to be missing something.   Otherwise, every song is enjoyable, well produced and well written.    Tommy Shaw’s contributions reflect some of the best song writing of his career, showing that he has grown as an artist.  Rather than following old formulas, he explores new ground and each song is interesting and compelling.

One of my favorites is Kiss Your Ass Goodbye by Glen Burtnik, a song which combined with the Bourgeois Pig bit by Billy Bob Thornton at the start is the kind of break from the norm that compares to Mr. Roboto and Plexiglass Toilet.   It’s a novelty song, but fun.    It also adds to the complex variety the album offers while still seeming coherent and connected.  In that Shaw’s One With Everything captures the spirit of the ablum — diverse, yet a true unified effort.

One Hundred Years from Now by Dennis DeYoung sounds more like a Styx album than does Cyclorama.   In fact, it’s got a collection of songs that rival anything DeYoung wrote either solo or as a member of Styx.   Given that on any given Styx album his contributions represented three or four songs, his ability to put together 12 tunes this good is amazing.  I have since ordered his Hunchback of Notre Dame musical and will listen to that as well!

The title track, done on the Canadian version partly in French in a duet with Eric Lapointe, is done in English by DeYoung alone on the US release.   To me it is up there with Suite Madame Blue, Unfinished Song, Grand Illusion and Pieces of Eight among DeYoung’s best efforts.  It combines a pleasant, catching and powerful melody with lyrics conveying a profound message.

Another song that I find riveting is Rain.   It has DeYoung’s hallmark talent of writing a melody that is intensely powerful yet accessible, evoking images of real devastation (apparently Katrina was an inspiration) as well as being a metaphor for one overwhelmed by life.    Crossing the Rubicon is a deep and almost mystical song that reflects wisdom and experience.  As one ages one has to recognize the need to move on and make changes; instead of ‘waiting for a better day,’ you have to take risks and move onto new ground.   If you’re like Estragon (the character from “Waiting for Godot” to whom DeYoung alludes) you’ll simply be waiting for death.  Each time I listen, the more meaningful the song is for me.

There was a Time is a reflective look back, reminding me a bit of his earlier Goodbye to Roseland, but better.   Private Jones is a hard rock tribute to those who fought in the post 9-11 wars, reflecting the uncertainties and disappointment of those whose patriotism seemed confronted with an ambiguous reality.

There’s also a group of songs that has a spiritual sense of human faith in relationships: Save Me, I Believe in You, and Forgiveness.   Breathe Again rounds off that list, being a very personal song from DeYoung to his wife Suzanne, yet a powerful statement in its own right.  Two of my favorites are social commentaries on the information revolution: I Don’t Believe in Anything and Turn Off CNN.

Any fan of Styx in its heyday will appreciate DeYoung’s solo effort.   He’s allowed himself to create an album with the elements that made Styx one of the most successful bands of its era, but doesn’t do so in a formulaic manner.  The songs show his versatility both as a singer and song writer.    His voice sounds very much like it did in Styx’ heyday; to me the album stands alongside Grand Illusion and Paradise Theater in quality.

The good news, then, is that both Styx related acts have quality.    Like the original band in the early days, both refuse to take short cuts or coast.   Cyclorama‘s songs are fresh, exciting and coalesce a diverse set of elements into a superb album.   Dennis DeYoung captures the spirit and sound of classic Styx in a dynamic, fresh collection of songs.   The bad news is that neither CD sold enough to create anticipation of new material any time soon.   It’s unclear if the current Styx lineup will ever release another set of new songs (songwriter Glen Burtnik has left the band since Cyclorama) and DeYoung has a variety of projects.

The quality of these two CDs hint that a studio album reuniting Styx and DeYoung could be big.  Shaw and DeYoung showed in these albums that they are if anything better song writers than they were in the past, and James Young’s These Are the Times hints at his capacity to contribute a gem.   If they came back together and pooled their creative juices, having the maturity and perspective to realize that product they create is worth not delving into past disagreements and fights, they could not only have a better album than either of these two, but one that might actually sell — Gold, perhaps even platinum.   What a coup that would be for a band that’s been around in some form for almost fifty years!

They need not lose Gowon either.   With CDs running 65 or 70 minutes, he could contribute some songs and an expanded Styx could satisfy and unite a fan base that’s often been split between DeYoung fans on the one hand and Shaw-Young fans on the other.   DeYoung and Chuck Panozzo are the only true original members of the band remaining, it would be a fitting cap to the band’s career to heal the rift.   If DeYoung’s other projects and dislike of heavy touring continues, that would no longer be a problem.  He could perform some big concerts, and Gowon could handle the longer tours.   The band could be reinvigorated and fans would be delighted.

A pipe dream?   Are the egos really too big and the feelings too sensitive?  I hope not.  DeYoung has claimed he’s willing to try it again.   The others might decide its worth a chance for another best seller and spike in their career.   They may feel that it would be a gift their fans deserve.   And maybe, as they shot past age 60 and start to look mortality in the face, they may realize that the collective magic that gave them five straight multi-platinum albums deserves another run.

This entry was posted on October 7, 2011, 02:14 and is filed under Dennis DeYoung, Entertainment, Music, Styx. You can follow any responses to this entry through RSS 2.0. You can leave a response, or trackback from your own site.