Posted by Scott Erb in Entertainment, Media, Television on September 1, 2011 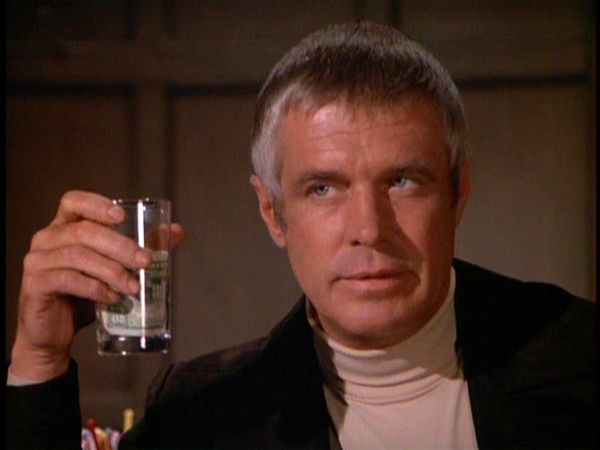 There’s an old Polish proverb that says when your mind is in the past, listen to the sound of a watch being wound.

Well, that one was never on Banacek, but there a number of them listed here.  Or watch them:

Before he was Colonel Hannibal Smith of the A-Team but after enjoying Breakfast at Tiffanys with Audrey Hepburn, George Peppard played Thomas Banacek in a two year 16 episode series in 1972-73 (the same time Styx was making those Wooden Nickel albums).   I just purchased the DVD collection of the series and find it as enjoyable as I remember, one of my favorite series of all time, even if it had such a short run.

Peppard played millionaire free lance insurance investigator Thomas Banacek, a sauve and sophisticated puzzle solver of Polish descent (despite an oddly Czech sounding last name, pronounced Banachek).   The show, set in Boston, always started with an impossible crime.   Something got stolen when protection was tight, when there was no conceivable way a thief could have made the heist.    During the show as you watch Banacek investigate, you’re also trying to figure out just how it was done.

I think what makes the show is the personality Peppard gives Banacek.  He’s a tad arrogant and smug, but always in a pleasant way.  He keeps his cool, has a good sense of humor, luck with the ladies, and he irritates the insurance investigators who inevitably are angry that Banacek is on the case.   As a freelancer he gets 10% of what the insurance companies would have had to pay out (sometimes in the hundreds of thousands of dollars — and that’s 1972 dollars!) if he solves it, while the insurance guys slave for a salary.

There is of course always a beautiful woman involved in some way.   But what makes Banacek so appealing (and a role model when I watched the show — not in its original run but a few years later on re-runs) is his calm self confidence, amusement at the follies going on around him, and his refusal to work for anyone but himself.   He guarded his independence quite fiercely, even with the ladies.

It was mostly a cerebral show.  Banacek got in fights but they were brief and usually he used wits over braun to come out ahead.  In one scene the guy who would later play “Jaws” in the James Bond movies is trying to beat him up, and Banacek doesn’t have a chance.   He manages to briefly elude “Jaws” and then puts his billfold with $100 bills hanging out in the engine of a junked car.  When the crook, thinking Banacek gone, reaches in to get it, he slams down the hood and is able to knock out “Jaws.”  He then calmly takes his billfold back and walks away.   The show was about the puzzle, the bad guys were often insiders manipulating the situation.

Banacek had a chauffeur, a likable Sicilian named Jay Drury, played by Ralph Manza.  He helped provide humor — and the show had a lot of subtle dry humor (another reason I love it).   Banacek also had a friend who was owner of a bookstore that specialized in rare books, played by Murray Matheson.   He would do research for Banacek, and again added humorous banter.   A very short example:

Banacek, being wealthy, had a telephone in his car.  He’d have to call the mobile operator to connect him and his cars were vintage models.  It all demonstrated that he had fine taste, wealth and knew how to live.

I also like how he was fundamentally moral and ethical (unless you’re one of those who thinks a single man shouldn’t mess with women before marriage) yet also didn’t make it emotional.   He might smile when a villain says or does something bad, not in a happy way but in a bemused “that guy’s got a problem” manner.   He’d talk to them in a friendly, respectful way, even if he despised them and was plotting their arrest.  It was as if he were above it all, amused by the spectacle and the fact that he could make lots of money solving puzzles that others could not.

Almost always the plots involved personality flaws of the villains (or even the victims) which Banacek would see through and manipulate to his advantage.   The psychological twists add to the mystery and the humor to make a thoroughly delightful show.

Still, the core was Banacek, affable, smiling, never losing his cool and always having a witty (if at times smug) come back to insults and efforts to put him down (such as how the investigators from the insurance companies would purposefully mispronounce his name).   When someone mentions the hostility from the company’s investigator is reply is always the same: such hostility is an “occupational hazard.”   It was agreat show — and worth purchasing on DVD!  If you want some samples, here is a scene where he encounters Margot Kidder, who would later go on to play Lois Lane (with a Superman reference six years before she’d get that role):