Continuing with the Styx theme, one song stands out in thinking about the chaos in Washington surrounding the negotiations on raising the debt ceiling.

In their 1979 triple Platinum album Cornerstone, one of the best songs was “Borrowed Time,” co-written by Dennis De Young and Tommy Shaw.   The song was supposedly a reflection on the US in the late seventies, but more poignantly it predicted the path the country would take the next thirty years.  The lyrics read, in part:

“I had my car, and I made the scene
Didn’t give a damn about no gasoline
They can go to hell
My friend we never thought about the world
And its realities
The promised land was ours
We were the Great Society

I’m so confused by the things I read, I need the truth
But the truth is, I don’t know who to believe
The left say yes, and the right says no
I’m in between and the more I learn
Well, the less that I know
I got to make a show
Livin’ high, living fine
Livin’ high on borrowed time”

When this song came out, the US debt to GDP ratio was 30%.   Our debt as a proportion of GDP would double to 60% by 1990 as the Reagan Administration infamously claimed “budget deficits don’t matter” and created the appearance of prosperity through deficit spending.   Given that oil prices were going down as well, people thought things were going fantastically, especially when the Soviet Union fell and the US won the Cold War.

In the 90s the current account deficit, which also started growing in 1981 (basically meaning that we were borrowing from foreigners to finance our consumption) rose to new heights as the US experienced the dot.com bubble.    Much of that was also an illusory economy, but at least the budget was balanced.   After 2000 the borrow and spend mentality continued, the current account deficit grew, and these imbalances finally exploded into a deep recession in 2008.

Thirty years of living high on borrowed time, and now the politicians and the public demand a quick fix.   There isn’t one.   We’ve been living beyond our means for thirty years.   Even when the federal budget was in balance, private borrowing was soaring (and the private sector is no better than the government in this regard — public debt is about 80% of GDP now, private and public is near 400% of GDP).    We consumed on credit, even as we as a nation were producing less.  Consider this analogy:  what if you as an individual were burning 2000 calories a day, but consuming 2100?

It might seem like your eating wasn’t out of line; 100 calories is half a candy bar.   But in 15 years you’d find that your weight would have gone from 175 to 320.   In 30 years you’d be up to 470.   You’d experience massive health problems and you’d find your excess of 100 calories a day — a tiny snack — yielded tremendous problems.   There would be no quick fix, you’d have to eat less and exercise more to lose weight, and it would take awhile.

The problem is the same with us — we have to spend less and increase revenue to get our budget under control, and find a way to produce more while consuming less.   That’s what a recession forces you to do, there’s no escaping it.   To blame Obama for not “fixing” this (or to blame it all on Bush) misses the point.   We’ve done this to ourselves as a society, the politicians can no more bail us than a doctor can undo decades of overeating.

As we argue about whether or not to raise the debt ceiling, note how we’ve decreased taxes and raised spending at the same time.   I gave this graph last year, but it’s worth repeating 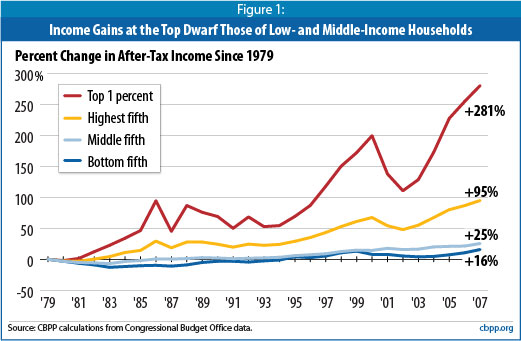 In the last thirty years most of the wealth gain has gone to the top 1%, gaining 281%, while the top 20% gained a total 0f 95%.   The middle fifth and lower (60% of the population) did not gain enough to keep up with inflation.   Moreover, as graphs posted last December show, the US tax system is the least progressive in the industrialized world.  Our wealthiest are the richest in the world, while our poorest are in the same category as Greece or the Czech Republic.    Finally, tax increases do no more harm to the economy than spending cuts; in fact, since money that would be gained by tax rate hikes otherwise often go to buying foreign goods or paying down loans, cutting spending hurts the economy more than tax increases do.

So it’s a no brainer.   The wealthiest, who have had their taxes cut dramatically in the last 30 years, and who are taxed a historic lows, and lower than in any other industrialized state, have the capacity to pay slightly higher taxes to help us deal with the budget crisis and getting our house back in order.    The Republican refusal to allow any kind of tax increase is based on fantasy.   It’s like a religious belief of their base that taxes are always bad.  Sometimes, you need to raise them.   If Democrats have to accept that some of their programs need to be cut, well, Republicans have to accept that the rich might pay a little more in taxes.   Even with Obama’s proposals they’d pay less than in other industrialized states, and less than Reagan’s tax proposals back in the 80s.

So as the fiasco continues, as the negotiators try to prevent financial meltdown, the House Republicans are acting like petulant children, sticking their lips out and saying “we’ll never cut taxes, we don’t want to compromise, you have to do it our way.”   House Speaker John Boehner has been more adult, but he doesn’t seem to be able to control his party.   He’s like the dad in the station wagon screaming to the kids to behave but they ignore him.   Cantor is like the mom taking the kids side, leaving the poor dad unable to control the situation.   No wonder the public gives Congress such low rankings!

This crisis is a bipartisan creation.   30 years of economic imbalances won’t be solved overnight.   Adults have to make compromises and sometimes do what they don’t want to do.    The Democrats will have to make cuts, including entitlement reform.   Republicans will have to accept tax increases on the wealthy.   Americans will have to learn that you can’t live 30 years on borrowed time and not have difficult adjustments to recover.