The Empire Falls, the Church Rises

Today we offered a diverse set of seminars and excursions as students choose what they wanted to learn about with more depth.   I held an evening seminar near the Vatican with students who had just visited the Vatican museum and Sistine Chapel.

Earlier a large group of students went with me to see the Colosseo, which now includes a museum covering that part of Rome before it became the spot for  the Colosseum.   Being in the center of Rome it had palaces and even a human made lake.   Only after the fire of 64 AD destroyed the region could a grand Colosseum be built.   This a definite a case of turning a crisis into an opportunity.

In awe of history!

Originally the Colosseum held brutal sporting events, including the gladiators, hunts, executions and a variety of violent entertainment.   When the grounds got too bloody, a layer of sand would be added.   55,000 spectators could come, most in shade provided by awning over the top (something we would have liked to have had today).

Many know that Christians were martyred here, but the relationship between early Christians and the Church is complex.   Despite some bouts of persecution, Christianity was usually tolerated even while banned.   Women were more likely than men to convert to Christianity, in part because Roman customs made women clear second class citizens.   Starting slowly, Christianity grew as the empire headed for decay.   Ultimately the empire fell as the church rose.

The roots of the rise of the Church go all the way back to how Paul settled a dispute early on.   Did one have to convert to Judaism to become Christian?   If so one would have to follow Jewish laws, men would have to get circumsized (that might dissuade some would be converts), and the religion would have the identity as being a sect within Judaism.   Paul, looking back to the story of Abraham, said “no,” meaning that anyone could convert without having to worry about Jewish law.   This turned Jews off to what had been a Jewish sect, and it quickly became appealing to non-Jews — and the Romans.

As the faith grew in numbers, Christianity was tolerated.   The catacombs started as secret burial grounds, but in time it didn’t matter.   There were so many Christians and Rome had a history of tolerating diversity (given the size of the empire) that any persecution faded.

Luckily the sun went behind the clouds so the Tevere river was peaceful; Castel Sant Angelo in the background (near the Vatican)

Finally the emperor Constantine (272-337) lifted the ban on Christianity and himself converted.  After his death Christianity was made the religion of the empire.    This wasn’t just a spiritual choice, but a practical one.   The empire was cracking and Romans were less willing to go into the military then ever before — they preferred a comfortable life.   Many refused because of their religion — early Christianity was a pacifist religion.  Christ didn’t fight back, he knew that the real world was the spiritual world.   Better to suffer or die in the material world than to risk your eternal spiritual soul by breaking God’s commandments.

Now the Romans had put the Christians in a quandary:  Do you let the now Christian empire collapse so the pagans take over?   Or do you fight to save Christianity?    Augustine (354-430) answers that you can fight — but only if it is a just war.   That wouldn’t be enough.   In 476 Romulus Augustulus was deposed as the last Emperor (though the eastern Byzantine Empire would continue)   The Barbarians may have defeated the Roman Empire, but they ultimately converted to Rome’s new religion.

As the world fell apart, Augustine espoused a spiritual theology that distrusted the material world.   The material world tempted humans to break God’s commands, and thus should not be the focus of our life.   With that other-worldly view, Europeans quickly lost the knowledge held by the Romans and life became local and defined by tradition.   The idea of progress was non-existent.   Better technology was in the past; this life was to simply get through so one could move on to eternal joy.

While some blame the Church for stifling creativity, the charge is unfair.   The world was changing in a way that would have destroyed Roman knowledge anyway.  What the Church did was actually preserve as much as they could, taking books and other artifacts up into monasteries where Roman knowledge was protected, even if it was also ignored.    Without Christianity we may not have had the renaissance because there may not have been enough knowledge to rediscover.

Augustine’s theology also linked the Christian world with Greek thought, particularly Plato’s idealism.   Many said God sent Plato to Greece to prepare the way for Christianity.  That idealism — the turning away from the material realm to focus on the spiritual — led to a world where tradition would dominate and change was extremely slow.

Fast forward to the 1200s.   Information and texts had been seeping into Europe from the Islamic world, generating a new interest in old Roman ideas and knowledge.  In 1066 the first modern university opened in Bologna.   By the 1200s Islamic rationalist scholars like Averroes and Avicenna were read in Christian Europe, creating an intellectual wave of dissent.

Thomas Aquinas (1225-1274) would stand out as the figure who pushed the church into accepting Aristotle and making progress and a focus on the material as well as the spiritual acceptable.   This set in motion the process we’ve been discussing whereby humanism and ultimately a belief in abstract reason and the laws of nature would push aside religious authority.   The church tried to make Aristotle an authority not to be question, but as we’ve seen, Galileo and others would themselves read Aristotle and recognize that his philosophy went against unquestioning obedience to authority in intellectual matters. 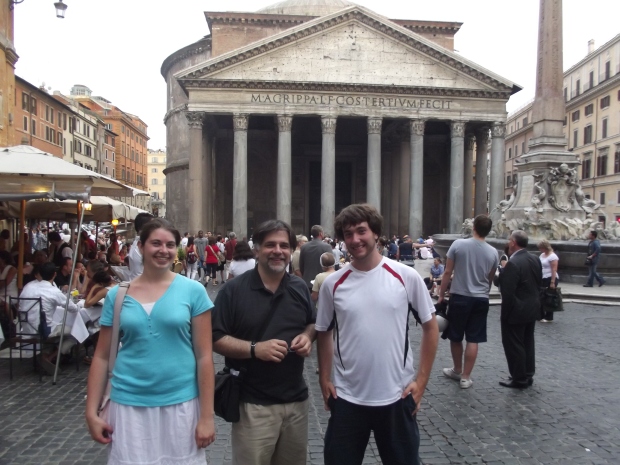 Two students (Diana and Chris) wanted a "good restaurant;" we had an unbelievably delicious meal

While the ideas had been growing well before the 1200s, and change would have come to Europe even if Thomas had not been born in Napoli in 1225, he functions along with Augustine as convenient bookends for the a broad view of the history of western civilization.   From Augustine on the Church prevents a total collapse of Roman knowledge and civilization, and provides an other-worldly theology that supports a generally peaceful if stagnate feudalism.

With Aquinas the process begins for the West to take off with unprecedented progress and change.   We saw it start with Giotti, whose work was just 30 years after Aquinas died, through Galileo, and now the globalized world of smart phones and materialism dominant.