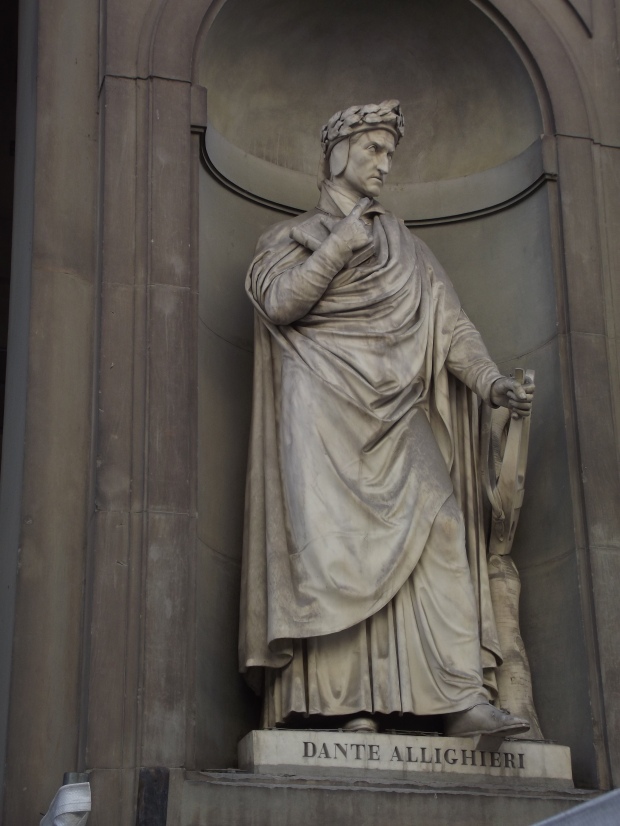 Statue of Dante outside the Uffizi

The works of  Petrarch, Dante and Boccaccio in the 1300s foreshadowed the dramatic change western civilization was about to undergo and revolutionized literature even before the development of the printing press.   This was an essential part of the cultural and intellectual transformation sweeping Europe. 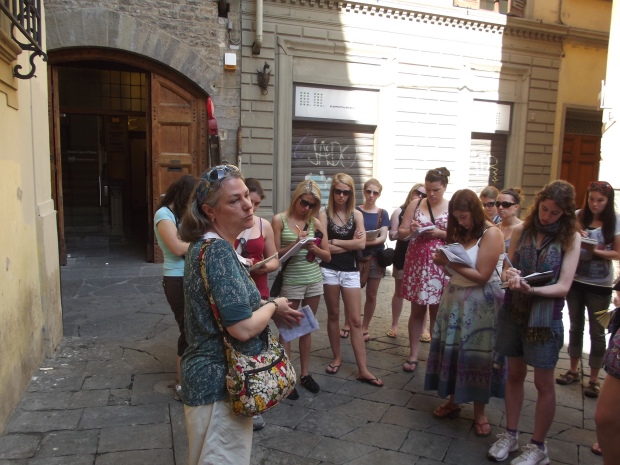 Luann discussing Dante in Florence, during a Dante walking tour

Giovanni Boccaccio (1313-1375) managed to live to the age of 62 in a century which saw many lives shortened by the plague.   His home of Florence lost as much as 70% of its population in the worst outbreaks.  Francesco Petrarca (Petrach) lived from 1304 to 1374, also avoiding the plague.   He was almost always traveling, gaining the label of the “first tourist” because he did what many then considered odd — he traveled for pleasure.  Both were influenced by the work of Dante Alighieri (1265 – 1321).   Dante had Beatrice as his muse, Petrarch had Laura.   Dante had 100 cantos, Boccaccio’s Decameron contains 100 stories.

Dante’s Divine Comedy was published around 1317, meaning it was about a decade after Giotto’s work in Padova.  Dante started working on it sometime after his exile from Florence in 1301, thanks to a shift in the Florentine political winds.  In fact Dante knew Scrovegni and Giotto, living in Padova for awhile himself.   Some believe Dante assisted Giotto in at least some aspects of his work.  Dante and Giotto each reconciled their humanism with devotion to the Catholic Church.   For all it’s imagery and moments of revenge as he placed personal enemies in various parts of hell, Dante’s Divine Comedy does not contradict Catholic theology.   The punishments fit the crimes, and Paradiso is true love through union with God, deeper any human or romantic love.

But Dante wrote in Italian, not Latin.   He poked fun at authorities and people in the church, even if he remained true to church teachings.   He used over 600 expressing authentic human emotions, and wrote a work that is among the greatest literary accomplishments of European history.

It's not all art, music, politics and literature -- sometimes it's PASTRIES!

Petrarch and Boccaccio were of the next generation, and were friends who wrote each other frequently.   Petrarch has been called the “father of humanism” thanks to his profound and moving poetry, and both Boccaccio and Petrarch led the way to rediscovering the work of the Romans and the Greeks.   They were scholars, admiring the humanism of the ancients and determined to bring it into their world.

Some students went to Pisa, and Luann's Boccaccio seminar was to be in Fiesole, a scenic Tuscan village where the ten Florentines in the Decameron fled to and told their stories. But an Italian Bus strike forced us to find a park in Florence.

Their impact should not be understated.   The Italian language used today was based on the literature of Boccaccio, Petrarch and Dante — Italy was divided until 1861 and had dialects so diverse that people in Naples once thought a northern Italian was from Great Britain, his language seemed so bizarre.

However, their most profound impact is how they helped influence the rebirth of knowledge Europe was beginning to experience.   Who we are as a culture — how we think and what we value — was influenced by these three men.  Images of hell held by both the religious faithful and rebellious teens often come straight from Dante’s Inferno.  Dante originally called it Commedia; Boccaccio added Divina.  All three have influenced poets and writers for centuries.

But while Dante railed against those who had been unjust and corrupt, Petrarch went deeper through introspection and his belief that God gave humans intellect and creativity for each person to use to improve their experience of life.   He remained a devout Catholic, but his shift of focus from the Church to the Greeks and Romans and their humanism helped begin a process that ultimately would undermine the church.

There are worse places we could hold class

The story line of Boccaccio’s Decameron shows one reason everything was about to change .   The plague would wipe out huge chunks of Europe in its multiple recurrences in the 1300s, obliterating many old traditional power structures and creating new opportunities.   This also put the Church in crisis, evidenced by its growing corruption and the split Papacy.  Their emphasis on humanism came just as the old order was severely weakened by an external event.

Boccaccio’s stories and language were often lewd and risque.   Yet the story tellers — the real people fleeing Florence to Fiesole to avoid the plague — are proper and moral.   Like his friend Petrarch, Boccaccio did not see any contradiction between his faith and humanism.    His literature nonetheless broke with traditional forms, even as his stories were based on old folk tales.

Through them Florence emerged from the plague ridden 1300s with a new sense of respect for the Greeks and the Romans, brushing aside the old focus on just the church.   They can’t be given causal credit, of course.   They were part of a cultural change that was sweeping Europe.   Perhaps more important was how Aquinas injected Aristotle into both European thought and the church in the 1200s, as well as the increased knowledge coming into Italy from the more progressive and advanced Islamic world.   The rise of Florence would have as much to do with the Medici’s accounting methods making them the bankers to Europe as the legacy of the literature of the 1300s.

And that’s what makes this travel course so exciting to teach.   We work through how the world was changing and help students move away from simplistic “Petrarch changed the world through his poetry” or “Dante revolutionized literature” claims to a more nuanced recognition that change was coming on multiple levels in art, literature, music and politics.   Something was awaking in Italy, especially Florence, as we get towards the 1400s.   Rather than a force of nature, this was a social force of culture and knowledge.    It expressed itself through individuls, but can’t be explained just by looking at individuals.

What is it?   What was going on?   How do we make sense of it?   The answer may be like Boccaccio’s stories.   Many of them have lessons or morals, but they don’t create a coherent moral code, and some seem to contradict.   We have multiple perspectives, but there is no overarching narrative or causal pattern.    Petrarch’s introspection illustrates the power of reflection as being as important as external forces and patterns.   There is no one way to look at this and explain it.   But as the students come to see, knowing about this, reading the literature, seeing the art, and learning about the past not only shows us something about who we are, but enhances ones’ experience of life itself.    I think that would please Dante, Boccaccio and especially Petrarch.

Often the best conversations about the issues covered in the course occur over meals in small groups! Here Steve (lower left) is probably as knowledgeable about Italian cuisine as he is about music history

This entry was posted on May 23, 2011, 14:22 and is filed under Art, Culture, Education, History, Italy, Religion, Travel. You can follow any responses to this entry through RSS 2.0. You can leave a response, or trackback from your own site.