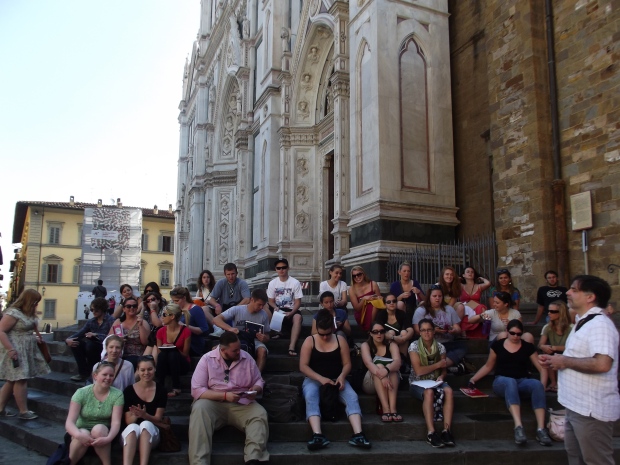 Students at the Machiavelli seminar at Santa Croce

Florence had risen rapidly from the 1300s to near 1500, thanks in large part to the strength of the Medici family whose revolution in accounting made them bankers to Europe, brought wealth to Florence and financed the great renaissance art and architecture we see in the city today.   Today’s two seminars involved two men – Niccolo Machiavelli and Girolamo Savonarola – and two churches – Santa Croce and San Marco.

Savonarola took power in 1494 when the French invaded Italy and overthrew the Medicis.  He played to the emotion of the peoples’ resentment of Medici opulence and wealth which he derided as unchristian at a time when so many in Italy were in poverty.   So powerful was his religious fervor that even the great Botticelli is said to have thrown many of his paintings in the “Bonfire of the Vanities” that Savonarola held — great fires where people burnt material objects that were not godly.   This foreshadowed later book burnings. 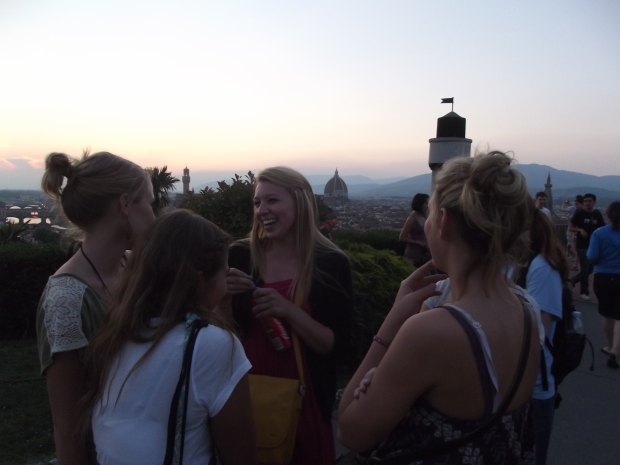 Students at Piazzale Michelangelo, with the Duomo in the background

Gaining a following, Savonarola vowed to cleanse Florence.   Homosexuality had been tolerated, Savonarola made it a capital offense under new “sodomy laws.”   People were forced to take a more puritan life style.   He attacked the Medicis, especially Pope Alexander VI (who, to be sure, was a nasty immoral jerk to put it nicely).   Yet while he rode resentment of the wealth of the ruling class to power, the public didn’t like his puritanism.   By 1497 bars started to serve wine and liquor again, and in 1498 he was excommunicated and hung in Piazza della Signora. 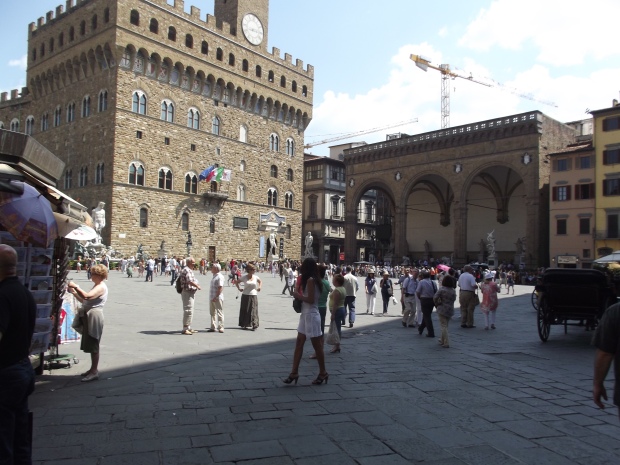 We visited San Marco where the monks including Savonarola had their cells, and Sarah explained the importance of the art work there, reflecting those times.   After Savonarola’s death, Florence had a brief period of Republican rule.   One of its leaders was a man named Niccolo Machiavelli.

I had the students read a talk I gave a few years ago about Machiavelli, linked here.  I’m not going deep into Machiavelli’s thought for this blog entry (no time!), but that link has quotes and examples of his pragmatic realism.   The short version is that after the Florentine Republic fell Machiavelli was exiled and published The Prince, a practical how to book on politics. 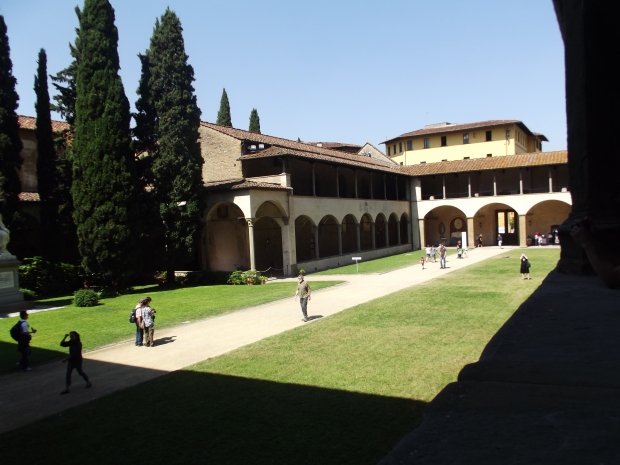 The serene grounds within Santa Croce

Some consider him the first political scientist because Machiavelli makes clear that he is not worried about what ought to be, but what actually is.   And the world around him — Italy fragmented, divided and insecure, the public being seduced for awhile by a religious extremist like Savonarola, and the demise of the Florentine Republic — did not reflect anyone’s conception of an ideal society.   Rather than follow the philosophers in trying to determine what the “good” should be, Machiavelli said its more important to figure out how the world works — how to play the game and win.

As I noted in a blog entry from the last Italy trip, Machiavelli is no Hitler (that blog goes into the details of his thinking more).   He wanted a Republic where people could have peace and prosperity.   To get that, however, Italy had to first gain security and develop a strong state.  He saw that if Italy didn’t unify and develop a stable state, the fragmented divided statelets of the peninsula would fall into stagnate squabbling while the rest of Europe would rise ahead.  But to get security you needed a strong leader who wouldn’t let morality get in the way of achieving the end of having a secure state.   In that Machiavelli makes a clear consequentialist “the ends justify the means” argument.

Again, read the links above for more on Machiavelli’s specific thought.  In this post I just want to reflect on how Savonarola and Machiavelli foreshadow the darkside of the growing humanism that Giotto’s work represented the start of.    Savonarola was a reaction to the increasing distance between the new humanist ethos of the renaissance and old strict ways of the Church.   Tradition was being challenged, change and diversity were accepted.  The good side was that this meant more freedom, as reflected in the issue of homosexuality.   The bad side was that this meant more class division and a pre-occupation on the material, as reflected by church corruption and the power of the Medicis.

Humanism embraced realism.   Just as the art and sculpture became more realistic, Machiavelli’s guide to politics reflected a desire to do what would work, even if were not right by moral standards.   In Machiavelli we see an overt move to relativism, as a Prince has to navigate the waters he finds rather than try to create an ideal polity.

Savonarola and Machiavelli are extremes that show divisions with us to this day.  I couldn’t help but think of Osama Bin Laden as a Muslim Savonarola, with authoritarian governments like the Saudis using Machiavelli’s methods.  One is a desire not to give up the old and in fact react to change by embracing an extremist and reactionary world view.   The other is to try to protect the new order by using any means necessary, fearing chaos and disarray.  The relativism in Machiavelli also reflects a dark side of this change — there is no new moral standard replacing tradition.

The students seem drawn to Machiavelli’s thought, it has the kind of pragmatic approach that has defined US politics and foreign policy for generations.   This shows me that despite 500 years of development since those early days of the pre-enlightenment, we still haven’t found a new moral code.   Reason alone can’t provide one, nor is there any proof of there existing an ethical code that can be derived from nature.   Those who claim there is one are rarely able to put up an argument to defend their position – they dance and weave a lot.  That leaves the door open for new Savonarola’s, like perhaps a younger Pat Robertson type.

This brings the conversation to the present.   We’re not just looking at historical figures dealing with 500 year old problems.   These are dilemmas we’re still working to solve, as relevant today as they were then.

I’m learning more, for instance, about a show I never saw before, Jersey Shore.   Apparently they are right around the corner from us, and one of our students actually talked to them and was on camera — she didn’t sign a waiver though, so they won’t use that footage.   I also got this picture — students say it’s a guy called ‘the Situation’ who “picked up two Italian bimbos.”   One wonders what Savonarola would say about these guys: 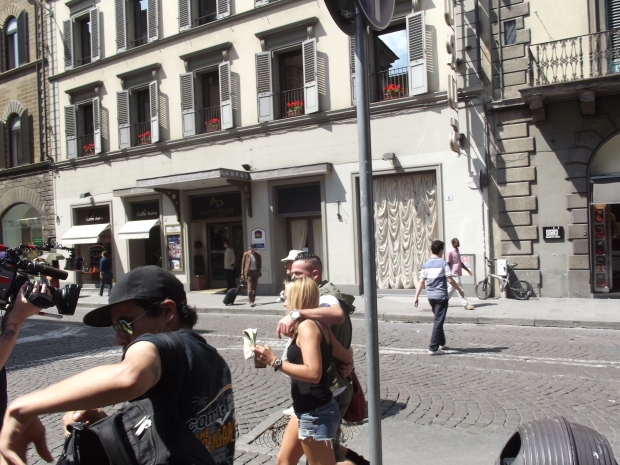 Though after a long hot day of art, politics, and 13 miles of walking, we ended with the best Gelato in the world, from Gelateria dei Neri.  Buona Notte! 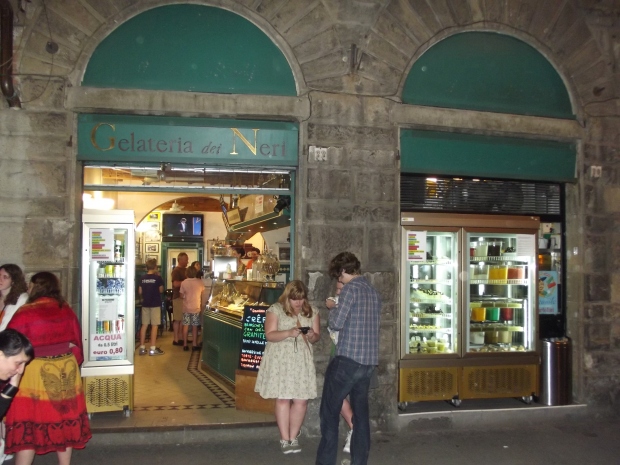 Gelateria dei Neri in Florence - best gelato in the world!

This entry was posted on May 21, 2011, 22:39 and is filed under Economy, History, Italy, Political Science, Political thought, Travel, Uncategorized. You can follow any responses to this entry through RSS 2.0. You can leave a response, or trackback from your own site.