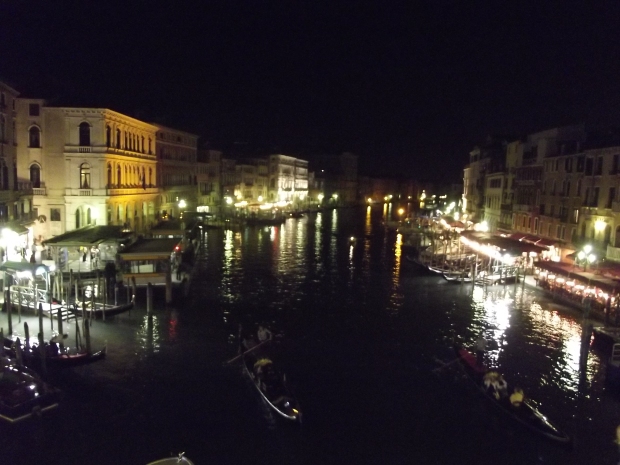 Venice has a history of independence and prosperity.    After the fall of Rome the city maintained relative independence from the Church, and its citizens enjoyed for what that era was enlightened governance.  As such, the city prospered.

Now a days Venice is a tourist mecca.   Very few people living on the island aren’t involved in the tourism business, and the city has been called a “thinking person’s Disneyland.”   And one can certainly see why — almost everything on the island caters to tourists, Venice is no longer the independent, prosperous polity it once was.

Yet, perhaps that vision of a once great city reduced to having to satisfy tourists who rarely understand the treasures they are admiring (or at least noticing) is misguided.   That thought occurred to me when my colleague Steve told me (and the class) that little has changed through time — many of the sounds and activities you’d see from atop San Marco are the same.   Sounds of commerce, music, people mulling about the piazza. 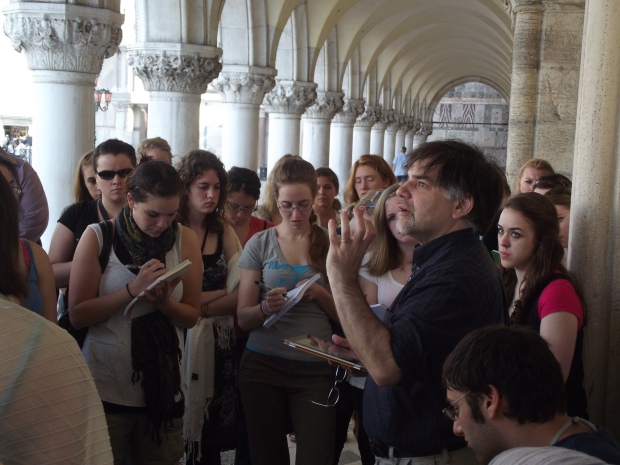 Perhaps, though I have a different angle.   You can only truly experience Venice if you consider it as a whole – past, present and future merge. 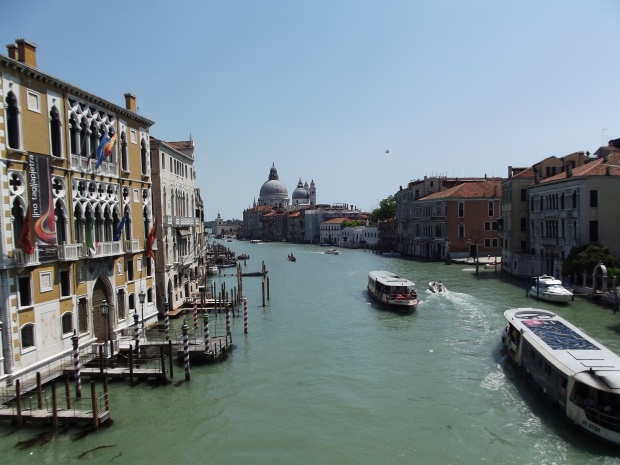 The Grand Canal from Accademia bridge

This canal scene may be little changed over hundreds of years.  Differences exist, but are outweighed by similarities.   New technologies, new people, but the same city.   I pondered that as we waited in line to go into San Marco.   I didn’t go in (I’ve been in many times) because as we got there students with back packs realized they couldn’t go in without shedding their backpack so I volunteered to sit outside “guarding” them for an hour and a half.    Sitting there I observed the piazza.

Groups of Japanese tourists came by, snapping pictures and taking in the scene.   An American woman in shorts was denied entry to the church (they let in some shorts, but hers were tight and short).   Her boyfriend proceeded to yell at them and stand there giving the guards and San Marco the finger with both hands.    Last night a young American woman in the WC started screaming at the attendant who was doing something to slow.  She put her money on the device (bathrooms in Venice are 1.5 Euro – over $2) and went under the turnstil.   The attendant shook her head, and had to adjust something.   Nice.   You want to know where Americans get their bad reputation – people like those two ruin it for the rest of us!

I watched.  I thought about the people going by, school children taking a day trip to Venice (presumably from nearby regions in Italy).   Very sophisticated looking tourists with sleek clothes and nice shoes along side a flabby American dressed in a t-shirt, cutoffs and nikes.   I started to imagine scenes from different eras.    Steve talked about how Monteverdi wrote for the church, playing through his Ipad and speakers a bit of music written in 1610.   I noted how at about that time Galileo was first introducing Venetian merchants to his new telescope, standing atop the Campinile to look out to see which ships were coming in order to get a jump on the competition.

It was different then, the buying and selling was for the folk living around there, not tourists.   But it was commerce and human action.  I realized that the only way to feel Venice is to appreciate its totality; to think of Venice as encompassing all times.  As I stood at San Marco I tried to imagine the Venetians taking the Counter Reformation in their own more independent direction, with young Galileo beginning experiments that would shake the world.   I think of how even in the darkest ages it was spared the depth of stagnation that much of Europe endured thanks to its ability to connect different worlds – Muslims, Orthodox Christians and Catholics bought and sold here — and probably some Buddhists and Hindus too.

Venice had a relatively enlightened government compared to the rest of Europe (the Pope once tried to ex-communicate the whole city), with more vibrance and diversity than elsehwere.   Venetian tolerance was well known and profitable.  Now, ironically, it survives into a modern era that has made its old way of business obsolete by adapting its strengths to the 21st century.   It still buys and sells, it is still visited from people the world over.  Now it is tourism, showcasing the city’s unique history.

And I’m OK with that.  I’m OK with the stands, the commercialism and even the excesses.   It seems more real than a shopping mall whose existence is predicated on excessive material consumption.  Venice has always been a place of commerce, and it uses that to survive.

For those who visit just to see beautiful canals and check a place off  their “bucket list,” well, I hope they buy a lot of trinkets and enjoy the tourist menus.  For me, I like to think about the past – the people, events, and eras that make up this city, and give it substance and gravitas even if in the 21st century it appears not much more than a glamorous tourist trap (albeit upscale tourism – the Guggenheim instead of the Mega-ride at the amusement park).

And we four faculty here are trying to help the students learn to appreciate Venice and travel in general at that level.   Not as tourists, but travelers who enjoy exploring the meaning of cultural difference and visit cities with a sense of time travel, experiencing the past and imagining the future through this moment in the present. 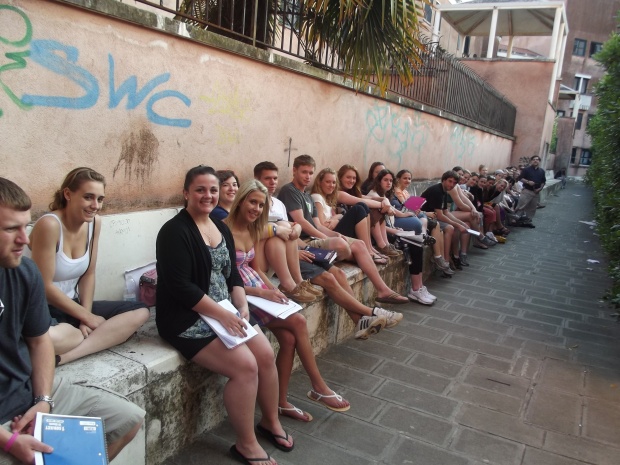 Students ready for my "Italy today"seminar

(Sorry, no photos of me because I’ve got the camera)

Yes, this is an amazingly beautiful city.   But it is also a rich and uniquely important city.   Venezia!   Here are a couple night photos: 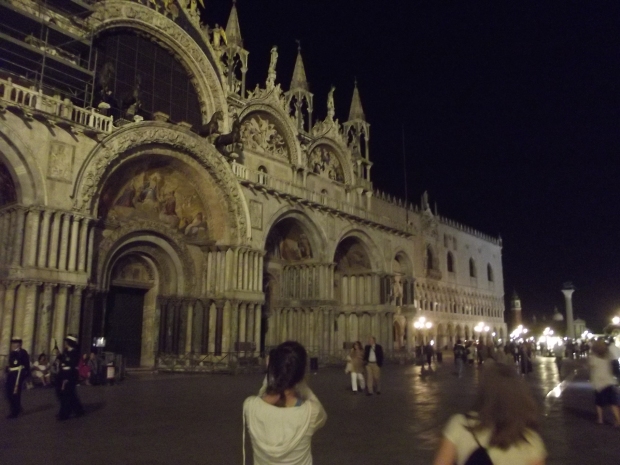 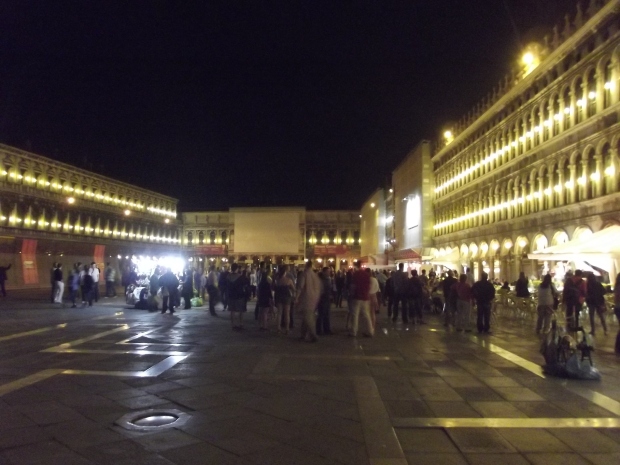 This entry was posted on May 19, 2011, 13:40 and is filed under Italy, Travel. You can follow any responses to this entry through RSS 2.0. You can leave a response, or trackback from your own site.