Tuesday we started on the Missouri River, near Pickstown and the Ft. Randall dam, and treked across the state, heading first to Platte.   There we took Highway 44 across the Platte-Winner bridge, through Winner, and stopped for snacks in White River.   From there we crossed through the Pine Ridge Indian Reservation to the Badlands.  We explored  and hiked there awhile, ending up in Rapid City.   Tomorrow will be a full day exploring the Black Hills before heading once again across the state, this time probably on Highway 14 (which goes through the De Smet, home town of Laura Ingalls Wilder.   On Independence Day last year I posted about her and her family.

Driving across South Dakota, on the highway rather than the interstate, it is amazing how few cars travel those roads.   The speed limit is 65 MPH (on the interstate it’s 75), but often I was going 80, with no other cars in sight.  In 200 miles of driving before hitting the interstate I think I passed only four or five cars.   Not only that, but you could see miles ahead, behind and beside you.  It was truly flat prairie (and farms east of the Missouri river) with endless skies.   West of the Missouri now and then there was a hilly area, but really until the badlands the flatness, lack of trees, and lack of people made it the antithesis of New England.   Towns are often twenty miles apart, sometime with populations under 100. 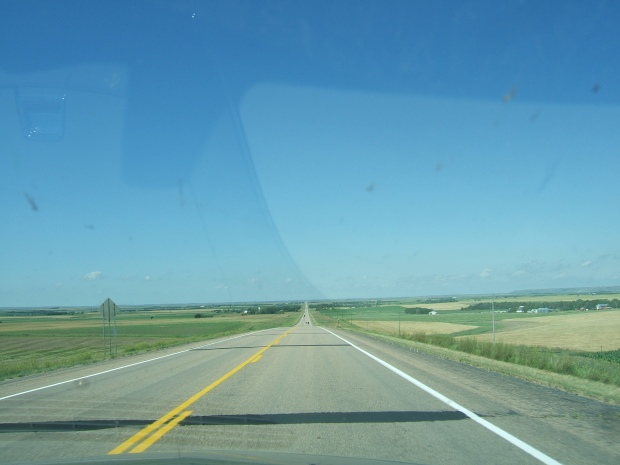 A straight road, no traffic

An exception was Winner.   Winner has 3200 people, and it’s  main street is about eight lanes wide.   It’s normal to have wide main streets out here where land is cheap and plentiful.  The run up to and after the town was a four lane road.   To be sure, Winner is the “big city” serving the vast countryside around it, and had a Subway, McDonalds, Pizza Hut, a grocery store and places to shop (to be sure, no Walmart).  After Winner the next decent size town was White River, where we got a snack.

After White River we entered the Pine Ridge Indian Reservation, the poorest county in America.   In many ways it was no different than the rest of the ride — vast prairies and flatlands — but in the town of Wanblee, where over 70% of the population is below the poverty line, the harsh life style of the remaining Oglala Lakota Sioux was on display.   The houses were run down, we drove by the food bank, and outside of town we saw people walking along the highway — one woman had her baby out on the highway apparently far from anyone building.   Being here, driving on the land of the Lakota, imagining what their life was like 200 years ago, it was sad to witness what their existence now entails.   Such injustice!   But there are no easy solutions.   We can’t undo history, and cultures get caught in cycles which are hard to break.

From there it was into the Badlands.   It used to be free to drive through there, now it’s $15 a car.  We entered via Interior, SD, going through a “recovery dollars” project to renovate some of the roads.   Once in, we had fun.  The boys loved climbing up some of the hills, though it was scary sometimes getting down.  An 8 year old girl and I think her sister gave us lots of advice, and warned us about the rattlesnakes.   After numerous small hikes and scenic overlooks, we got to Wall, SD (a big town of 818).  The Badlands are one of my favorite places to visit, the scenery is amazing.   We ate in Wall, but avoided Wall Drug.  I’ve been there often enough, and wasn’t thirsty for free ice water. 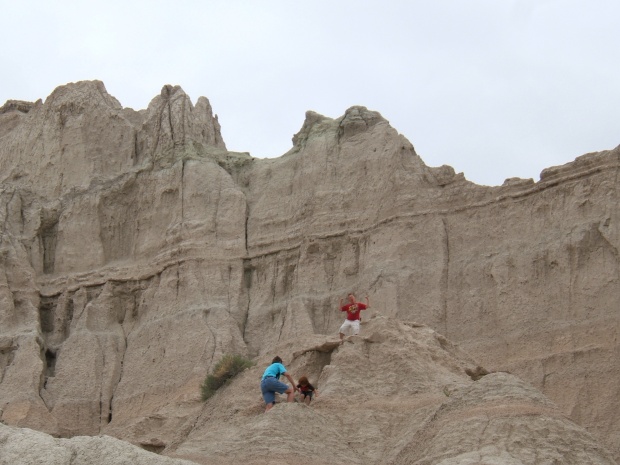 Ryan urging Dana and I to climb higher

Ryan and Dana - Kings of the hill!

From there it was on I-90 to Rapid City.   A treat for me tonight was Taco John’s.   I love tacos, but hate Taco Bell.   We have only Taco Bell in Farmington, and Maine has a dearth of taco places anyway.   Taco John’s has always been my favorite, and so I get as many tacos as I can when I visit South Dakota.   They put the cheese next to the meat, with the lettuce on the cheese, a more logical order than Taco Bell’s weird cheese on top with the lettuce on the meat.   They also make the tacos bigger with more meat and cheese, and put sauce inside on the meat (not making me squirting it from a little package like Taco Bell does).

The kids got a treat too — Dinosaur park.   There are four or five huge dinosaurs the kids can  climb upon on top of a hill overlooking Rapid City (with parts of the city on each side of the hill).  The view is amazing too.   It was twilight when we got there, and the kids had a super time.

Still, what sticks with me about the day was the grandness of the farms and prairies, and being able to see to the horizon lines on all sides, unobstructed by trees or hills.    Totally straight highways with no traffic, one feels a sense of freedom and awe.   It’s certainly clear why South Dakotans tend to be rather libertarian — out here it doesn’t seem there is much need for government, especially if one stays off the reservation.   However, the farmers still like their subsidies, and with a very high miles to people ratio, the state gets a lot of road money.

There’s a sense of history, an ability to feel a bit of what the landscape was like, without the vast build up much of the rest of the country has experienced.  Listening to radio (one advertising “the middle of nowhere dance”), watching the cloud formations (we dropped 12 degrees between Winner and the reservation — and 10 more by Rapid City — as we went through a Cold Front with no rain but plenty of clouds), it was a feeling I don’t get driving through New England.   Maine is beautiful too, but in a very different way.

There’s also a sense of the planet’s history — thinking of dinosaurs roaming here between 245 million and 65 million years ago, while humans have been around only about 60,000 years.   As a species we’re in our infancy, yet seeing the rock formations of the badlands (those about 34 million years old) and reflecting on the prehistoric life that used to live here, one gains a sense of perspective.

Tomorrow we’ll start with Mt. Rushmore and then head into the black hills.  I love it out here!