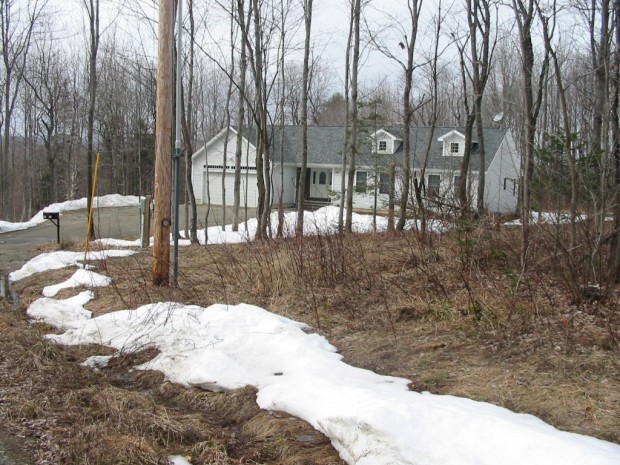 Our house in the woods

Healingmagichands made a blog challenge to go into nature and explore the world at hand.  So I went out of my house today to go for my first walk in the woods around the house and into the backyard.  Except for a path shoveled around the house, most of the winter found the snow too deep for any kind of walk into the woods.  Now, though the snow has mostly melted, I caught the last bits of snow hanging on to the back roof — a roof so covered I was just about ready to go shovel it off in early March before the promise of warmer weather caused me to leave it to nature. 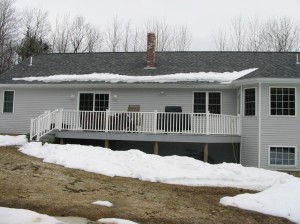 Last bits of snow hanging on

The snow is melting, and we live part way down a hill which heads towards a stream.  That means that water flows from above us to below us, causing spring time to be full of streams and a very soggy back yard.   Luckily the builders did a good job positioning us so the basement — which is finished living space — remains dry.  But the yard is wet!  We have a series of trails near the house which lead down to 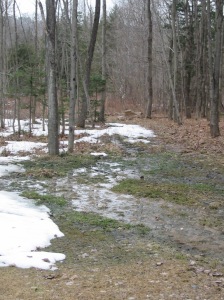 a small river.   I had planned to go there today, it’s not far.  But the mud was a bit too intense, I’ll make it there in a few weeks and post another nature blog.    Below is a view into the woods from our driveway.   The hill on the other side is on the other side of the river.  While I was outside I could hear dogs — neighbors have husky dogs they run on the trials to train them.   Despite numerous hikes I’ve never actually run across them, but at times they can easily be heard!

The woods are absolutely beautiful this time of year, even though one might 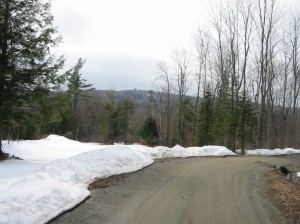 Looking out towards the river (not visible)

think them as barren and sparse.  There is little color; the evergreens provide the only green, the grass poking through the snow is still brown, and the snow adds white.  But this is the moment just before life awakes, the streams of water and disappearing snow banks will soon give way to vibrant green!  Our gardens are ready to come alive!   They are small, though we hope to be part of  a larger community garden the builders started to organize last fall. 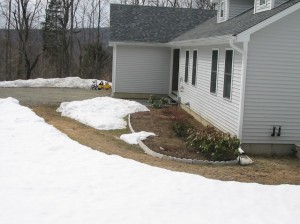 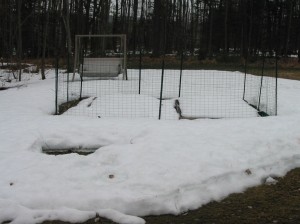 The back garden (protected by deer fence)

The front garden was installed last year.  We bought this house in April 2007, two years ago, and the lawn came up to the house.  Natasha and her dad did most of the work of installing this when her folks visited from Russia last year.  The back garden came into being in the spring.   We have great builders, but they used rocky fill, so it was a pain to dig out these gardens (which we use for veggies, particularly tomatoes and cucumbers, also some spices).   Obviously as the snow shows, we have to wait awhile before getting ready for this year’s planting.

We also are waiting for neighbors.  Thanks to the housing crunch, work on this development has stopped.  Our builders, who own the land and live close by, have yet to sell the house just up from ours, built in the summer of 2007.  The plan is to next build one down a bit from ours, but they’re holding off until that one sells.  It’s very nice.  We want neighbors!  We’re hoping we’ll get some this summer! 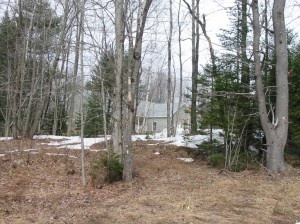 Through the woods, a house for sale

So, no beautiful pictures of flowers, or green landscape.  Yet, somehow, this is one of my favorite times of the year to wander around on the soggy grass.  The air is fresh, and the sound of the water as it forms little streams heading down the hill is magical.   One also gets the sense that a kind of rebirth is occurring.  All of this appears dead, and so far no buds are on the trees, and only a few birds and spiders seem to indicate the coming onslaught of green.    Below is a photo from winter, showing the utter white that defines that season: 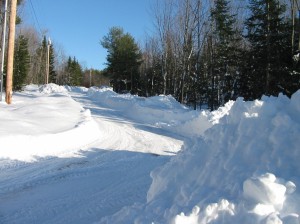 Our driveway in February

I really love winter, the snow stays clean and crisp, and there is something snug about having the house buried in deep snow.  Sure, I have to keep a path shoveled for oil deliveries, and so the meter reader can read how much electricity we’ve used.  And, thanks to extremely heavy snowfall the last two years (last year was worse than this year) I shovel around the foundation to try to relieve stress on the basement when the snow melts. 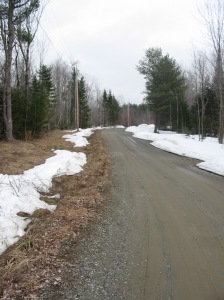 So it was an inspiring walk in nature today, even if the spring awakening is still a couple weeks away.   Ryan, who turns six this Friday, was asking about life in “heavens,” wondering what it is like when we die.  After my walk today I look him to the window and said, “do all those trees, grass and plants out there look alive or dead?”

“Dead,” he answered matter of factly.

“Will they be dead in a few weeks?”  I responded.  He said, no, in summer everything comes alive.

“That’s what it’s like with people too.   We never really die, we just leave this world for another.   And sometimes we come back to this one.   Who knows, maybe you were my daddy in your last life.”  He laughed at that.  My dad died of pancreas cancer at age 60, eight years before Ryan was born.   I thought of my dad as I walked around outside, wondering what he would think of his ‘professional student’ son who was still single and living in a one room apartment despite being over 30 when my dad passed away.   I had my interview scheduled with Farmington before my dad died, and he assured me I’d get this job.  I flew off to the job interview the day after I gave the eulogy at his funeral.   And if this late winter nature tells me anything, it’s that death is not permanent, it’s just a natural transition.